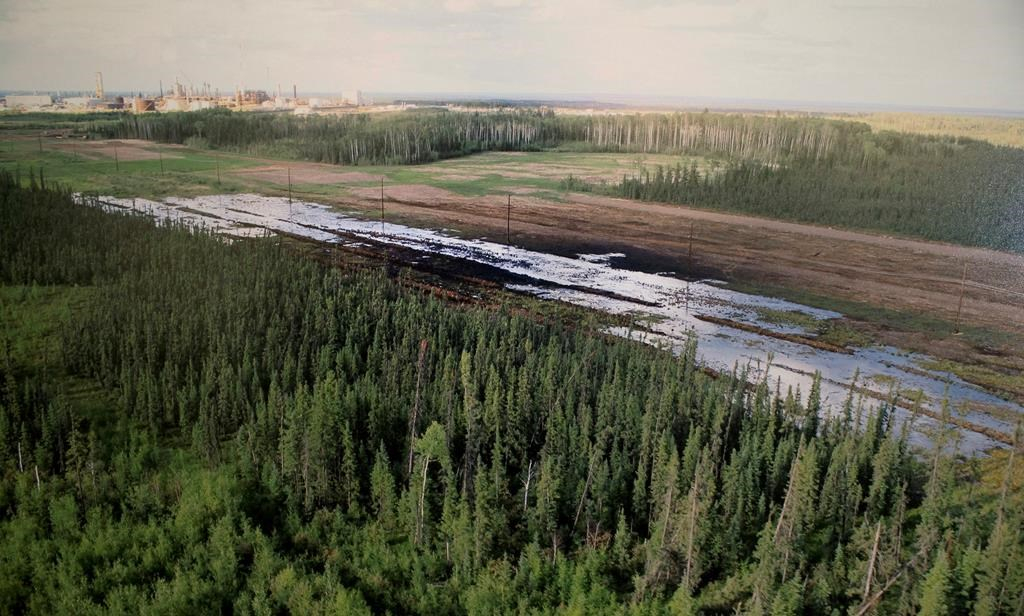 Oil sands giant Nexen has apologized for one of the largest petroleum spill disasters in Canadian history at its facility 35km southeast of Fort McMurray.

“We sincerely apologize for the impact this has caused,” said Nexen vice president Ron Bailey in a press briefing in Calgary Friday morning.

The volume released is equivalent to 31,000 barrels —a volume greater than the 27,000 barrels of oil spilled by Enbridge in Kalamazoo Michigan in 2010, in the worst land spill in U.S. history.

“I’m here to be as transparent as I can be,” said Bailey.

“It is an emulsion line, which means it carries oil —approximately 33 per cent oil —and water and the associated products that come with the formation of water,” the oil executive added.

The oil-water mixture came from the pad site 10km south of Nexen's Long Lake facility. It was headed to an upgrade to make into crude.

Environmental groups wasted no time in blasting the spill.

“It’s a strong reminder that with fossil fuels, no matter what cautions, no matter what the reassurances, the ecosystem is still at risk of contamination with pipelines,” said John Bennett with the Sierra Club of Canada in Ottawa.

“It’s fortunate this is in a remote area, and it’s contained, but a similar spill along the Kinder Morgan route or the Northern Gateway route could be devastating.’

“We need to re-think transporting fossil fuels thousands of kilometres,” he added.

Nearby Fort McMurray physician Dr. John O'Connor says his biggest question is whether there was dilbit in the petroleum spill.

“They are calling it emulsion, but there’s some suggestion it could be diluted bitumen, which is way worse. Diluted bitumen contains a toxic brew of chemicals that are carcinogenic.

“The unknown is creating anxiety."

A Nexen spokesperson later said the emulsion did not contain dilbit.

The company says it still does not know what caused its 20-inch pipeline to leak such an enormous volume. Just 100 metres from the spill site is a small lake. “We see no immediate impact,” said Bailey.

“Our response team has been on site 24/7 since we identified this, looking to minimize the environmental damage, and to work on site clean-up.”

“The leak has been stabilized, the pipeline has been shut down.”

Nexen says the spill has spread over 16,000 square metres. But most of the oil, it says, is on the pipeline's right of way. There’s no human impact and no residences affected, said the company.

The Gregoire Lake Indian Band, near the hamlet of Anzac 15km to the north of the spill, was notified.

Alberta Premier Rachel Notley, who was in St. John’s, Newfoundland, on Friday for the annual premiers’ meeting, said she has been receiving updates on the spill.

Notley said pipelines continue to be the safest way to carry oil and gas across the country.

"So what it comes down to is we need to learn from the spill," she said.

A spokesman for Alberta Energy Minister Margaret McCuaig−Boyd said she is in regular contact with the Alberta Energy Regulator and is monitoring the situation closely.

"We take a pipeline spill like this one very seriously," her spokesperson Brad Hartle said in a statement.

Nexen was purchased by Chinese state-oil giant CNOOC in 2013 and its president called the Canadian executive team encouraging them to be fully transparent with the details of the oil spill.

March 2015: About 2.7 million litres of condensate used to dilute heavy oil was discovered near the muskeg's surface at Murphy Oil's heavy oil site, 80 kilometres northeast of Peace River. The company said the spill occurred over an extended time period. No harm to wildlife was reported.

November 2014: Canadian Natural Resources said a mechanical failure led to a spill of 60,000 litres of crude oil near Red Earth Creek in northern Alberta. The company said most of the spill was contained on the company's land and a nearby pipeline right of way. No report of harm to wildlife.

April 2014: A pipeline owned by Canadian Natural Resources spilled 70,000 litres of oil and processed water northwest of Slave Lake. The spill was described as not being near any people, water or wildlife.

July 2013: Canadian Natural Resources identified four sites where a bitumen-water mix had been seeping from an old well at the company's oilsands project on the Cold Lake Air Weapons Range. At least 1.5 million litres of bitumen were recovered. At least 100 animals died. The Alberta government issued environmental protection orders and limited the amount of steam CNRL pumps into the reservoir.

May 2013: An Apache Canada pipeline in the Zama City region of northern Alberta leaked 15 million toxic litres of process water heavily contaminated with salt. Another 1.8-million-litre leak of waste water was discovered the following October.

June 2012: Some 461,000 litres of oil from a Plains Midstream pipeline leaked into a tributary of the Red Deer River from an underwater pipe cracked by high water flows. Gleniffer Lake, a man-made reservoir popular with water recreationists, was closed for nearly three weeks. A marina and campground were also closed, fishing on the river was shut down and drinking water was trucked in. The province's regulator concluded the line had not been adequately inspected.

May 2012: A leak that went undetected for days from a Pace Oil and Gas waste disposal line released about 3.5 million litres of a water-oil emulsion into muskeg near Rainbow Lake close to the Northwest Territories boundary. It was discovered when an aircraft from another oil company made a routine flyover.

April 2011: A poorly welded and highly stressed section of the Rainbow pipeline owned by Plains Midstream cracked and spewed about 4.5 million litres of oil into low-lying marshland near the northern Alberta aboriginal community of Little Buffalo. Only a beaver dam prevented the oil from spreading beyond the spill site. School in Little Buffalo was canceled for several days over odour concerns. Damage was described in court as significant.
---

With files from Canadian Press.