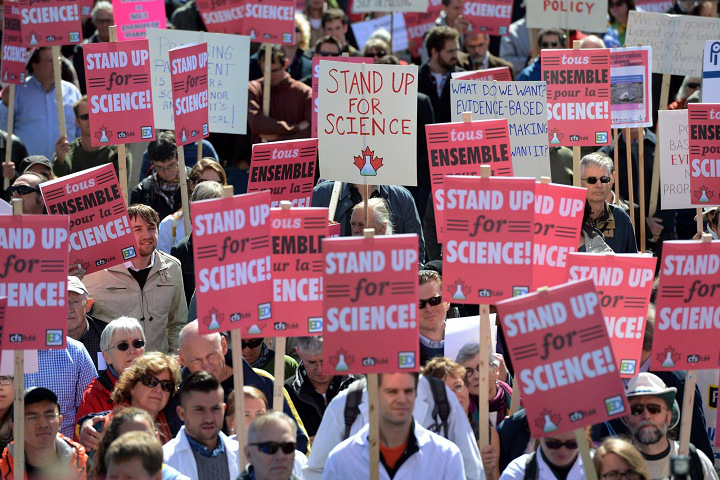 Photo from Evidence for Democracy
Previous story
Next story

As a researcher, I have been following with great interest and deep unease the ongoing story of the federal government’s fight to prevent federal scientists from freely sharing the results of their work.

This government has used a culture of fear— achieved by de-funding, and the strategic dismissal of key leaders— as a means to suppress the flow of information from federal scientists. This ‘muzzling’ of researchers has been noticed in Canada and indeed around the world.

For all of these reasons, I was highly suspicious, and unfortunately not the least bit surprised, to learn that Dr. John Wilmshurst, Resource Conservation Manager for one of Canada's most precious natural resources, Jasper National Park, had been fired.

Dr. Wilmshurst is the same scientist who was quoted in the Canadian Press around this time last year for his observations regarding the rapid shrinking of the Athabasca Glacier within Jasper National Park.

It is a mystery, but it is also tempting to connect the dots: federal government scientist notes environmental issue relating to climate change, communicates that information to the press, and about a year later that scientist is summarily fired.

Is this yet another skirmish in the government’s ongoing war on information? It could scarcely be more obvious by now that this government does not welcome information, particularly when it reveals instances of economic weakness, environmental decline, or both. Indeed, Jasper’s success as a park and a town that attracts two million visitors a year is directly connected to its fragile environment.

The role of scientists is to acquire and communicate information. In fact, scientists generally believe that it is their responsibility to publish or otherwise publicize data they perceive to be important to the public interest.

No scientist paid with public funds should be compelled to filter the information they collect away from the public simply to keep our politicians happy. We all have the right to decide for ourselves what information is of value. That our government appears to be working so very hard to keep information from us should be deeply troubling to all Canadians who value their democracy and the roles of our institutions within it.

Yet another federal scientist fired may be lost in the noise of the daily news cycle, but as a scientist, I cannot let it pass without voicing my concern for the overall trend. The government of Canada seems to be fighting hard to not just spin but actually suppress the flow of information that we all require to effectively engage in the conversation about the state of our expansive, shockingly beautiful, and vulnerable country.

This is fundamentally undemocratic and even dangerous in the long term, particularly if we allow ourselves to become accustomed to it. Don't underestimate the insidious decay that will ensue if we continue to allow this government to bury information vital for our nation's integrity.

I sincerely hope that Canadians seize the opportunity this October to elect a smart, science-friendly government that respects our democratic values of transparency and accountability.