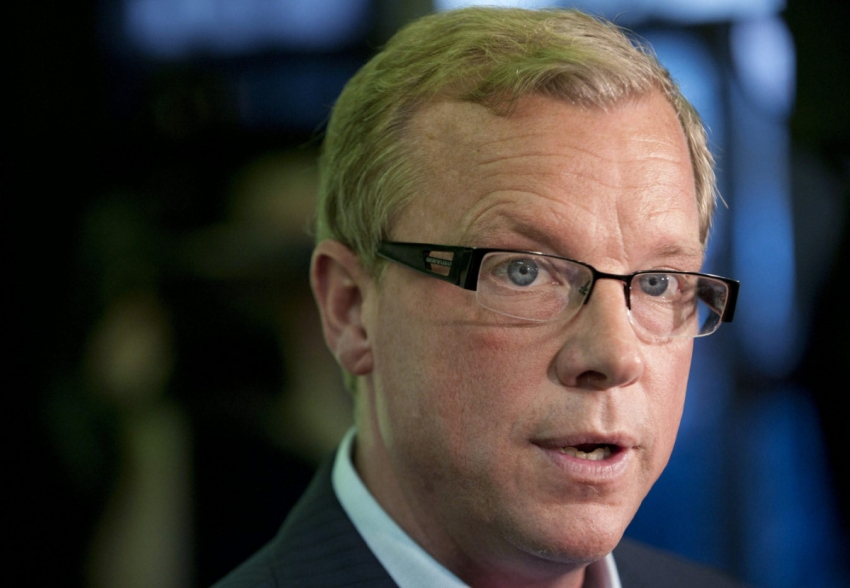 Being a salesman for the oil and gas industry in Canada is not a new role for Saskatchewan Premier Brad Wall.

He’s been Stephen Harper’s right hand man on this and other files for a long time. In fact, one commentator recently predicted he would take over from the prime minister when Stephen Harper leaves political life.

At last week's provincial premiers’ annual summer conference, held this year in St. John’s, Newfoundland, the provincial and territorial leaders finally rolled out a Canadian Energy Strategy, a 40 page document first proposed three years ago, which outlines their collective sense of how energy systems should develop in Canada.

But Brad Wall didn’t like it, and insisted on changes in the final version.

Brad Wall apparently nearly didn’t sign on to it because the strategy didn’t praise the oil and gas industry enough. His mantra was “oil is not a four letter word.”

Thanks to fossil fuel boosters like Wall, the premiers mention climate change and renewable energy prominently in the report, but carefully avoid any mention of actual stated targets for lowering greenhouse gas emissions and concrete goals in shifting to renewables. Targets were explicitly advocated in a draft of the document, but all mention of them was expunged from the final version.

Wall is looking increasingly isolated among provincial leaders in his unceasing defense of the oil and gas status quo, especially in his relationship with Alberta’s NDP Premier Rachel Notley, whom he accused at this meeting of exercising a veto over new pipelines, a comment she called “ridiculous”.

Perhaps Wall is a bit touchy about fossil fuels because Saskatchewan produces more greenhouse gases per person than any other Canadian province, and is one of only three provinces whose emissions have risen since 1990. The province contains only 1 per cent of the country’s population, but produces a disproportionate 10 per cent of national emissions.

Only two provinces – Ontario and Québec – have lowered greenhouse gas emissions in that same period.

To bolster his defense of the fossil fuel industry, Wall points out that oil has, in the past, funded “innumerable social programs” as well as transfer payments to other provinces.

Just like he would be correct to say that the tobacco industry supported all sorts of laudable activities and cultural events – concerts, sports activities and scientific research – until we realized that tobacco’s harms far exceeded its putative benefits, and until it was revealed that many of the industry’s claims were just aggressive protection of its bottom line.

Our knowledge of the world in which human society is situated is changing, and the new evidence says: greenhouse gas emissions have to come down, and soon, if planetary processes are to be stabilized, and the human project is to continue with a measure of security and wellbeing.

In a column in the National Post, Murphy decried what he called “holding Canada’s major job-creating industry hostage to the ideology of an aggressive and debate-intolerant global warming industry,” falling back unconsciously on 18th century economic theory that places the human economy in a separate universe from the ecosystem – a word that was only coined in and around 1935, and appears to have not yet entered Rex Murphy’s otherwise expansive lexicon.

Murphy himself is enamored of the fossil fuel industry in large measure because he feels it rescued fellow Newfoundlanders devastated by the collapse of the cod fishery, conveniently forgetting that the collapse occurred because of a profound politically motivated denial of scientific data and empirical observations about declining cod stocks – a denial that, in its bloody-minded enormity, easily rivals his and Brad Wall’s current de facto climate change denial.

Close connection to Harper and the fossil fuel industry

Brad Wall has distinguished himself by his close and intimate relationship with both the fossil fuel industry and with Stephen Harper.

His former Minister for Energy and Resources, Tourism Saskatchewan, Trade and SaskEnergy Incorporated, Tim McMillan, previously owner of an oil industry service business, resigned his political role on Oct. 30, 2014, to take over as CEO of the Canadian Association of Petroleum Producers (CAPP), the powerful oil and gas industry lobby group that clearly shapes Stephen Harper’s policies.

In his first speech as CAPP’s boss, McMillan blithely opined that “energy is something like hockey and beer we can all be proud of" while studiously avoiding discussion of serious impediments to the industry, like President Obama’s rejection of the Keystone XL pipeline or the impact of low oil prices.

Another Brad Wall minister, Nancy Heppner, a former staffer for Stephen Harper from 2002 to 2005, was elected as an MLA in Wall’s Saskatchewan Party in 2007, and quickly promoted to his cabinet. She was his Minister of Environment in 2009 when The Management and Reduction of Greenhouse Gases Act was passed, that substantially reduced the previous NDP government’s target for lowering greenhouse gas emissions.

Brad Wall – now closely linked not just with the prime minister but also with BC’s Premier Christy Clark, with whom he shares a lack of interest in the impact of global warming – descended to his lowest political level when on March 21, 2013, he addressed a dinner audience in Prince Albert on a different but closely allied subject.

Wall also said, with respect to the uranium mining industry and First Nations: “You know, the best program for First Nations Métis people in Saskatchewan is not a program at all – it’s Cameco.”

He said this in the face of growing evidence that Cameco, the largest uranium mining company in the world, has caused what many First Nation leaders feel is near-genocide among in their communities from the ill effects of radiation on aboriginal communities and their way of life, and has been engaged in payoffs to those First Nation leaders working for or with the industry, without approval by their constituents.

In the context of the devastating contents of the report of the Truth and Reconciliation Commission, such insensitivity and shameless promotion of another “fossil fuel” extraction industry does not augur well for Brad Wall’s effectiveness as a possible federal leader.

Not with Stephen Harper’s relentless nine-year promotion of Canada as an “energy superpower” looking so sickly with the collapse of global oil prices.

Wall and Harper. A pair of fossilized fossil fuel acolytes who would be best avoided in their next attempt at electoral reincarnation.