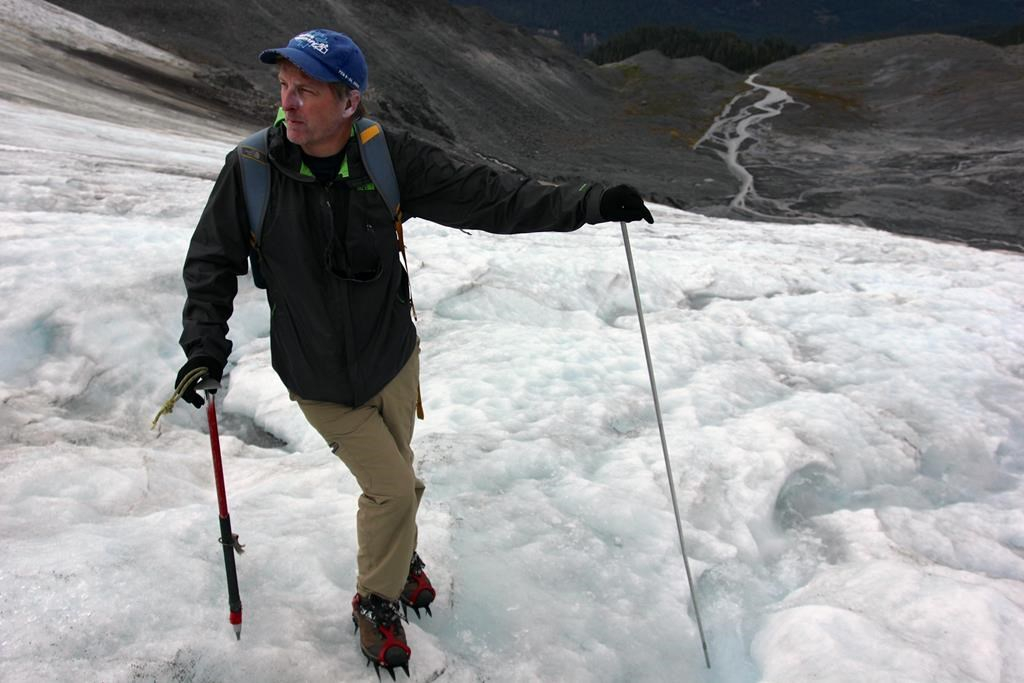 Mauri Pelto digs his crampons into the steep icy slope on Mount Baker in Washington state and watches as streams of water cascades off the thick mass of bare, bluish ice. Every 20 yards, the water carves vertical channels in the face of the glacier as it rushes downstream.

What little snow there was from last winter is already gone, so ice is melting off the glacier at a rate of nearly three inches a day this summer, he said.

"At the rate it's losing mass, it won't make it 50 years," said Pelto, a glaciologist who returned this month for the 32nd year to study glaciers in the North Cascades range. "This is a dying glacier," he said.

Glaciers on Mount Baker and other mountains in the North Cascades are thinning and retreating. Seven have disappeared over the past three decades, and the overall volume of glaciers in the range have lost about one-fifth of their volume.

The shrinking glaciers here mirror what is happening around the U.S. and worldwide: as the planet warms, glaciers are losing volume, some faster than others.

Two of the largest glaciers in Yosemite National Park in California have retreated over the past century, losing about two-thirds of their surface areas. In Alaska, a recent study of 116 glaciers estimated they have lost about 75 billion metric tons of ice every year from 1994 to 2013. In Montana, scientists are already seeing the impacts in increased stream temperature and changes to high-elevation ecosystems. In 1850, there were 150 glaciers at Glacier National Park; now there are 25.

"These glaciers are, from a geological standpoint, rapidly disappearing from the landscape," said Dan Fagre, a research ecologist with U.S. Geological Survey stationed in Glacier National Park. "They're so small and vulnerable that they could be gone in a matter of decades."

Glaciers —thick masses of accumulated snow that compress into ice and move — are important indicators of climate change because they are driven by precipitation and temperature.

The glaciers on Mount Baker, a volcanic peak about 125 miles northwest of Seattle, provide a critical water source for agriculture, cities and tribes during the late summer. The icy glacial melt keeps streams cool for fish and replenishes rivers during a time of year when they typically run low.

For the Nooksack Indian Tribe, which has relied for hundreds of years on salmon runs in the glacier-fed Nooksack River, a way of life is at risk. Without that glacial runoff, rivers will dry up more quickly and warm up faster, making it harder for salmon to spawn or migrate to the ocean.

"Climate change will impact the ability of tribal members to harvest fish in the future," said Oliver Grah, water resources manager for the tribe, which has teamed up with Pelto. They want to know how glacier runoff will affect the river's hydrology and ultimately fish habitat and restoration planning.

On a recent day in August, Grah and colleague Jezra Beaulieu hiked five miles into the Sholes Glacier to study how climate change will influence the timing and magnitude of stream flow in the river. It's their fifth field trip to the glacier this summer, and each time they're amazed at how rapidly the snow and ice are melting.

Grah strings a measuring tape across the stream, wades in shin-deep in the fast-moving, brownish water and measures the depth of the water streaming from the toe of the glacier. He calls out numbers that Beaulieu records in a yellow notebook. They're trying to calculate how much flow and sediment is coming from the glacier.

"This is a frozen reservoir that yields water all summer long," said Pelto, a professor of environmental sciences at Nichols College in Dudley, Massachusetts. "So you take this away and what are you going to replace it with?"

The tribe also is collaborating with Western Washington University, which is using data collected in the field to model what the stream flow will be like in the future.

"The late summer flows controlled by melting glaciers are predicted to decrease as the glaciers get smaller and smaller," said Robert Mitchell, a geology professor at Western Washington University.

This year, a record low snowpack in Washington state and warmer temperatures have made it one of the worst Pelto has seen in over three decades.

"They're losing volume at a faster rate than ever before," Pelto said. "If you can't sustain a glacier at a place like this in the Lower 48 states, there's no hope."