Surprise! Canada's a global leader in one area of climate action 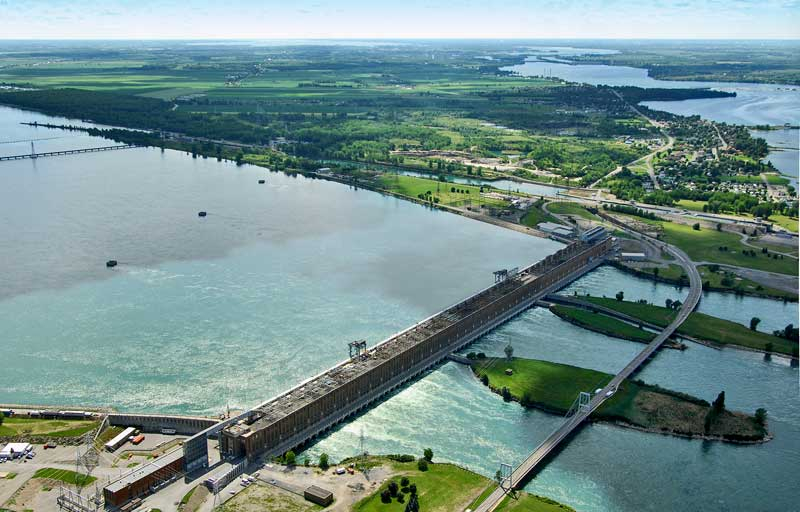 When it comes to the climate crisis, Canada is best known for failing to live up to its international promises. Overall, emissions are rising and the nation is way off course for meeting its 2020 pledge.

But there is one bright spot. Canadians have quietly become world leaders in climate-safe electricity.

Not only is most of Canada's electricity extremely low in carbon intensity—producing an average of 160 tonnes of carbon per gigawatt-hour, versus 500 for the U.S. and 850 for India—but Canadians have recently been at the front of the pack in making it even cleaner.

In fact, Canadians are doing so well that they've already achieved the ambitious goal that US President Obama set for American electricity with his Clean Power Plan. And they did it 15 years ahead of the Americans' schedule.

Here are three charts that tell this rare story of Canadian climate success:

This first chart compares how dirty electricity is around the world. It shows how many tonnes of climate pollution are emitted generating each gigawatt-hour of electricity generation. As you can see, Canada generates some of the very cleanest.

The biggest climate polluters in the world are the 13 nations plus the European Union (EU) shown in this chart. Collectively they dump more than 75 per cent of the world's climate pollution. For humanity to have any hope of preserving a safe and sane climate, all these nations must eliminate climate pollution from their electricity supply. Canada is already far ahead in this critical race.

2: Canadians are a world leader in making it cleaner

Even more impressive than having a legacy of low-carbon electricity is the fact that Canada has recently been leading the pack in making it even cleaner. The second chart shows Canada's remarkable electricity clean-up compared to what each of the other major climate-polluting nations have accomplished.

Canadians have cut the carbon-intensity of their electricity an amazing 32 per cent in just eight years. None of the other nations even come close.

And that is just the beginning of the electricity cleanup for Canada. Environment Canada projects that existing plans will lead to electricity being 50 per cent cleaner than 2005 by 2020.

At that point "85% of the utility electricity supply will be generated from non-emitting sources."

So far all this electricity cleanup has been the result of actions by the provinces. The nation's second greatest coal-burning province, Ontario, just finished a rapid shut down of all coal-fired power plants. Every one.

Their success has been called the single biggest greenhouse gas reduction in North American history. And now Canada's number one coal-burner, Alberta, is seriously talking about following suit.

This is not an isolated phenomenon; it's a cross-Canada trend. As I'll detail in my next article, every province has cleaned up their electricity since 2005.

At the national level, in 2020 a strong federal regulation targeting climate pollution from coal-fired electricity will kick in. Amazingly, this national regulation might not be needed by then. That's because the few remaining provinces that burn coal are acting sooner and more aggressively to eliminate coal pollution.

3: Canadians ahead of Americans…for a change

Down south, the centrepiece in President Obama's ambitious climate effort is his "Clean Power Plan." Its target for America's electricity sector is to "reduce carbon dioxide emissions by 32 percent from 2005 levels by 2030." We are talking about a cut in total emissions, not just a reduction in the carbon-intensity that I've been discussing above.

My third chart shows that Canadians have already been there and done that… fifteen years ahead of the Americans' schedule.

Unfortunately, Canadians' success in removing climate pollution from their electricity supply is being erased by their choice to simultaneously burn lots more fossil fuels in other parts of the economy – most spectacularly in Alberta's tar sands industry.

The result is that overall Canadian emissions are stuck at "much too dirty" at a time when the Americans and Europeans are making significant progress.

In a month the world will gather in Paris to forge a new climate agreement. Already 155 nations representing nearly 90 per cent of global emissions have submitted pledges to make significant cuts in climate pollution.

As the global push to slash emissions grows ever stronger, Canadians are going to need to apply their "can do" success in clean electricity to the other major climate polluting sectors of the economy: oil and gas extraction, transportation, heating buildings and other areas.

Next up: winners and losers in Canada's dramatic clean-energy divide.

In my next article I'll dig into the dramatic clean-electricity divide that separates Canada's provinces, and what it means for future climate progress. As a teaser I'll close with the same chart I opened with, but this time I've added in Canada's cleanest and dirtiest electricity provinces.

Which electricity supply would you prefer for your business and life as we head into the carbon-restricted future? Stay tuned.

Canada's new climate target: the good, the bad and the ugly