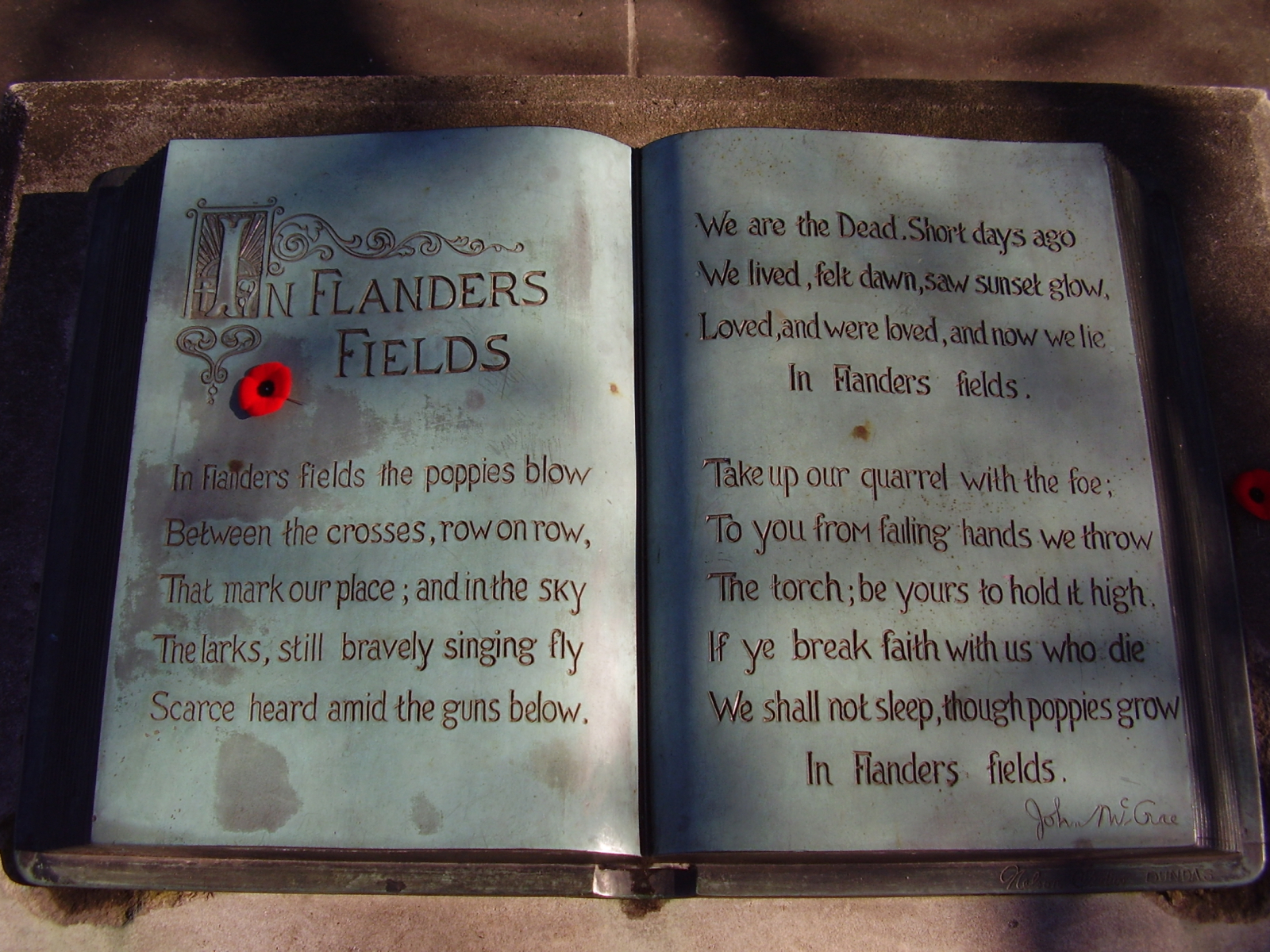 Inscription of the complete poem in a bronze "book" at the John McCrae memorial at his birthplace in Guelph, Ontario, Canada. (Wikimedia Commons).
Previous story

OTTAWA — Canadians paused on Wednesday, as they do every year on Nov. 11, for a moment of reflection, but for those touched by war, like Master Cpl. Gary Barrett, every day is Remembrance Day.

For the veteran of the 1st Battalion, Royal Canadian Regiment, which saw some of the most intense fighting of the Afghan war in 2006 and 2010, the memory of fallen comrades is never far away and in some cases the dull ache has become part of the fabric daily life.

"A lot of us reflect every day," said Barrett who now serves with regiment's 3rd battalion. "There are a lot of people I think about every day; friends that I've lost over there and I'm sure that there are other guys in the same boat who've lost friends and every day they have a thought — or a memory — in mind for a minute or two."

It is a tangible, personal connection to war that fewer and fewer Canadians have, especially with the accelerating generational shift that's seen an increasing number of Second World War and Korean veterans die.

It used to be that somebody's brother, sister, father, mother, aunt or uncle served in one of those wars. But the ranks of stooped, old soldiers, some of them in wheelchairs piled high with blankets, were painfully thin this year during the annual march past the soaring National War Memorial.

The parade was filled out by slightly younger and slightly less grey peacekeeping veterans of the 1960s and 1970s in blue berets. It's been like that for the last few years but was far more pronounced this chilly November morning.

Many of the men who fought Hitler's armies are in their mid-90s.

The changing face of Remembrance Day and the shrinking personal connection doesn't make it any less powerful, said many who attended Wednesday's national ceremony.

Ottawa resident Frank Organ and his daughter Emily joined a procession of thousands who left their poppies on the Tomb of the Unknown Soldier.

War and sacrifice mean something different to the emerging generation and the threat of terrorism, like the Oct. 22, 2014 shooting death of Cpl. Nathan Cirillo at the memorial, give the day a fresh urgency, he suggested.

"With everything that happened last year with the Cirillo thing, we thought it would be honourable to come up here and lay a wreath at the grave of the unknown soldier," said Organ.

He said he doesn't believe people are losing their connection to Remembrance Day, in part, "because of Afghanistan and everything that's been going on over there."

As the great bell in the nearby Peace Tower tolled 11, a solemn, two-minute silence enveloped the crowd around the memorial and the was only broken by the skirl of a piper and the crash of an artillery battery, which belted out a 21-gun salute.

The first guns startled a toddler in the crowd to tears, but the thundering noise stopped moments later and she stared, wide-eyed as a pair of CF-18 jets snarled overhead in a flypast.

A chaplain recited a long list of battles, from Vimy Ridge to Afghanistan, saying the names of the dead must never be forgotten.

Johnston said he is deeply grateful for the sacrifices made by veterans.

"Serving others is never easy, particularly for those who serve in uniform," he said in a statement.

"These women and men risk their lives every day for ideals that we sometimes take for granted. But some things are worth the risk.

"Our freedoms are worth struggling for. Peace is worth striving for. Family and community are worth sacrificing for."

It was the first Remembrance Day for Trudeau as prime minister. He and his wife, Sophie Gregoire-Trudeau, greeted Sheila Anderson, this year's Silver Cross mother representing all mothers who have lost children in military service.

Anderson leaned on a cane as she placed her wreath.

Her son, Cpl. Jordan Anderson, was killed by a roadside bomb in Afghanistan in July 2007.

In a statement, Trudeau paid tribute to generations of sacrifice.

"Members of our Armed Forces — past and present — routinely put their lives on the line for our country," he said. "They represent the very best of what it means to be Canadian."

After the ceremony, he shook hands and took selfies with spectators along the barricade lines.