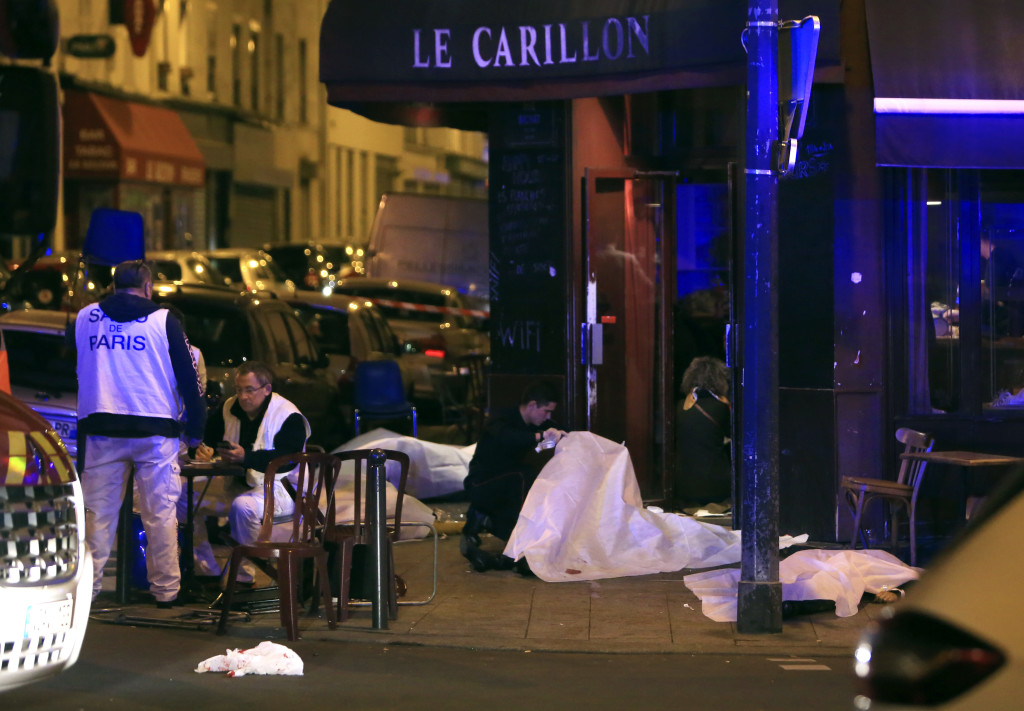 The Islamic State has claimed responsibility Saturday for a series of terrorist attacks across Paris that left 129 people dead on Nov. 13. This is the second terror attack in less than a year on French soil, and occurs only weeks away from global climate talks scheduled to be held in the city.

According to the Associated Press, victims lost their lives at six locations, the deadliest being the Bataclan Concert Hall where an Eagles of Death Metal Concert was underway, with 89 people reported dead.

Some concert-goers were taken hostage but later rescued when French police stormed the venue. Others were killed when several bars and restaurants across the city came under attack. At least three more died in a suicide attack on the Stade de France during a France-Germany soccer match.

Soldiers have now been deployed across Paris as the French government has declared a state of emergency, ramped up border security, and warned locals to stay indoors after the worst bloodshed on French soil since World War II. Officials are saying that all eight terrorists are dead, seven of whom blew themselves up with suicide belts.

Three more arrests have been made on the French-Belgian border and an alleged getaway car recovered. Another three people were taken into custody in the Belgian capital of Brussels.

“Canada stands with France at this dark time and offers all possible assistance," said Canadian Prime Minister Justin Trudeau soon after the attacks. "We will continue to work closely with the international community to help prevent these terrible, senseless acts. Our thoughts and prayers are with the people of France and we mourn their loss."

French President Francois Hollande is appealing to his fellow citizens for "compassion and unity," in the wake of the attacks, but has also vowed a strong response against those who murdered innocent civilians.

"We are going to lead a war which will be pitiless. Because when terrorists are capable of committing such atrocities they must be certain that they are facing a determined France, a united France, a France that is together and does not let itself be moved, even if today we express infinite sorrow," said Hollande, who was watching the soccer match at Stade de France when it came under attack.

"This is an attack not just on Paris, not just on the people of France, but an attack on all humanity and the universal values we share," said Obama, who also condemned the attacks as an "outrageous attempt to terrorize innocent civilians."

IS claimed their latest attack was revenge for French military action in the Middle East and Africa, where its armed forces have battled Islamist militants.

Just one day before attacking Paris, IS claimed responsibility for two suicide bombings in the Lebanese capital Beirut that killed 43 people, targeting a neighbourhood where rival militant group Hezbollah holds sway. Hezbollah has deployed fighters to Syria in support of President Bashar al-Assad against both IS and other rebel groups fighting the government in Damascus.

The terror attacks come just 17 days before the Conference of Parties (COP) 21 talks are due to begin in Paris, but French authorities have already tightened up security ahead of the upcoming summit.

Canadian Prime Minister Justin Trudeau will be attending the talks together with Green Party leader Elizabeth May and other senior political figures from Ottawa.

May herself sounded a defiant note after the attacks, telling National Observer that terrorists would not dissuade her from attending the landmark climate discussions that many are saying is a 'make or break' moment for worldwide action to stop global warming.

"Of course I will attend COP21. I think all world leaders will still come. It is a dreadful tragedy, but I think the negotiations were already planned with tight security," May said. "This will increase that security."

Former US vice-president Al Gore was already in Paris where he was emceeing '24 Hours of Reality' to help step up pressure for global climate action ahead of COP21.

"Out of solidarity with the French people and the City of Paris, we have decided to suspend our broadcast of 24 Hours of Reality and Live Earth. Our thoughts are with all who have been affected and the entire nation of France. We send our condolences to the families of those who have been killed or injured," said Gore in a series of three tweets.

An end to combat mission in Middle East?

The Islamic State first made headlines last year when its forces launched a blitzkrieg across Iraq and Syria, seizing huge tracts of territory and declaring IS leader Abu Bakr al-Baghdadi as its Caliph, or Muslim religious ruler.

Prior to his election, Prime Minister Justin Trudeau promised to end Canadian air strikes against IS in both Syria and Iraq, a military operation that was launched by his predecessor Stephen Harper last year.

Just hours before IS struck Paris, Trudeau issued a mandate letter to Minister of Defence Harjit Sajjan, instructing him among other things to end the combat mission.

The new PM had previously moved to reassure his American allies that Canada was nonetheless committed to playing an active role in the Middle East, which is now expected to focus more on humanitarian assistance for war refugees.

"I spoke with president Obama, and we talked about Canada's continued engagement as a strong member of the coalition against [IS], and I committed that we would continue to engage in a responsible way. But he understands the commitments I've made around ending the combat mission," said Trudeau just after winning election last month.

So far there is no indication that Trudeau will change his declared policy of ending Canadian air strikes against IS in favour of training local ground forces to fight the terror group.

The PM's stance has come under fire from his political opponents, including interim Conservative leader Rona Ambrose who urged Trudeau to rethink his policy of withdrawing from the military coalition currently engaged in combat against IS.

"The signal that it sends to abandon that role at this time is not prudent," Ambrose told media in Ottawa. "It doesn't show our resolute support for our allies at a time when we need to stand shoulder to shoulder with them."

Trapped under IS occupation, Syrians urge world to "stand against terrorism"

In Raqqa, a Syrian city trapped under IS rule, a group of citizen journalists condemned the attack against Paris. There, Syrian activists from the group Raqqa Is Being Slaughtered Silently (RBSS) risked their lives to denounce the bloodshed 2,000 miles away in France, while also urging the world to take a stand against terrorism.

Raqqa has now been under IS occupation for more than two years and is the group's self-styled capital. Under IS rule, the city's Christian minority has been driven out, suspected enemies beheaded or crucified, and homosexuals murdered by being thrown off tall buildings.

Members of Raqqa Is Being Slaughtered Silently continue to risk arrest, torture, and execution by videotaping and smuggling out evidence of IS atrocities in their city.

Story updated with files from the Canadian Press