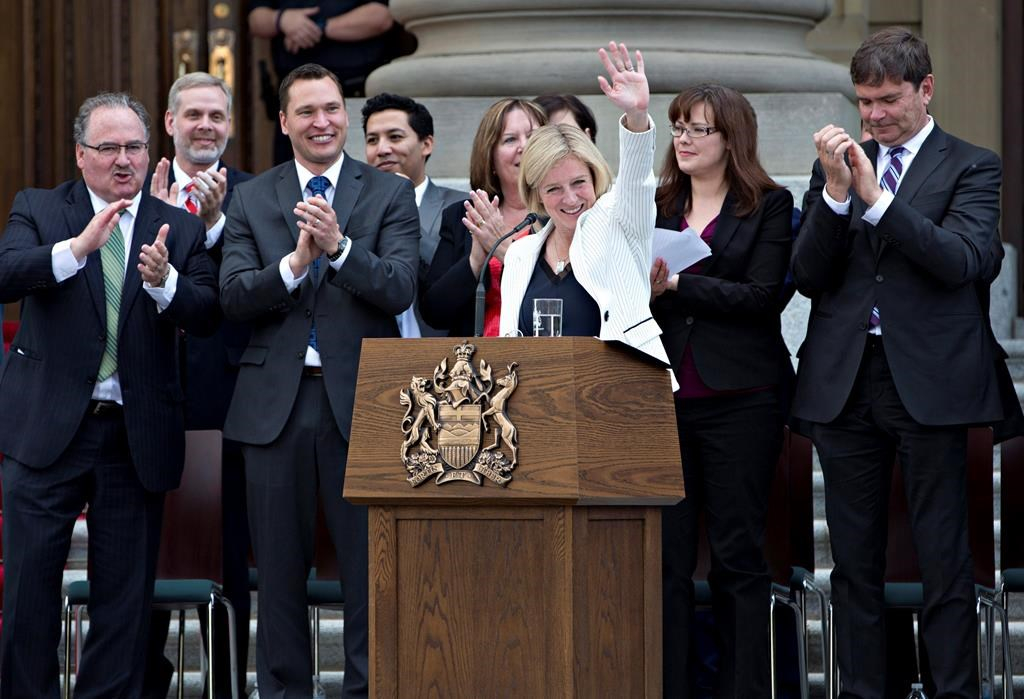 Alberta Premier Rachel Notley announced today that she is imposing a limit on oil sands emissions and phasing out all coal power usage in her province by 2030 in a major push to curb greenhouse gas emissions.

In her Nov. 22 address at Edmonton’s Science Centre, Notley pledged to invest in green jobs, energy, and infrastructure as well as taking steps to protect the health of future generations.

“This is the day we stop denying there is an issue and this is the day when we start doing our part,” said Notley. “Climate change is real, it is caused by human activity.”

She said that anyone in doubt could see the Columbia Icefield glaciers, which are steadily receding as the atmosphere warms. She described Alberta as being on the “front line” of climate change.

Crucially, Alberta Parks and Environment Minister Shannon Phillips announced a 100-megaton limit on carbon pollution from her province's oil sands in a bid to curb emissions, which she said would help reduce the global battle over use of oil sands energy.

"Six million barrels of tar sands per day are currently permitted, but under this plan and under existing technology, half of that — three million barrels per day that would have burned — will now stay in the ground," said Karen Mahon, director of ForestEthics Canada.

"This a game-changer for Alberta and Canada. On the eve of the Paris climate talks Canada is charting a new direction. There is now nothing standing in the way of Prime Minister Trudeau legislating an ambitious national climate leadership plan."

A second key plank of Alberta's 'game-changer' climate action plan is phasing out all coal power generation by 2030, alongside a major shift towards renewable power—a move announced by Phillips today.

Presently, just nine per cent of the province's electricity is sourced from solar, wind, or other renewable power sources, according to the Alberta Utilities Commission.

“The complete phase-out of coal by 2030 makes clear the government of Alberta's intention to improve air quality and to tackle one of our highest-emitting fuel sources," said Ed Whittingham, executive director of the Pembina Institute, a clean energy think tank.

"Given the international attention on coal as an unnecessary source of pollution, the government of Alberta's decision not only protects people's health and saves the province's health care system hundreds of millions of dollars a year, it gives Alberta the credibility to bring a better message and approach to Paris."

"Your plan does that with its 2030 goal," said Whittingham to Notley and Phillips, praising their intent to provide a sustainable transition to coal workers and their families for a low-carbon workplace.

Phillips also pledged that her province would be placing a price on carbon pollution, saying that every jurisdiction in the world had to tackle the issue. To this effect, she promised a revenue-neutral carbon price of $30 per tonne by January 2018, bringing her province more into line with Quebec and California.

Her government will start by levying $20 per tonne on consumers in 2017, but Notley promised that support will be offered to lower and middle-income families to help them meet costs.

Murray Edwards, the billionaire chairman of Canadian Natural Resources Ltd., also voiced support for Alberta's climate plan's addressing of oil sands emissions and was one of the speakers at Notley's address.

“The framework announced will allow ongoing innovation and technology investment in the oil and natural gas sector. In this way we will do our part to address climate change while protecting jobs and industry competitiveness in Alberta,” Edwards said.

The Alberta government's announcement comes just 24 hours before she is due to meet both her fellow provincial premiers and PM Justin Trudeau to hash out Canada’s climate action plan — a meeting that comes one week before the COP-21 climate talks commence.

"Today's announcement by Premier Notley that Alberta will put an economy-wide price on carbon, phase out coal and increase its commitment to renewable energy and energy efficiency represents an inspiring addition to the legacy of leadership and forward-thinking action by Canadian provinces to speed our transition to a low carbon economy," said Al Gore, chairman of the Climate Reality Project and Bill Clinton's former vice-president.

"This is also another powerful signal — well-timed on the eve of the Paris negotiations — that humanity is beginning to win our struggle to solve the climate crisis."

No sooner had Notley and Phillips announced a greener future for Alberta than Oil Change International issued a response, lauding the Albertan climate plan as a result of Canadians demanding a change in policy.

Stephen Kretzmann, Oil Change International's executive director, said that the Keystone XL Pipeline was the first oil project ever stopped because of its climate impacts. He further promised to "continue to work together with our allies on the front lines and across the continent to make sure that no new pipelines are built and no new projects are started. That is what climate science, and our movement, demands."

"The sun is setting on the tar sands industry. It is now possible to see a new day for Alberta where high-cost, high-carbon, high-risk tar sands are phased out in favor of clean, safe, and renewable energy. The idea that tar sands growth is inevitable has left the building. Good riddance," said Kretzmann.

However, Notley flatly rejected the idea that her climate change plan spelled the end for Alberta's oil sands industry, instead aiming to bring their emissions levels down to those produced by non-oil sands crude extraction.

"What our plan is very carefully designed to do is to limit the emissions of the oil sands," Notley told National Observer.

Keep up the tempo, urges Greenpeace

"This announcement is a major victory for people and communities that have long raised concerns about growing tar sands emissions. With the announced cap the government has finally set a limit on tar sands extraction," said Greenpeace campaigner Mike Hudema.

"The days of the infinite growth of the tar sands are over and investors should take note. While the significance of this step cannot be overstated, these limits are still below what the science demands so the cap must be viewed as a ceiling rather than a floor. Alberta, like other jurisdictions, must continue to do more, not less."

But he told National Observer that to keep global warming within the internationally-agreed upon 2°C limit and avoid catastrophe, both Alberta and other jurisdictions had to work towards at least a 30 - 40 per cent emissions cut on 1990 levels by 2030 — and build towards an 80 - 90 per cent reduction by 2050. Crucially, this means tightening up the already significant 100-megaton carbon limit on oil sands producers.

"The 100-megaton limit is historic because it's one of the first times that an oil jurisdiction has put a limit on growth," said Hudema.