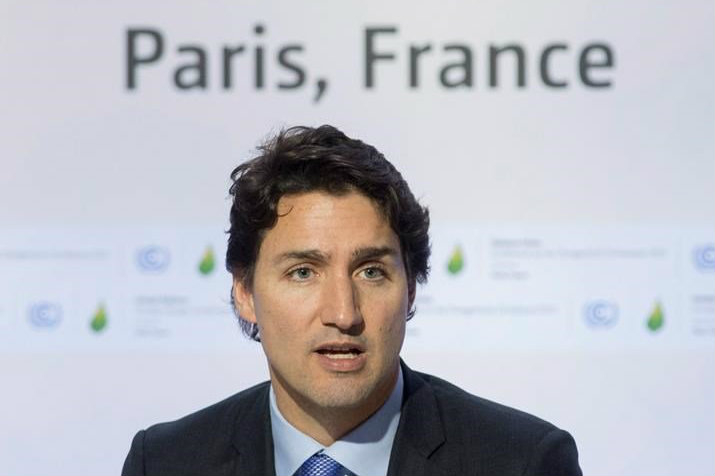 Even though the COP21 climate talks in Paris only began Monday, Prime Minister Justin Trudeau has already made waves, thrusting Canada back onto the international stage amid excitement and applause.

Yet climate experts are quick to point out Trudeau has a lot of work to do to bridge the gaps between the talk and the walk when it comes to meaningful climate action.

The international climate negotiations ongoing in Paris will continue on until the end of next week and onlookers will have to wait to know what shape the final outcome will take.

But for now, here are five numbers you need to know to understand Canada’s role in the world’s most important climate negotiation to date.

The climate talks are intended to bring more than 190 countries to a binding international agreement on climate action designed to prevent the world from warming more than two degrees Celsius.

Although, on the first day of the summit over 100 countries signed a declaration calling upon the global community tokeep global temperature rises to 1.5 degrees Celsius.

Canada so far supports the two degree target, although Trudeau and his delegation have yet to reveal the new federal government’s climate commitments. The current commitments, formulated under the former Conservative government promise to reduce the country’s emissions 30 per cent below 2005 levels by 2050 — although no specific policy measures have been announced to show how Canada will achieve that target (which has been criticized as weak compared to other developed nations).

Trudeau surprised Canadians by taking a large and diverse delegation to Paris for the climate talks. In addition to Canada’s new Minister of Environment and Climate Change, Catherine McKenna, and Foreign Affairs Minister Stephan Dion, Trudeau invited all of Canada’s premiers.

Trudeau has repeatedly stated that Canada’s emissions can only be tackled by working closely with the provinces and tailoring regional climate plans that address the unique challenges each province faces.

Although a strong showing of support for the climate talks signals positive attention, the real policy work will take place in just under 90 days when the prime minister will meet with the premiers to discuss the nitty gritty details, including targets for clean energy and emission reductions.

But the World Resources Institute ranks Canada as the highest per capita polluter in the world, when taking into account emissions from land use and forestry.

According to a recent report by James Hansen, the former NASA scientist that first brought climate change to the world’s attention in 1988, Canada is fourth when it comes to cumulative per capita responsibility for emissions.

The World Bank lists Canada in the top 15 emitters of carbon dioxide per capita. And according to the Pembina Institute, if Alberta were a country it would have the highest per capita emissions in the world.

Canada hasn’t been a positive force at the COP climate talks in recent years. This year, however, Trudeau surprised the climate community by announcing Canada will contribute $2.65 billion to the Green Climate Fund, up from just $300 million under the former Conservative government. (Interestingly this figure is less than the $3.6 billion Canada spends every year subsidizing the fossil fuel industry. )

In his opening remarks on the first day of the climate talks, Trudeau told a crowd of media and dignitaries: “We believe that climate finance is critical. Our commitment to $2.65 billion over five years towards initiatives will help developing countries reduce their emissions and adapt to climate change. These efforts can bring about transformative change through increasing access to energy and poverty alleviation.”

The UN-led climate talks have been ongoing for 20 years. During that time, countries have found it impossible to agree on how a single path forward can suit the interests of so many diverse countries.

According to energy economist Mark Jaccard from Simon Fraser University, one of the most important things Canada can do at COP21 is be realistic about why previous climate talks have seen so much failure.

In the lead up to the COP21 talks, around 150 countries submitted their ‘intended nationally determined contributions’ or ‘INDCs.’

Jaccard says wealthy countries need to strengthen their INDCs and work together (through mechanisms like a shared carbon price) to meet their commitments. He added the wealthier countries could provide incentives (climate financing) to developing countries as a way of encouragement to meet targets.

But individual country commitments don’t really matter unless there is clarity about each country’s progress.

Jaccard recommends Trudeau take his transparency agenda to Paris in order to push for more accountability on a nation-to-nation level. Canada can join other countries asking for an agreement that requires countries to consistently review and improve their climate action.

This story was originally published in Desmog Canada. Republished with permission from author.