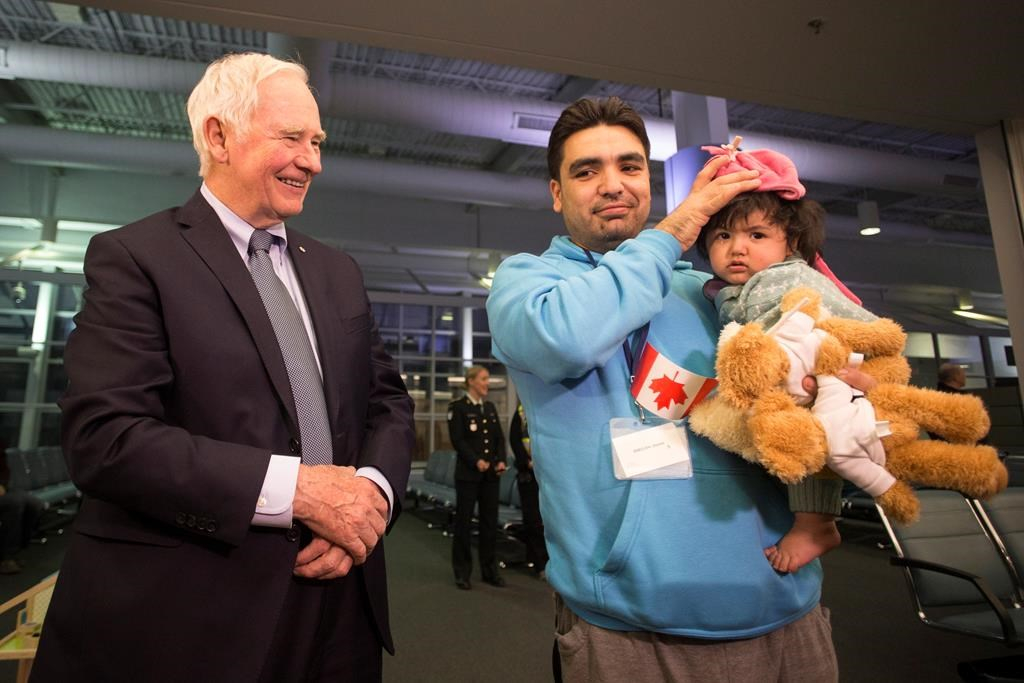 The chartered plane from Beirut, carrying about 214 refugees, was the fourth flight organized by the government as part of its plan to bring 10,000 Syrian refugees to Canada by the end of the year.

"Marhaba," Johnston said repeatedly, using the Arabic word for "welcome" as he, his wife, his daughter and four grandchildren greeted beaming refugee families at the airport terminal where the newcomers were being processed.

One man asked for permission to kiss Johnston, and, when he agreed, gave the Queen's representative a quick peck on both cheeks.

Mohammed Al-Mubaied, saying "hello" repeatedly in English, said through a translator that it was an honour to be welcomed by Johnston.

"The Canadian people welcome you very warmly," Johnston replied as the man's young daughter and son played with his own grandchildren nearby.

Moments later, as Johnston's grandchildren handed out woollen toques to their new friends, Al-Mubaied's soft-spoken wife said through a translator that she was "very surprised" at the generosity of Johnston and his family.

Another refugee family, with two shy young sons and a yawning baby girl expressed similar gratitude, saying "thank you" repeatedly in English as Johnston introduced himself in Arabic.

"We're happy to have you and your family here," said Johnston. "Your children will quickly make friends with children like our grandchildren."

The children's father, who held a small Canadian flag in one hand, said he was very grateful for the support the Canadian people had given his family.

They are a mix of privately-sponsored and government-assisted refugees who are spreading out to settle in communities across the country.

Ottawa has promised to bring a total of 25,000 refugees to the country by the end of February.

Johnston said the Canadian goodwill expressed in response to the Syrian refugee crisis has "great momentum."

"I'm very heartened and believe that we will see it with a strong momentum because it's so grassroots," he said, after greeting the refugees. "It has shown so many Canadians participating in so many different ways."

Johnston added that Canadians were tapping into their traditions when they welcomed all types of refugees — from Syria and elsewhere.

"Wave upon wave of immigrants have come and found this a good land," he said. "We're reaching into our traditions, our history and our most fundamental values, and that we must continue to re-enforce."

The refugees that landed in Toronto on Friday left the airport as permanent residents, with their own SIN numbers as well as winter wear handed out by the government.

Earlier this year he joined two other cabinet colleagues on a similar trip to Jordan.

More than four million Syrians have fled their country since conflict erupted there in 2011.

Sunny ways for refugees arriving in Canada, more delays for those headed to U.S.