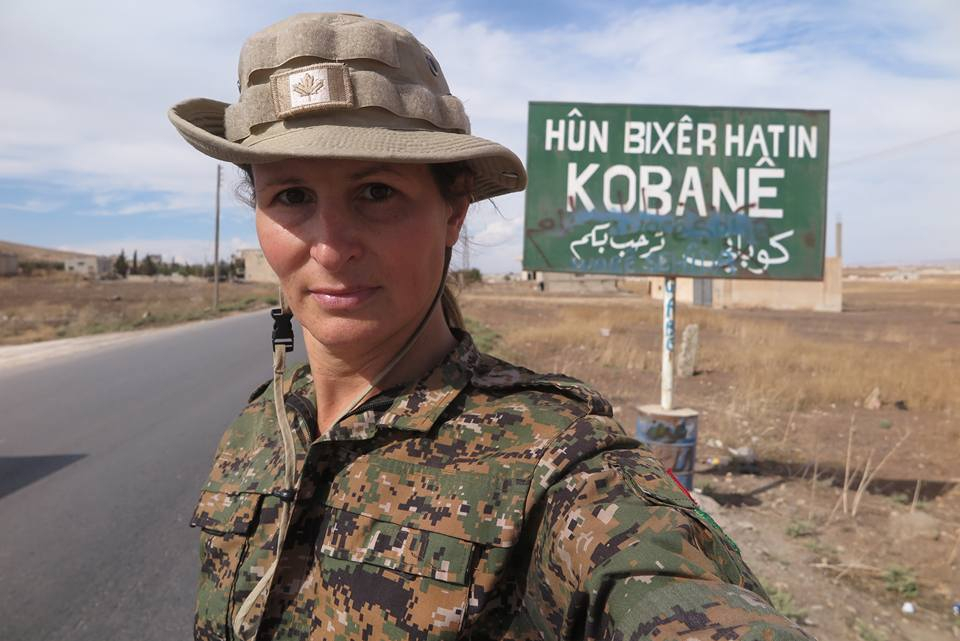 Fighters in mottled green uniforms swarmed into the battered, dusty, streets of Tel Abyad in northern Syria after driving out Islamic State militants in a two-day blitzkrieg.

American fighter jets screeched overhead as jihadist fighters scattered before soldier Hanna Bohman and her comrades in the Kurdish Women’s Protection Units (YPJ) as they swept into Tel Abyad from three sides. Having chased ISIS out of town, Bohman’s YPJ troop had severed a major IS supply route between the Turkish border and their self-styled capital of Raqqa in eastern Syria.

“I was in three taburs, or units, and we fought in Tel Tamir, Suluk, and Tel Abyad. Tel Abyad was the biggest fight for me,” Bohman told National Observer.

The 46-year-old fighter from B.C., also known as "Tiger Sun," is stationed in Syrian Kurdistan — now called "Rojava" by the Kurds. Rojava is not an officially recognized region by Syria's government, but functions as a de facto autonomous region, based on principles of direct democracy and gender equality. Bohman has been fighting since last February to defend the fledgling state in northeastern Syria from the jihadists of the self-styled Islamic State – or “Satanic State” as she dubs them.

The rubble-strewn battlefields of Syria are a far cry from Bohman’s home on Canada’s West Coast, where she used to work as a model and sales clerk, and enjoyed riding motorbikes in her spare time.

But Bohman’s as-yet normal life was jarred by the rise of ISIS in the Middle East. She was shocked by news about their atrocities against civilians, and thought their brutal methods for murdering hostages was “evil beyond evil.” Even more disturbing for her was seeing an online video of John Maguire, a Canadian Muslim convert who incited fellow believers in Canada to take up arms and attack their native land.

"Wherever the internet is available, there will be Daesh [IS's local nickname], so while we've been battling the majority of them, they'll still spread around the world," said Bohman.

During that time, she also learned about the Kurdish struggle for freedom in Syria. It was early 2015, and IS had already seized control of large areas of Iraq and Syria, imposing a harsh Islamist rule on occupied territories that included mass executions and persecution of religious minorities. IS was also battling YPJ forces and their male YPG (People's Protection Units) comrades in the northern Syrian city of Kobane, nearly overrunning the defenders, who were only saved by American-led air strikes.

That’s how Hanna Bohman found herself on a dinghy being smuggled across a river, off to join the YPJ who put her through a few hours of weapons training, before being sent to the front lines.

But her first tour in Rojava ended prematurely. Bohman suffered from malnutrition in June 2015. Used to a Canadian diet, with easy access to protein-rich foods, Bohman had to adjust to the simple vegetarian diet of her fellow YPG fighters, eating only small scraps of meat once every few weeks.

She realized after arriving that the Kurds had a dire lack of medical supplies and doctors to treat the wounded. Bohman saw people dying from survivable battlefield injuries, including one man shot twice in the legs. Bohman saw that she were to be shot or otherwise injured, there would be very little medical infrastructure to save her life.

“We get no Western tactical or medical training or support. When we get shot, we have no medevac, no helicopters, and virtually no combat trauma expertise. So many young girls and boys in the Kurdish force die from survivable injuries because of the complete lack of support,” Bohman said.

But Bohman returned to Rojava last September, saying that she missed the women whom she worked with. This time, she also brought a long-lens camera to document daily life in Syrian Kurdistan.

On her Facebook page, Bohman posted pictures of children in the battered ruins of Kobane, a city that is steadily coming back to life as refugee families return home and shops re-open amid the rubble.

Her photos also offer snapshots of life on the frontline, including one shot of Bohman and another fighter standing next to a battered Humvee.

The seemingly clapped-out Humvee is an apt example of what the YPJ/YPG have to fight with: AK-47s up to 50 years old, no heavy armour or modern anti-tank weapons to fend off IS attacks, and no body armour or helmets for its soldiers.

IS — by contrast — has tanks, artillery, American-made assault rifles, and other vehicles including Humvees that it has captured in battles with the Syrian and Iraqi armies. The latter was trained and armed by the U.S., only to flee before the militants in 2014, leaving behind vast stockpiles of weapons for IS to capture.

So far, Western nations have supported the YPG/YPJ with air strikes during fighting in Kobane, Tel Abyad, and elsewhere, but have sent only small shipments of weapons. The Americans sent both small arms and medical supplies to Kurdish fighters in Kobane, followed by more air-dropped bundles during fighting against IS north of Raqqa.

“If it weren't for the bombing, there would be a whole lot more innocent people getting raped, sold into sexual slavery, having their organs harvested, and getting their heads cut off," Bohman said. "The bombings have also saved thousands of YPG and YPJ lives. We took 4,000 square km in one day last May, and not one of our fighters was lost in direct action with Daesh [the local name for IS] because of the air strikes. The air strikes have definitely changed the direction this war was going."

But Prime Minister Justin Trudeau promised before Christmas to end Canada’s involvement in Western air strikes against IS and will pull out Canada’s six CF-18 fighter jets this year. Bohman remained dismissive of the Canadian government’s pledge.

“The fact is, the millions of people in the refugee camps in Lebanon, Iraq, Syria, and Turkey, went there long before the coalition bombings started, so a call to end the bombings is a bit naive. But at the same time, less planes isn't going to make a big difference, as another country will take up the slack," she said.

Bohman welcomed Western air support, but the Kurdish fighters may not get fresh weapons any time soon. A major reason for this is that the YPJ/YPG is affiliated with the Kurdistan Workers Party (PKK), which has fought a decades-long insurgency against the Turkish government in southeastern Turkey, where most of that country's Kurds live. The group is classified by both Turkey and its NATO allies as a terrorist organization.

Bohman isn't the only Canadian fighting against IS in Syria. Her fellow YPG comrade John Gallagher, a former soldier from southern Ontario, was killed fighting the IS jihadists near the Syrian city of al-Hasakeh last fall.

His body was repatriated to Canada, driven to its final resting place down the Highway of Heroes.

Having now survived at least three battles against IS, Bohman explained why she continued to fight.

“Your freedoms can be taken away from you by radical theology, right-wing paranoia, or government subversion. Stop looking out for number one and start thinking we're all in this together.”

At time of writing it is unclear exactly how many Canadians aside from Bohman and Gallagher joined the YPG/YPJ. However, they fought alongside 56 Americans that had signed up with the Kurds as of September last year.