How do pets keep getting caught and killed in fur traps?

By Elizabeth McSheffrey | News | January 15th 2016
#4 of 467 articles from the Special Report: State Of The Animal 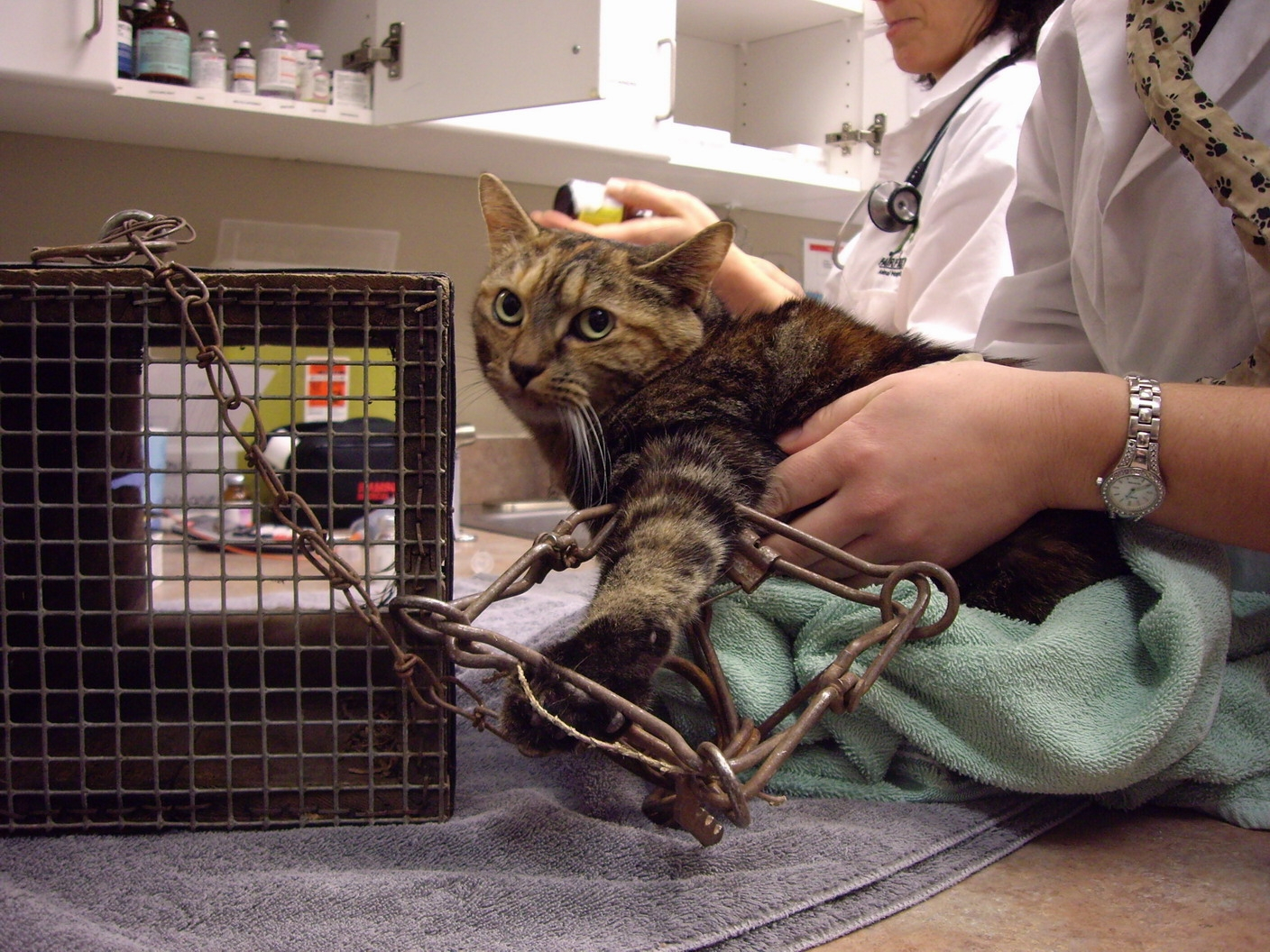 A pet cat caught in a Conibear trap in Kelowna, B.C. in 2012. Photo courtesy of the Association for the Protection of Fur-Bearing Animals.
Previous story
Next story

On Sunday, a B.C. couple's white sheepdog, Gracie, nearly died — tongue punctured, missing teeth, and bleeding from the mouth — when she was snapped up by a baited trap hiding beneath the snow of a popular hiking trail in the province's Southern Interior.

Last month, a P.E.I woman's pooch, Caper, died writhing in a concealed snare on Boxing Day surrounded by freshly cut pig hooves in a forest near a set of provincial trails.

In November, Amanda McNeil of Newfoundland found her dog Scruffy "screeching in pain" as he fought to get out of a leg-hold trap set on a popular nature trail with benches and lookouts. It was probably set for otters, beavers, and muskrat, but nobody knows for sure.

According to the Fur Institute of Canada, there are approximately 50,000 trappers throughout the country, whose pelts generated nearly $15 million between 2009 and 2010 (the last year statistics Canada kept records). Legislated traps are designed to minimize the risk of catching anything but their intended prey, yet the number of domestic pets caught in traps across Canada appears to be countless.

"Something is definitely wrong and the current regulations aren’t sufficient," said Lesley Fox, executive director of the Association for the Protection of Fur-Bearing Animals. "How many more animals have to die before changes are made?"

An example from British Columbia

Trapping in Canada is legislated provincially, and according to APFA, it's no mystery how household pets end up in wildlife traps, particularly in B.C. In the western province, the practice is controlled by the Ministry of Lands, Forests and Natural Resource Operations (FNLR), whose regulations apply to some 3,500 trappers targeting 17 wild species.

The use of both lethal and non-lethal traps is permitted, including leg-holds, foot snares, body-gripping traps, egg traps, and submarine traps. The most commonly trapped species throughout the country are muskrat and beaver.

"Here in B.C. it’s unique in the sense that it’s a really active province, there’s a lot of recreational opportunities, people are out and about, and a large percentage of our population has dogs," said Fox, whose organization counts more than 100,000 dog owners in Vancouver alone. "That just puts people and their companies more at risk."

According to provincial law, it is legal to set traps, hidden and baited with animal remains, inside provincial parks (with a permit), and within 200 metres of a dwelling, as long as the specified traps are used for land and water capture. These traps, boxes, and leg-holds do not need be marked, flagged, or identified in any way to notify the public of their existence.

"They put not only fur-bearing animals in harm’s way, but they also have the potential to injure and kill our own companion animals including other animals and endangered species," Fox insisted.

The Association for the Protection of Fur-Bearing Animals has been lobbying FNLR to change the rules since 2011, but has yet to gain audience with the ministry. While the organization would prefer to ban trapping outright, Fox said it would settle for a number of preventative measures, at least for now:

“Even something as simple as warning signs... also identification tags. Right now, traps are unmarked, so if your dog were to get caught in a trap there’s no recourse, because you have no idea who set that trap."

According to a briefing note obtained by APFA under the Freedom of Information and Protection of Privacy Act (FIPPA), the ministry is aware that "since 2003 there have been over 85 reports of pets being caught in traps (approximately 8 pets per year)," and acknowledged that the number may be even higher given that the briefing note is dated from 2013.

At least four B.C. municipalities, including Nanaimo, Sechelt, Vernon, and Surrey, have petitioned to change the legislation through by-laws or letters. Their efforts have been unsuccessful however, as an anti-trapping by-law requires the approval of the ministry. In a statement to National Observer, FNLR said this policy is under review, and highlighted updates to wildlife regulation in spring of 2015 that restrict the size of Conibear traps that can be used throughout the province:

"The new regulation will reduce the potential for non-targeted species (ie – pets) to be harmed by land-set traps set for fur-bearers or nuisance animals within municipal boundaries," said the email.

It also added that in the case of Gracie, the sheepdog caught in the Southern Interior on a hiking trail, there were signs along the trail access road indicating that active trapping took place in the area.

Fox said the changes "still aren't good enough," as pets continue to be caught in traps despite the change in trap size.

** Editor's note: This piece has been updated from its original version based on a revised statement from the ministry, which originally told National Observer that municipalities could create their own wildlife bylaws freely.