Carbon-buster takes energy future into his own hands 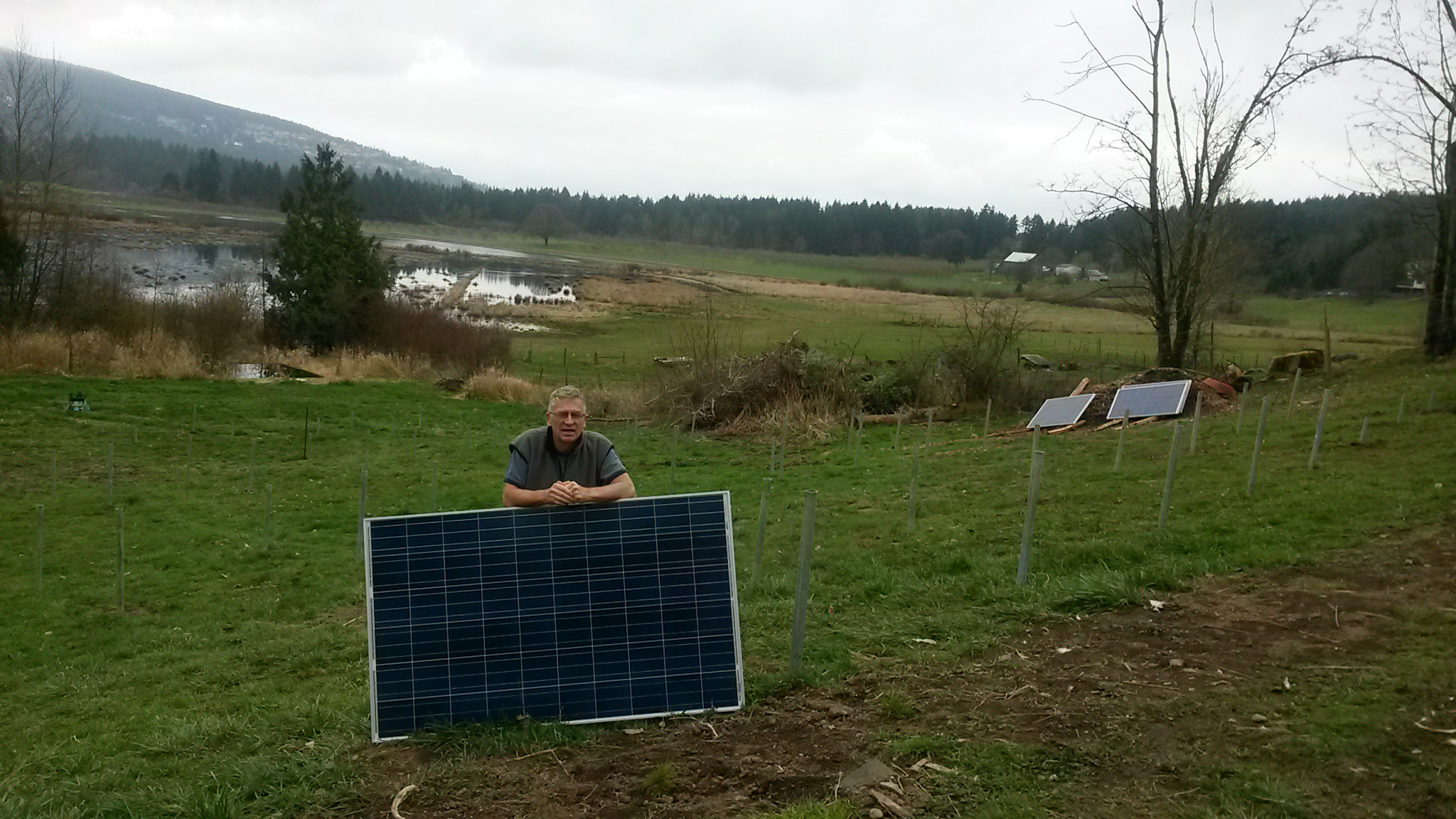 Photons of energy stream down from the sun to create those strawberries, using the process of photosynthesis. This fantastic evolutionary leap allowed agriculture to jump-start our prosperous society, with cheap energy from fossil fuels needed to power our machines.

But energy from fossil fuels turns out to be the biggest Catch 22 in history. Because, while these fuels created prosperity, they are destroying our climate. And the resulting catastrophic storms will eventually destroy our society. So yes, we have prospered; but yes, we planted the seeds of an unsustainable economy and lifestyle.

One big solution to minimize damage from climate change is to use the sun'’s energy for more than just growing food. More solar energy falls on earth in a single hour that all the fossil fuel energy used globally in a year. On June 9, 2014, Germany produced a record 50% of its electricity from solar and yet it gets less sunshine than does Cowichan.

You and I should use the sun's abundant photons to electrify our entire lives - electric cars for transport, electric heat pumps for homes, and electric machines for industry. I live on Vancouver Island and in my region of Cowichan, citizens will spend over one billion dollars on energy over the next decade - that means exporting a lot of jobs. But if we go solar, we will create more local jobs than any other energy source.

I encourage you to take the next big step towards sustainability. Consider using your backyard or roof-top garden to transfer the sun’s energy into renewable electricity using a proven and inexpensive technology - solar panels. Then, importantly, use that extra electricity to replace your use of fossil fuels. Unlike my strawberries, there is a side benefit:– B.C. Hydro’'s net metering system allows you to sell off any excess electricity and make a profit. Not convinced yet?

Well, B.C. has considerable hydro-electric power; but generally hydro has a higher carbon footprint than solar, and higher distribution costs. In any case, we will need lots more renewable power to transform into a zero-carbon economy; preferably using citizen-owned, cheap and local energy. Right now, you and I can make solar energy cheaper than can the Site C dam project, if and when it comes onstream.

Solar energy is compatible with B.C. Hydro's electrical grid system, and will be needed as glacial waters and reservoirs run dry due to climate change. Solar may even replace existing imports of energy from coal-burning power stations (10 per cent of BC's electricity comes from Albertan coal).

However, many people cannot make solar electricity on their own. Perhaps they have no suitable rooftop or backyard, or lack money to make that initial investment. So what to do?

We are forming a group called Solar Cowichan to help people invest in solar energy. The concept is simple; form a social enterprise group, perhaps a co-op, that allows members to invest as much as they can afford in solar panels on residential or commercial sites. This group will install solar panels installed on suitable property, collect money earned from the sale of electricity, and redistribute it to shareholders.

To test the economics of this concept, and frankly to put my money where my mouth is, I utilized a bit of my garden as well as a slope on it’s south side to install 192 solar panels. It took up about 35 x 25 metres or about 1/10 of a hectare. But it will produce about 50,000 kWh of energy per year which is three to five times the amount most homes consume.

I contracted this project to a local company, Viridian Energy Co-op, as a personal investment - transferring about $145,000 from my pension fund. The energy produced will give me a saving on my home's electric bill of about $2,000 per year as I will no longer pay B.C. Hydro's Tier-2 rate of about 12.4 cents per kWh. Hydro will also pay about $3,500/ per year for my excess electricity at 9.9 cents per kWh.

So electricity flows from my solar panels into my home (my Tier-2 savings), or into Hydro's grid and their cheque flows back to me by mail (my cash revenue) - hey, it's a lot easier than selling strawberries.

Combining this saving and revenue gets me to $5,500 and because I save dollars already taxed, I project about a 4 per cent return in the first year, a rate that will rise over time as B.C. Hydro rates increase.

It's a good deal considering the increasingly poor and volatile returns that my pension fund earned in the stock market this year, and better than investing in low interest Guaranteed Investment Certificates or bonds. And it may get even better since a similar project on Salt Spring Island produced 10 per cent more energy than anticipated. As well, I have a 25 year warranty again, nobody gets that growing strawberries.

So step up and invest in solar energy to provide the non-carbon renewable energy needed to replace fossil fuels, which all world governments agree must be done. Your positive action on climate change will visibly demonstrate to any hesitant politician, or citizen that you support a non-carbon future.

It's a no brainer. We put 4.2 kilowatts on our roof in 2009, another 5.5 at one third the cost during the Notley rebates for microgeneration....and if it weren't for the bogus 'administrative charges' we pay, we'd be paying 0 and collecting money during the summer. A modest feed in tariff such as they have in Germany, would make this investment even more attractive than many of the stock market gambles now on offer.

Everyone should do it.....it pays for itself, and is actually more satisfying than the two weeks in the Bahamas you might have to forego for a year or two to make it happen.

Climate change is coming fast; doing nothing now is not an option. We need everyone on board.