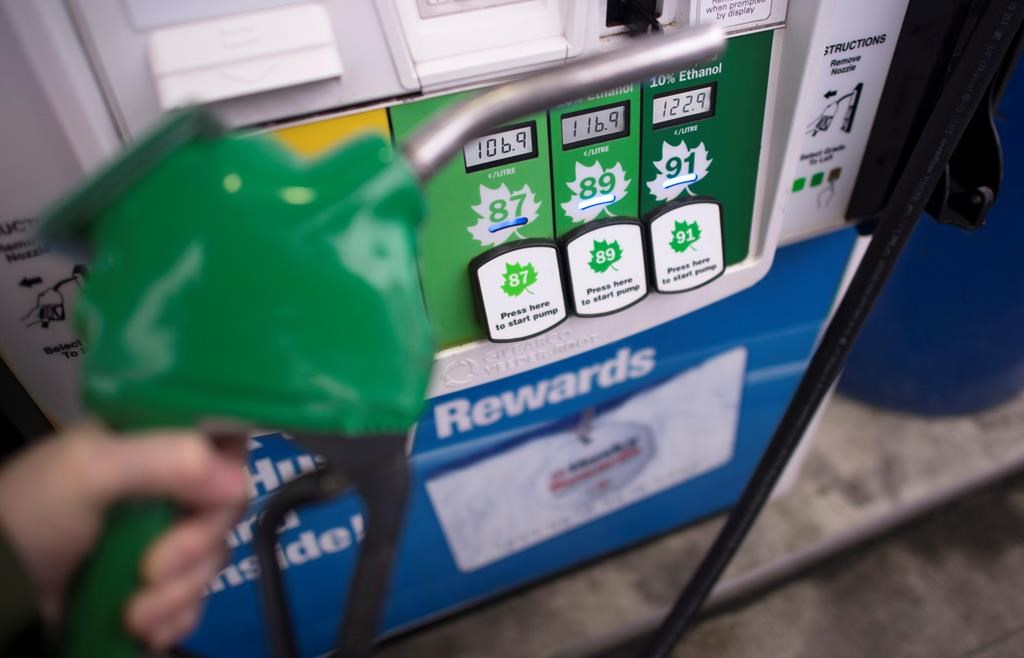 In its latest monetary policy report this week, the Bank of Canada pointed out that oil prices have dropped about 75 per cent from their peak in June 2014 but that gasoline prices have not fallen "as much as the reduction in crude oil prices would suggest, based on historical experience.''

"We're being taken to the cleaners considering how low a barrel of oil costs these days," said Alan Mauch in Vancouver, where gas is still averaging over a dollar a litre even as it hovers below 70 cents in parts of Alberta, as he filled his tank this week.

"I think the oil companies are taking advantage of what we're used to as far as pricing is concerned and they're going to milk it for as long as they can."

But analysts say it's not quite so simple: the disconnect between low crude prices and what people pay at the pump is being caused by the low Canadian dollar, higher margins at refiners and increased taxes.

"The biggest factor right now is exchange rates; it makes a huge difference in the product prices we pay," said Jason Parent, vice president of consulting at the Kent Group which provides data to the petroleum sector.

He said gasoline prices in Canada need to be hiked to be competitive with U.S. markets to compensate for the low loonie, which has been bobbing above and below 70 cents in recent days.

Dan McTeague, a gas analyst at Gasbuddy.com, says drivers would be paying far less per litre if the Canadian dollar was at par.

"The weakness in the loonie accounts for over 12 cents a litre in lost purchasing power for motorists," said McTeague.

And while prices haven't dropped as much as drivers would like, they're still taking advantage of cheaper gas and driving more. That has led to more demand for gasoline and, in turn, allowed refiners to charge more.

"Refineries have increased their margins," said McTeague. "Wholesalers are making a significantly greater amount of money than they were in the past."

Margins and costs vary widely across Canada and are vulnerable to regional bottlenecks. The prairies were hit with a price spike last summer when a major Midwest refinery went offline in the U.S., while Vancouver has recently been hit with higher prices because of refinery issues on the West Coast.

"Refined products are very separate commodities from crude oil; they each have their own kind of supply-and-demand fundamentals," said Parent.

Refinery margins were about 16 cents a litre in Toronto in January 2015, but by the end of the year they were at almost 26 cents a litre. In Vancouver, margins increased from 23 cents to 38 cents over the year, while all regions saw significantly higher peaks in the summer driving season.

The other factor keeping gas prices from following crude is increased taxes, both through green initiatives and straight revenue-boosting.

"Taxes play a much greater role than what we would normally assume," said McTeague. "They have increased pretty much right across the country since 2008, and dramatically so."

Vancouver drivers pay about 48 cents a litre in taxes, which is about 10 cents higher than early 2009 thanks in part to the 6.7-cent-per-litre carbon tax. Montreal drivers pay about the same tax and have seen a similar increase.

Toronto drivers aren't burdened with the city taxes charged in Vancouver and Montreal, but have still seen taxes go up about 8.5 cents a litre since 2009 to average 37 cents a litre, which includes a 10 cent federal tax, a 14.7 cent provincial tax, plus the HST.

Note to readers: This is a corrected story. A previous version had incorrect figures for gasoline and oil prices.