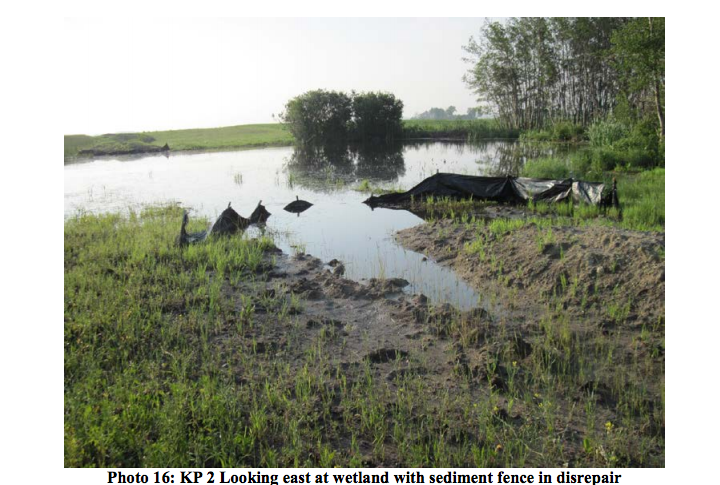 Enbridge Inc. will save $24,000 after convincing Canada's pipeline enforcement agency that it shouldn't have been punished for failing to help neighbouring landowners with property damage.

The savings will come after the National Energy Board agreed to water down a $100,000 penalty for significant damage that Alberta-based Enbridge, Canada's largest pipeline company, caused to farmland property in southwestern Manitoba during replacement work on its Line 3 pipeline in 2014.

In a newly-released decision posted on its website, the National Energy Board confirmed that it was reducing the $100,000 fine - related to the damage caused by Enbridge — to $76,000, agreeing that the rules used to impose the fine only require pipeline operators to provide "reasonable assistance" to the regulator and not the private landowners. The decision said that Enbridge only agreed to assist the landowners in 2014 when an NEB inspector told them to help.

The NEB also announced it was rescinding a separate $100,000 fine against Enbridge, withdrawing allegations of a worker safety violation.

Enbridge did not respond to requests for comment about its efforts to challenge the fines, while the NEB referred National Observer to its decision.

The company has previously admitted it didn't live up to its own expectations or those of landowners and deserved to be criticized for the problems caused in 2014 during the botched work in Cromer, Manitoba.

But an organization that defends landowner rights is blaming the NEB for causing the problem in the first place when it gave Enbridge a “right-of-entry” on private property, instead of requiring the company to negotiate a contract with landowners for access needed to refurbish the Line 3 pipeline that runs from Hardisty, Alberta to Superior, Wisconsin.

“The NEB went ahead and gave right-of-entry anyway, which compromised the landowners’ rights to negotiate a contract that would have protected them,” said Dave Core, president of the Canadian Association of Energy and Pipeline Landowners Associations (CAEPLA), in an interview.

The NEB had issued an order that forced Enbridge to stop its pipeline replacement work for a few weeks in the summer of 2014, following numerous complaints from landowners in Cromer about property and environmental damage.

“Basically, what Enbridge is saying to the NEB is we’re answerable to you and it’s because of NEB regulations,” Core said. “They’re not answerable to landowners. The NEB actually compromises landowner rights. It compromises the environment and safety, because those are the issues that we negotiate if we were able to negotiate with pipeline companies.”

The regulator’s decision to reduce the fine was based on a review that confirmed Enbridge had violated the National Energy Board Act, and failed to honour 15 separate commitments made as part of an environmental protection plan for the replacement work.

“The Board is of the view that Enbridge’s failure to implement mitigation measures, in particular those relating to soil handling, erosion and sediment control and drainage control, resulted in increased risk of harm to the environment,” said a Feb. 5, 2016 letter, signed by NEB chair Peter Watson and two other NEB members who conducted the review of the fine. “The Board finds that at the time of the July (2014) inspection, risk to the (environment) had materialized and environmental damage had occurred, including significant erosion and admixing of topsoil and subsoil… substantial amounts of sedimentation in various wetlands and migration of soils on and off of the Project RoW (right-of-way).”

Enbridge had requested the review for the fines after the NEB first proposed them in February 2015.

Watson’s newly-released letter said Enbridge told the regulator that the rules only require it to provide “reasonable assistance to the Board, and not to the landowner.”

“The NEB inspector went out in February (2014) and approved what was going on,” Core said. “And it was only when landowners stood up and worked with CAEPLA that we got the NEB out and proved to them that what was happening was devastating to the land and the environment and were able to get a stop work order.”

The latest decision was released with the NEB now in the final stages of reviewing Enbridge’s proposal to complete the replacement work - a $7.5 billion project that would be the largest in company history - doubling the pipeline’s capacity to about 760,000 barrels of oil per day.

But Core said the damage in Cromer has prompted the company to reach agreements with hundreds of local landowners on the route. He said he believes this will improve monitoring and environmental protection, without any help from the NEB.

Editor's note: This story has been corrected to reflect that the fine for environmental damage was reduced from $100,000 to $76,000. The original version of story, incorrectly stated that this fine was reduced to $78,000.