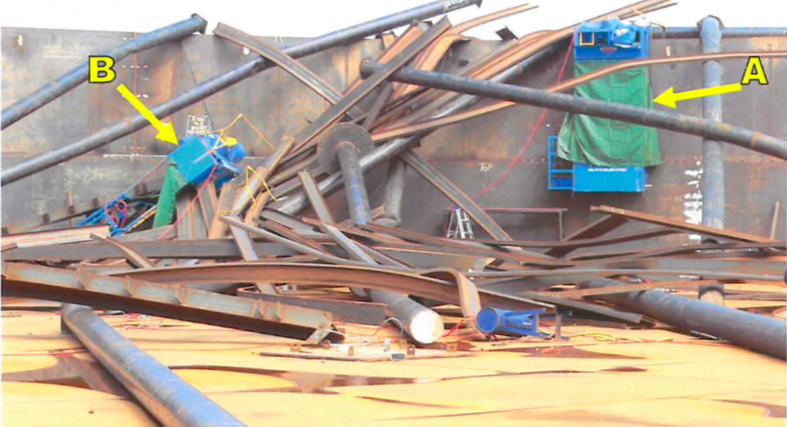 The engineering permit of oilsands giant Canadian Natural Resources Limited is under the microscope, following new revelations emerging about a fatal construction disaster from 2007 in northern Alberta.

The province’s professional engineering association said on Wednesday that it will decide by next week whether to launch its own investigation into the new revelations, released on Monday by the Alberta government. The association licenses and regulates individuals and companies that practice engineering, and it can discipline members or revoke licenses of those that break the rules or fail to protect public safety.

"Our hope is that by early next week, we will make a formal decision about what our next steps are going to be and it could include a formal investigation (into CNRL), or it may not," said Philip Mulder, a spokesman for the Association of Professional Engineers and Geoscientists of Alberta.

Two foreign workers from China were killed and two others were seriously injured among 13 employees trapped inside a tank that collapsed at the CNRL Horizon oilsands site on April 24, 2007 about 70 kilometres north of Fort McMurray.

An investigation report released this week by the provincial labour department concluded that the disaster was related to poor designs that were not verified by a professional engineer and which failed to meet provincial building code standards.

It also concluded that CNRL had failed in its due diligence.

“CNRL did not do what was reasonable and practicable to ensure the (provincial Occupational Health and Safety) Act and the regulations were complied with by failing to ensure that one of their contractors had erection drawings and procedures for a skeleton structure certified by a professional engineer,” said the investigation report, originally completed in September 2007, but only posted online by the Alberta government on Monday.

“One of the fatally injured workers, an electrical consultant, had been on the top of a welding machine working on the east side of the tank wall,” said the report. “The electrical consultant had been struck in the head and back by a section of the falling steel and thrown onto scaffolding outside the east wall of the tank. The other fatally injured worker, a scaffolder had been standing on the tank floor, east of the tank centre and had been caught and crushed under a falling girder. Rescuers had manually lifted the girder to rescue him. The scaffolder died during transport to hospital.”

CNRL had a permit to practice engineering in the province at the time of the disaster and it continues to have a permit through the Association.

“We didn't have access to that (health and safety) report until basically on Tuesday, so we’ve certainly been having a look at it,” said Mulder, from the association. “We’re still reviewing the report, internally. We’re also, in considering our next steps, seeking some legal advice - because of the amount of time that has passed between the incident and the investigation and (the release of the report)."

When asked about the status of its permit and whether it could be affected by the report, CNRL said it had "no information to provide" and it declined to comment.

All 29 charges related to the case against CNRL were stayed, the CBC reported earlier this week. Charges against a Chinese contractor, Sinopec Shanghai Engineering Ltd. were withdrawn, while a third Chinese contractor, SSEC Canada, pleaded guilty for failing to protect a worker’s health and safety and paid $200,000 in fines, the CBC also reported. The third contractor also contributed $1.3 million to the Alberta Law Foundation, the broadcaster said in its report.

SSEC Canada had recruited 132 Mandarin-speaking workers from a Chinese construction company to work on the CNRL project, the provincial investigation report said.

Meantime, APEGA noted that the health and safety report, supposedly completed eight years ago, was only released in recent days.

“We would have appreciated having an opportunity, sooner than that, to have received the information,” said Mulder.

When asked whether APEGA had previously contacted the health and safety board to obtain the report, Mulder said he believed that there was a request, but he didn't have further details.

He added that APEGA did not initially investigate the incident because it felt, at the time of the disaster, that it didn't have jurisdiction to investigate, since the matter was already under review by a provincial occupational health and safety group.

“The way that APEGA did business then is different than the way we do business now,” said Mulder. “The understanding at that time was that we didn't have jurisdiction. We subsequently have come to the understanding that we think we do, but that’s transpired over that period of nine years or so.”

The CBC reported that the documents were only released after it had pursued a lengthy court battle. The documents obtained by the broadcaster also revealed that CNRL had opposed efforts to hold a full public inquiry on the disaster.

“The normal procedure is to post these kinds of documents once the court proceedings are completed and in this case, it was merely an oversight that it wasn't posted sooner,” said a provincial labour department spokeswoman in an email.

Balenciaga Hoog
Picking jewelry can often turn out to be an incredibly monotonous procedure. Though which may make you shed some your persistence, make certain that it does not let you be hasty and then make some alternatives that you just should come to regret at a later time.Beads And Baubles: Beneficial Suggestions For Jewellery Attention

If you have been on contra --depressant medicine for a few several weeks, and discover that it is no longer working, you might want to speak to your physician about boosting the dosage, or shifting to another medication. Certain people have more severe situations of depressive disorders, and for that reason, they might require an increased medication dosage of treatment than the others. However, it may well be the way it is that it's not medication, but counselling and assistance that you require.