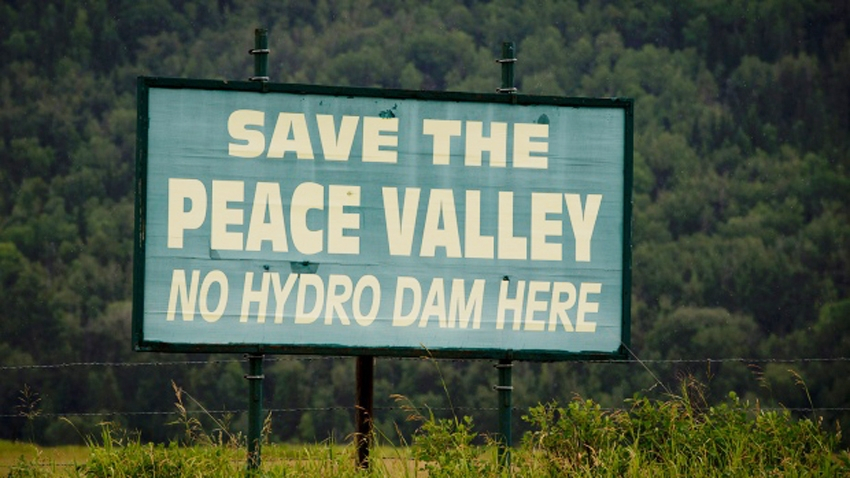 Protesters have no legal right to block construction of the Site C dam and their actions could cost BC Hydro $8 million, a lawyer for the utility argued Monday.

The provincial Crown corporation has asked the British Columbia Supreme Court for an injunction to remove First Nations members and Peace Valley landowners from a protest camp near Fort St. John.

"BC Hydro has the legal authority to do what it is doing, and the defendants have no legal right to obstruct it," Mark Andrews told a judge.

Demonstrators set up camp on the south bank of the Peace River in November 2015 and have been blocking crews from undertaking clearing work, even building campfires near tree-felling and excavation operations, BC Hydro lawyers told the court.

Andrews said protesters are blocking an area where waste rock was to be deposited, forcing crews to transport the rock elsewhere at a cost of about $8 million. If the alternative site doesn't work, there's a small risk the project will be delayed by a year at a cost of $420 million, he said.

Clearing needs to be underway by no later than the beginning of March to avoid impinging on bird-nesting months, when it becomes impractical to clear, he added.

BC Hydro recognizes that opponents have a right to protest, but there are many places they can demonstrate without stopping legally permitted work, Andrews said.

The hearing for the injunction application is expected to continue through Wednesday. Lawyers for the eight defendants have not yet had the opportunity to respond.

Yvonne Tupper of the Saulteau First Nations is one of the defendants and she drove 14 hours to attend the hearing. She said BC Hydro did not obtain consent of the Treaty 8 Tribal Association and the dam appears to violate its treaty rights.

"I would not be alive today if that area was not present," she said outside court. "That's a historical path that ... my grandmother travelled to meet her first husband across the Peace River."

Tupper said the number of demonstrators at the camp fluctuates between about seven and more than 30. The campfire is meant to keep both protesters and workers warm, as at one point it was -25C with wind chill, she said.

At a news conference before the hearing, Suzuki voiced support for the protesters. He said Canada committed to a "very serious" target at last year's climate conference in Paris.

"By committing to that target, everything that we do changes," he said. "It seems to me crazy to put farmland in the north underwater when that valley can be the breadbasket of the north. Food has got to be grown much closer to where it's going to be consumed."

West Moberly and Prophet River First Nations said Monday that a United Nations committee was meeting in Geneva and would ask Canadian diplomats about consent of indigenous peoples regarding resource projects, including Site C.

Also on Monday, hundreds lined up in Prince George for the opportunity to hand in their resumes at a job fair for the project. BC Hydro said 600 workers will be needed by this spring, with 1,500 set to work on Site C at its peak.

The court action is not the first between BC Hydro and Site C protesters. Several First Nations and local residents have filed legal challenges over the dam.