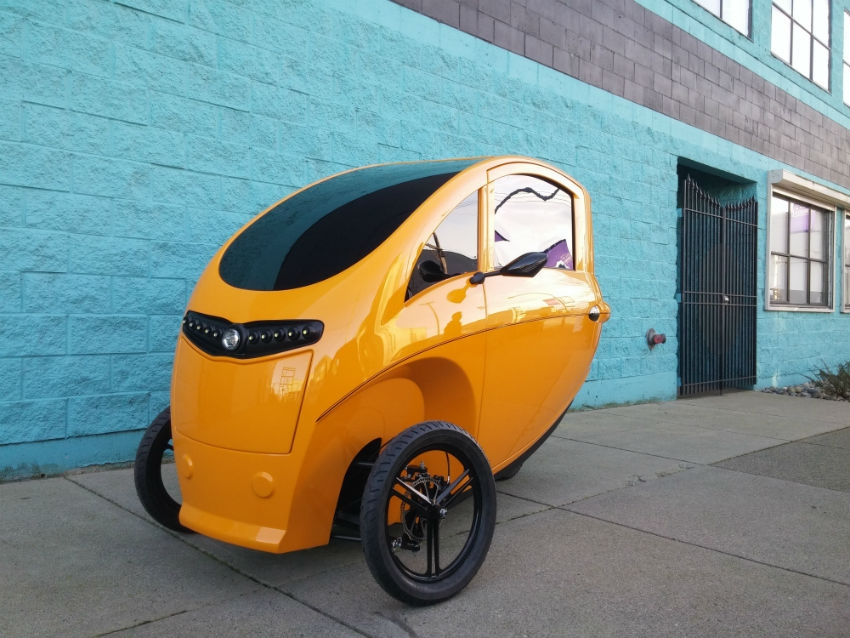 The Veemo is a new, three-wheeled enclosed bicycle with an electric-assist motor that has made waves at the annual BC Tech Summit in January 2016. Photo courtesy of VeloMetro.
Previous story
Next story

A Vancouver cleantech startup has developed a quirky new single-person electric-assist pedal vehicle that could, by next year, be quietly zooming along the city’s streets and bike lanes—and eventually, those of other cities like it around the world.

In the simplest terms, the Veemo is a three-wheeled enclosed bicycle sporting an electric-assist motor. Starting this fall, students at the University of British Columbia will be able to swipe their smartphones to rent one for short jaunts across the four-square-kilometer campus.

And if all goes according to plans, Veemos will be rolling along the streets and bike lanes of Vancouver in 2017. Think of it like a carshare without the car, if you will.

And unlike a bikeshare program, thanks to the enclosed composite-material shell, no helmet will be required.

The shiny little vehicle is an old idea reborn; it’s complete rethink of a velomobile—a simple enclosed recumbent bicycle concept that has been around for decades, but has never come anywhere close to the mainstream.

That’s about to change, if John Stonier has any say in it.

“Our whole goal has been to take the velomobile—a nice product that is quite impractical—and redesign it to make it make it great for everyone to use.”

The Veemo is all-but effortless to pedal, as the electric assist motor kicks in right away—Stonier calls it “active transportation without perspiration.” For this reason, plus the fact that no helmet will be required, it will likely appeal to business people who want to get across town without sweating in their suits or messing their hair.

“Other cycles with multi-wheel stability have already received an exemption in the B.C. regulations,” says Stonier, of the helmet issue. “We are seeking an exemption on the same basis of stability. Falling off your bike is the main source of injury.

“You won’t fall off a three wheeled vehicle if you lose your balance or have to stop quickly to avoid a dog crossing your path.”

The Veemo goes for a test drive in Vancouver. Photo courtesy of VeloMetro.

Stonier estimates that rentals will cost roughly 30 per cent less than existing vehicle options. You won’t need a driver's license to rent a Veemo, just a credit card and a smart phone, so it will be an option for a wider segment of the population.

The vehicle also turns on a tight radius and fits into tight spaces, Vancouver Observer found in a recent test ride of the vehicle’s alpha-version predecessor.

So far, Stonier has three Veemo production prototypes, and one will be on display next week at the GLOBE Innovation Expo in Vancouver. Stonier is in financing mode, he is looking for investors to scale up the company.

“We are still looking for financing for our next phase where we can produce up to 10 vehicles, and for beta fleet testing.” The company has partnered with the Vancouver Economic Commission in its Green & Digital Demonstration Program.

Stonier has shared the technology with the City of Vancouver and received tremendous positive attention when he debuted the Veemo at the recent BC Tech Summit 2016.

“People really are loving what we are doing,” said Stonier. “Cities really like this, because we are achieving modal shift, this is going to get people out of cars and into a healthy livable city alternative.”

“Bicycles and scooters are one thing, but are not a replacement for cars, they are a great option in fair weather, but when you have a day when it is pouring out, fewer people want to use them,” he adds.

VeloMetro is starting its limited trial run at the University of British Columbia later this summer. Pending financing, Stonier says the tech could greet the new students coming in September with a new service.

That would be a small scale rollout, and grow out the business in 2017.

Editor's note of disclosure: GLOBE Series, the company that produces the GLOBE Innovation Expo in Vancouver, is a client of the author.