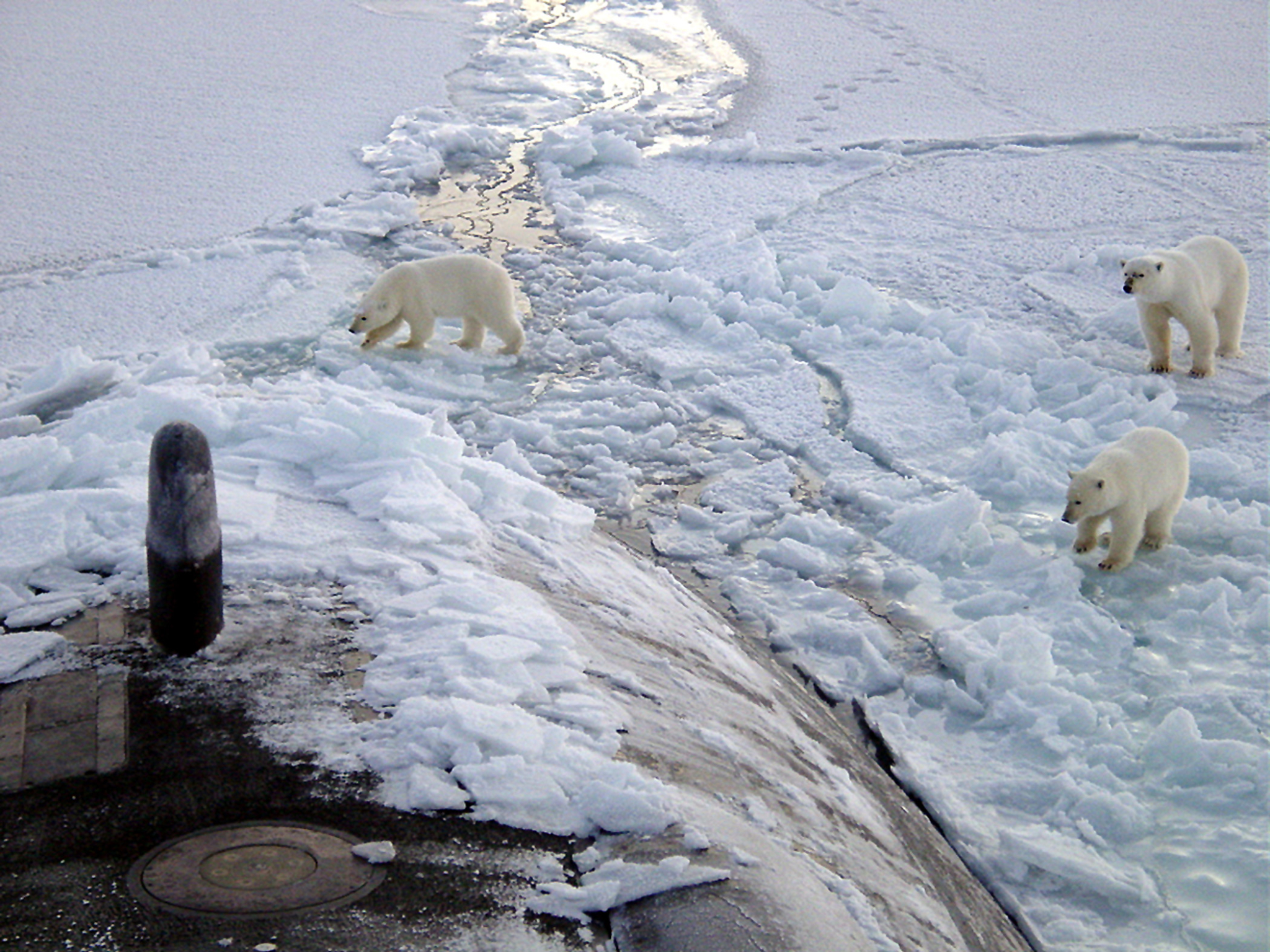 The Liberal government is pursuing a review of Canada's Arctic drilling law initiated by Conservatives and big oil companies.
Previous story
Next story

The Liberal government says it is proceeding, behind closed doors, with a review of Canada’s Arctic drilling law that could see it relinquish up to $500 million to major oil companies that want to use the money to pursue risky exploration projects.

Internal federal briefing notes show that oil industry lobbyists initiated the review with the former Conservative government in order to change the law, the Canada Petroleum Resources Act, so that they can extend their existing licenses to drill for oil in the Arctic.

Under the existing law, four major oil companies had collectively paid about $500 million in security deposits to obtain their licenses, which expire within five years. But with time running out, they would forfeit most of that money to Canadian taxpayers if the law isn't changed.

Environmentalists have criticized the entire initiative, arguing that any changes should be debated in a more public setting such as parliamentary hearings because of the dangerous implications of Arctic oil exploration.

“Just the way that the whole process was conceived — that it was a direct outcome of industry lobbying… raised a lot of concerns that the review was slanted from the beginning,” said Greenpeace Canada Arctic campaigner Alex Speers-Roesch.

The Canadian government estimates that there could be about 1.36 billion barrels of oil buried beneath the Beaufort Sea in the Arctic Ocean.

But companies such as Imperial Oil, Exxon Mobil Corp., BP Plc., and Chevron Corp. would be forced in the coming years to walk away from their proposed projects since they have not been able to convince federal authorities that they can drill for oil in the Arctic — before their licenses expire — without causing an environmental disaster.

The changes to the law proposed by the oil industry lobbyists would allow them to extend exploration licenses beyond a maximum nine-year term so that they can pursue their projects without paying any new security deposits. At the same time, an extension of the licenses could allow companies to get refunds on the hundreds of millions of dollars that they already paid to the government, once they begin to drill for oil.

Arctic oil exploration has slowed down in the wake of a plunge in global commodity prices. The industry also struggled to meet new safety conditions imposed by authorities following BP’s 2010 offshore drilling disaster in the Gulf of Mexico.

In Canada, those safety conditions would require the companies to prove that they can rapidly kill an out-of-control oil well within the same season after a blowout occurs. This would mean drilling what is known as a same-season relief well to prevent the type of damage done by BP's blowout in 2010.

The companies have proposed alternative safety measures to drilling a relief well, but were unable to demonstrate their plans were safe. As a result, they've put exploration projects on hold and asked for more time to come up with a solution.

Drilling for oil in the Arctic

After Imperial Oil asked the government to change to the law, the former Conservative cabinet minister responsible for the legislation, Bernard Valcourt, approved a contract last summer to a veteran Alberta-based energy lawyer, Rowland Harrison, to begin a "comprehensive" review.

Valcourt's selection of Harrison went against the advice from bureaucrats who warned the minister in a memo that it was “inappropriate” to proceed without allowing a range of candidates to compete for the nomination, as required by federal rules for contracts worth more than $25,000.

But when this memo surfaced during the last election campaign, the department backtracked on its warning, releasing a statement that said its earlier advice was based on a “misunderstanding” about the nature of Harrison's review.

The contract, estimated to be worth about $134,660 for several months of work, was suspended during the election campaign, but the new government later allowed the lawyer to proceed with his review. Harrison, who also served in the past as a member of the National Energy Board, has been meeting with Indigenous groups, industry representatives and environmentalists. He is scheduled to deliver his recommendations to the government by May 31.

The Liberal government declined to explain why it agreed to proceed with Harrison’s contract.

”Indigenous and Northern Affairs Minister Carolyn Bennett has confirmed Rowland Harrison to continue the comprehensive review of the operations of the Canada Petroleum Resources Act (CPRA),” said the Indigenous and Northern Affairs Department in a statement. “As (Harrison’s) work is ongoing, it would be premature at this point to speculate on steps to be taken at the conclusion of the review.”

Greenpeace Canada said the changes proposed by Imperial Oil are equivalent to another fossil fuel subsidy which the Liberals had promised to phase out in the last election campaign. The environmental group also said changes to facilitate Arctic drilling for oil are incompatible with the government’s climate change targets, which require most fossil fuels to remain in the ground to prevent dangerous levels of global warming.

Imperial Oil — leading a joint Arctic exploration venture that includes ExxonMobil and BP — as well as Chevron, which has separate licenses, have been asking the government to change the law since 2014 when it became clear that they would not be able to proceed with exploratory drilling within their existing license terms, said internal government briefing notes. ExxonMobil is the majority shareholder of Imperial Oil.

Imperial Oil and Chevron both declined to answer questions about their discussions with the government.

“As a matter of long-standing policy, we do not discuss specific communications with government officials,” Chevron Canada spokesman Leif Sollid said in an email.

Chevron said it had no additional information about its existing licenses after suspending its exploration program in December 2014.

But internal federal correspondence reveals some details about how Imperial Oil – known for operating Esso gas stations in Canada – was actively lobbying Conservatives behind the scenes to get the review.

“Per our conversation today, Imperial CEO Rich Kruger is requesting a phone call with Minister Valcourt either this week or next to provide an update on our Beaufort Sea Exploration Joint Venture… Happy to discuss potential availabilities at your convenience,” wrote Imperial Oil lobbyist James Kusie in a March 23, 2015 email to a policy advisor in former minister Valcourt’s office.

Valcourt would later meet with Imperial Oil during a visit to Calgary in June, a few weeks before he announced the review led by Harrison. A senior non-partisan bureaucrat wrote in an email at that time that he didn't know what was discussed in the meeting with Imperial, since the minister and his chief of staff met with the company privately.

The former government and Imperial Oil declined to reveal details of the conversations involving Valcourt. But the department of Indigenous and northern affairs said in a briefing note, after the Liberal government was elected, that its bureaucrats had never discussed or negotiated any potential license extensions with the company, since it would not be allowed to do so without changing the law.

The briefing note, obtained by Greenpeace Canada, also said Imperial Oil, in seeking to protect its licenses, had given incorrect information to government regulators such as the National Energy Board, when it suggested that it was negotiating extensions.

“In June 2015, Imperial wrote to all regulators informing them that the (exploration) program would be deferred, alleging that under the existing nine-year term of the Exploration License there was insufficient time for it to undertake the necessary work to prepare an application,” said the document, prepared for a Nov. 16, 2015 meeting between department officials and Imperial Oil.

“In the letter, Imperial suggested that it, on behalf of the joint venture partners (Imperial, Exxon Mobil, and BP), was in discussions with the federal government to have the terms of the exploration licenses extended to 16 years. These discussions are not taking place.”

That November meeting between the department, Imperial Oil vice president of public and government affairs Tom Huffaker and company adviser Jessica Dillabough, was requested by “senior representatives” of the company, the briefing note said.

Imperial Oil did not respond to a question asking whether it had any secret discussions with Valcourt to obtain license extensions.

Environmentalists who have reviewed the paper trail say they have been skeptical about the review ever since it was announced. Apart from concerns about whether the company gave incorrect information to the government, they noted that other federal documents, which describe Harrison’s mandate, suggest that he was hired for political reasons to help promote the changes proposed by industry.

These documents, also released through access to information legislation, said Harrison’s core roles would include intervening “when political issues arise,” delivering news to stakeholders and acting as a spokesman for the minister or department.

“Now, (the review) is being continued under a different government, and it’s possible that this minister has a different objective of the review than (former Conservative minister) Valcourt," said Speers-Roesch, from Greenpeace Canada. "So I guess you can’t be sure that the same attitude is there. Maybe they’re taking a different approach, but that remains to be seen.”

Since the Liberals were elected, Greenpeace and Imperial Oil have both lobbied Harrison and federal officials on the Arctic drilling issue. Representatives from Ecojustice, an environmental law organization, and the conservation group, World Wildlife Fund Canada also confirmed they met with Harrison, but say they continue to have concerns about the closed-door process.

Harrison declined an interview request, referring all questions to the department. But he recently warned industry to be prepared for change, co-authoring an editorial in Energy Regulator Quarterly that said the recent Alberta and federal elections would likely “have significant implications” for energy regulation and policy in Canada.


The former government overhauled several Canadian environmental laws in 2012 to facilitate more oil and gas development. Those changes prompted a public backlash and criticism from communities and Indigenous groups, who accused the Conservatives of putting public safety and a healthy environment in jeopardy by rigging reviews of new development projects in favour of industry.

The Liberals pledged in the last election campaign to review the changes made by the Conservatives and restore public trust in government oversight of industry.

After meeting with Harrison, who visited the Greenpeace office in Toronto on Feb. 11, Speers-Roesch was hopeful, saying that this type of meeting was a change from years of being shut out of access to federal officials under the previous government.

The environmental campaigner also said Harrison told Greenpeace that any potential changes to the law would likely be subject to public consultations after the lawyer submits his final recommendations to Minister Bennett.

“Ultimately, what will matter is what they do,” said Speers-Roesch. “But the attitude around the process has been quite positive in a lot ways in terms of welcoming our input and engagement. And Harrison seemed genuinely interested in listening to what I had to say and the concerns that we raised."