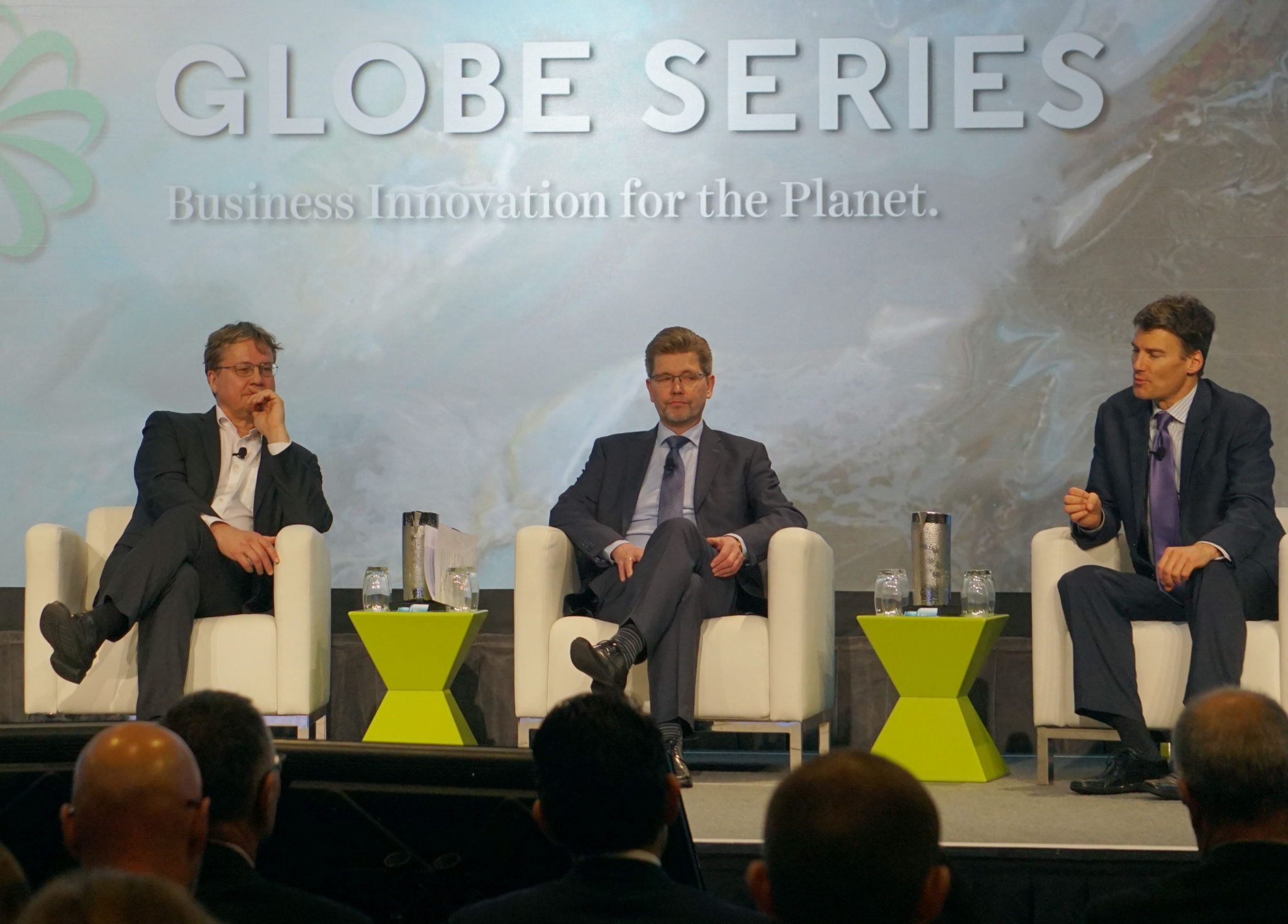 Vancouver Mayor Gregor Robertson plans on taking a leaf or two from the books of municipal leaders in Helsinki, Finland, and Copenhagen, Denmark when it comes to building a leaner, cleaner city.

Despite being part of a "friendly competition" to become the greenest city in the world, the mayor was happy to sit down with Deputy Mayor Pekka Sauri of Helsinki and Lord Mayor Frank Jensen of Copenhagen for a special roundtable discussion moderated by Margery Moore of Bloomberg BNA at the 2016 Globe Series in Vancouver on Friday.

The two European cities, both leaders in the global climate change discussion, have progressed leaps and bounds in the last decade with energy efficient infrastructure and transportation using innovative district cooling methods, upgrading old homes, and reducing reliance on personal vehicles. These are areas where Robertson feels Vancouver could improve, despite already being credited as one of the greenest cities in the world.

"Right now we’re about 31 per cent renewable," he told the roundtable audience. "Almost all our electricity is from renewable sources — the big challenges for us are with transportation and with the heat of our buildings."

Creating a culture of active transportation

Robertson is particularly interested in Copenhagen's renowned success with cycling as a form of public transit — 50 per cent of its residents commute by bike daily (even in the winter), and there are more bikes in the city than people.

Cycling has always been a part of Danish culture, explained its Lord Mayor Frank Jensen, but required a little revitalization after the rise of the middle class and vehicle affordability saw a sharp drop in bicycle use many years ago. Today, life on a bike in the Scandinavian city begins as early as three or four and quickly becomes part of the daily routine.

While Vancouver has more than 400 kilometres of cycling lane and their use is on the rise, Robertson said improving their safety would encourage more riders to get on the road. Part of the encouragement must also include a transition away from personal vehicle use — an area Helsinki has had some success in.

"There are more people in the younger generation who regard a private car as a nuisance," he explained. "More and more people are seeing the futility of this idea... it sits there in the driveway for 22 hours a day. This is obviously the way it should be."

Helsinki aspires to have carbon neutral transportation by 2020, while Copenhagen aspires to be a completely carbon neutral city by 2025. Vancouver wants to be the greenest city in the world by 2020, but if it wants to meet that goal it will need some help making its homes and public buildings more energy efficient.

The cost of electricity is so low in Vancouver that there is little incentive for homeowners, landlords, and builders to add energy efficiency measures or upgrades to their structures, said Robertson.

“We’re behind in that target," he explained. "We need fresh approaches to that and technology that will enable it. If there were a higher price on carbon that might make a difference because a lot of homes are heated by natural gas.”

Both Copenhagen and Helsinki have vibrant heating and cooling systems that don't use fossil fuels. In Copenhagen, 98 per cent of houses are linked to a super-efficient district heating system that captures waste heat from electricity production normally released into the sea, and channels it back through pipes into peoples' homes.

This has helped the city reduce its emissions by 50 per cent from 1995 levels, putting it well on its way to being carbon neutral by 2025. Helsinki too, has an award-winning district heating and cooling system with a 90 per cent efficiency rate based on an annual reduction of 40 per cent of overall carbon emissions.

"We need to be more aggressive on renewable energy," said Robertson. "That’s a piece we’re learning from European cities like Copenhagen, Helsinki — European cities that are further ahead of us.”

He didn't mention specifically if such a strategy could work for Vancouver, but said there will be plenty of other opportunities to "cross-pollinate" with the mayors and discuss these topics in the future. Sauri, Jensen and Robertson were all present at COP21 negotiations in Paris and will continue to collaborate in their friendly competition to snag the honour of being the greenest city in the world.