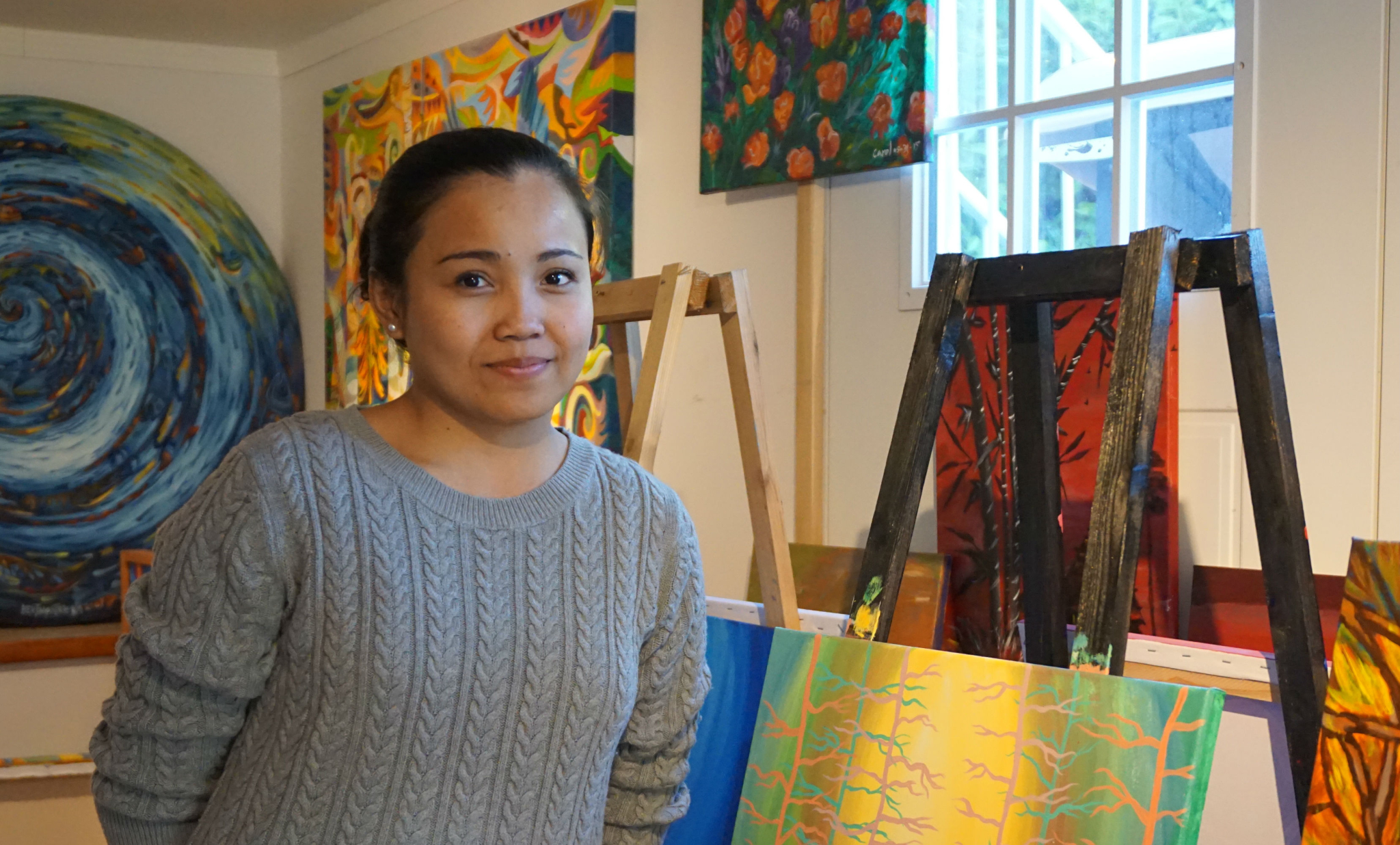 Live-in caregiver Hessed Torres was fired for refusing to tolerate abuse at work and paints as a form of "therapy" while she waits for a new work permit in Vancouver, B.C. Photo by Elizabeth McSheffrey.
Previous story
Next story

Hessed Torres’ eyes welled up with tears as she recounted her first two years in Canada. In 2014, she moved to Vancouver from the Philippines as a live-in caregiver, and in 2015, she was fired for refusing to tolerate abuse on the job.

“I had heard horror stories from Hong Kong and the Middle East, but never from Canada,” she told National Observer. “I didn’t know I would end up jobless here, because I really looked up to Canada as being one of the most accepting, welcoming and friendly countries.”

Tears rolling down her cheeks, she wouldn’t describe her abuse in detail. Today, Torres is stranded in the most expensive city in the country and hasn’t earned wages in nearly a year. Her work visa was tied to her abusive employer, and she has been waiting for a new work permit since last summer.

“I’ve never had money so I’m used to not having anything,” said the single mother, whose five-year-old daughter resides in the Philippines and hasn’t received support payments in months. “But my family — having them — that’s everything to me.”

Migrant workers have been putting pressure on Prime Minister Justin Trudeau since October to reform the controversial Temporary Foreign Worker Program (TFWP), and last month, MaryAnn Mihychuk, the Minister of Employment, Workforce Development and Labour, told the Globe and Mail she would ask a parliamentary committee for proposals to fix it.

No details have been provided on the timeline and scope of this review however, and migrant workers’ rights organizations are getting impatient.

A call to end Conservative changes

"We’re still living in Harper-era policies,” said Syed Hussan of the Coalition for Migrant Worker Rights Canada (CMWRC) in Toronto. “Migrant workers continue to live and work under the existing rules, which lock workers into bad jobs and deny them labour mobility.”

While the TFWP more than doubled under the Harper government — from 43,419 workers in 2005 to 104,160 in 2013 according to Immigration, Refugees and Citizenship Canada — changes to the program over the last five years have been widely criticized by business and labour rights organizations alike.

They restrict the amount of time some workers can stay in Canada with a “four in, four out rule,” making it difficult to obtain permanent residency, and limit foreign workers to 10 per cent of a company’s workforce in low-paying jobs.

They prohibit employers from hiring foreign workers in areas of high unemployment, which prevents many migrant workers from leaving their current positions and being hired elsewhere, and also tightened the criteria and raised the price of the Labour Market Impact Assessments employers must obtain to prove they couldn’t have hired a Canadian for the kind of work they require.

“There’s a litany of concerns,” Hussan explained. “We’re not just calling for migrant voices to be central to the review on the TFWP, but for the expansion of human rights, labour rights, social entitlements and most importantly, permanent immigration status for migrant workers as the core guiding principles of such a review.”

Many caregivers, seasonal agricultural workers, and other migrant labourers work six or seven days a week, he added, up to 16 hours per day. In her circle of nannies in Vancouver alone, Torres even knows women who are earning $300 per month — more than $1,000 below the minimum provincial wage.

“That’s what happens when you’re from a third world country,” she said. “You’re desperate for anything, because it’s better than what you know or you’re used to at home.”

Though Torres is currently living with support from an uncle in the U.S. and Migrante BC, a local migrant workers rights organization where she now volunteers, she counts herself among the lucky ones. While she waits for a new work permit, she said one of her friends is being forced to cook homemade meals for her employers’ dogs and try it first before she feeds it to them, in addition to working 18-hour days caring for their children.

“It’s like every day you’re fighting depression because you’re far away from the people who have been your support,” she said, wiping away tears. “But there’s always a fear that when you complain you’ll lose your job, and when you lose your job like I did, you can’t work without any documentation.”

Changes to the TFWP, including the Labour Market Impact Assessments (LMIA) have made it more difficult to get a new work permit, she explained, which means anyone who wants to report abuse faces at least six months of unemployment.

According to Natalie Drolet, a lawyer for the West Coast Domestic Workers’ Association, roughly one in three of her organization’s 2,500 annual clients has experienced some form of abuse.

Though the federal government has taken measures to protect migrant workers from abuse, including a confidential tip line, more employer inspections, and stiffer consequences for rule-breakers, many migrant workers don’t know or understand their rights, said Drolet.

The West Coast Domestic Workers' Association is one of many groups that has joined the Coalition for Migrant Worker Rights Canada in calling for an immediate government review of the TFWP. Their demands include open work permits (not tied to a single employer), permanent immigration status upon arrival, and removal of the “four in, four out” regulation and LMIA fees.

“[Migrant workers] have made the biggest sacrifice possible to provide for their families back home, which is being separated from their loved ones, and that separation often lasts an average of about seven years," said Drolet. "I think if the average Canadian knew what the struggles are, they would be sympathetic and they would care."

When asked by National Observer, when a review of the TFWP might take place, Employment and Social Development Canada responded:

“The Minister plans to ask a House of Commons committee to study the Temporary Foreign Worker program to provide advice and suggestions for reform and improvement. More details will be made available at a later date.”

While the Liberals did not propose reforms to the TFWP during the election, in 2015 the party committed to a new plan for Canadian immigration and economic opportunity that would make life easier for migrant workers.

As part of his platform, Trudeau promised to restore the maximum age for dependents to 22 instead of 19, which would help newcomers bring their children to Canada, and grant immediate permanent residency to new spouses entering Canada, rather than imposing a two-year conditional status on them. He also committed to eliminating the $1,000 LMIA fee for those seeking caregivers to care for family members with physical or mental disabilities, which would speed up the process for women like Torres seeking a work permit in Canada.

Asked earlier this year where the government stood on delivering these promises, Immigration, Refugees and Citizenship Canada spokesperson Jessica Kingsbury said proposals to meet these commitments are currently being developed, as “work to bring in 25,000 Syrian refugees has been an initial key priority.”

While changing the age of dependents will require a lengthier, regulatory amendment process, Employment and Social Development Canada told National Observer that LMIA fee is expected to be eliminated by the end of the year.

Hussan applauded these initial efforts, but encouraged the government to take bolder action:

“What we’re hoping for is a comprehensive review,” said Hussan. “We’re interested in ensuring that the review scope and timelines are done in such a way that migrant workers can actually participant and lead the discussion... without the fear of reprisals from bosses and immigration enforcement."

These conversations must also take place in a way that doesn't pit migrant workers against unemployed citizens or permanent, he explained, and celebrates the critical contribution of migrant workers to building Canadian society.

For Torres, who has found a new employer but is waiting on a permit, these changes can't come soon enough. Time is running out for her to fulfill the working hour requirements for permanent residency before facing deportation to the Philippines in 2018.

“I came here with the goal of getting permanent residence and I knew coming here as a caregiver would not give me the money I need to live a full life," she explained. “I just want people to know that we exist. I feel like nobody knows, no one cares, no one wants to do anything about it... but we take care of kids, we raise children, we take care of the elderly, and we help the workforce to work because we’re the ones staying at home. We keep the households running.”

Is Canada addressing the long-term mental health of immigrants?