By Barry Saxifrage | Analysis, Energy | March 16th 2016
#27 of 2003 articles from the Special Report: Reports from the Race to a Safer World 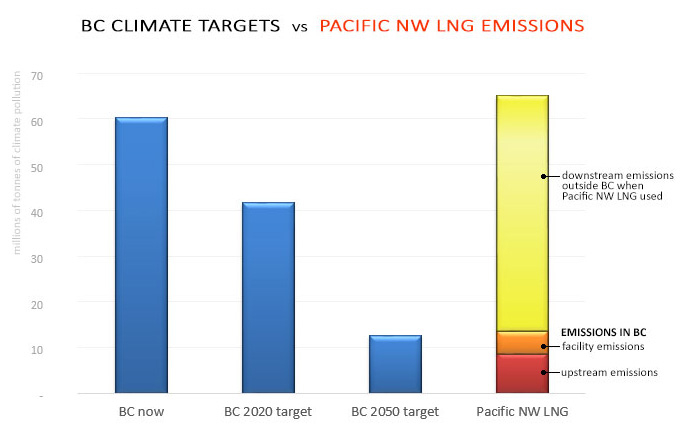 The decision whether to approve or reject this proposal is now in the hands of Prime Minister Trudeau. It will be his first major climate-vs-fossil test. And it is a doozy.

An analysis of his government's Draft Environmental Assessment Report makes it clear that this decision will force Mr. Trudeau to choose between two of his highest-profile goals:

The choice he makes will be a game changer, one way or the other, for the climate fight in Canada.

The province has a legally-binding commitment to reduce emissions 80 per cent below 2007 by 2050. Based on Canada's National Inventory Report, that works out to around 12.5 million tonnes of CO2 (MtCO2) by 2050.

The Pacific NW LNG project, however, is expected to pollute that much all by itself.

In its assessment report, Canadian Environmental Assessment Agency (CEAA) determined that the BC climate pollution from this project could exceed 13 MtCO2 per year. That includes over 8 MtCO2 to extract and transport the required amount of fracked gas to the facility, and another 5 MtCO2 to turn it into LNG and load it onto the tankers for export. The project and its associated BC emissions would continue beyond 2050.

The agency's report bluntly concludes that these emissions will be:

"high in magnitude, continuous, irreversible and global in extent".

The Pembina Institute in their official submission say the assessment report "likely underestimates" these emissions. Both methane leakage rates and methane's warming potential are almost certainly higher than assumed by the report.

Given the budget-busting size of the project's climate pollution, approval by Mr. Trudeau would set a very clear precedent that even the most formal climate commitments, enshrined in law, can be ignored -- or even nullified by fiat -- when permitting new projects.

To try, or not to try, that is the question?

Right now British Columbians are deciding whether to significantly increase our carbon tax and other climate policies. 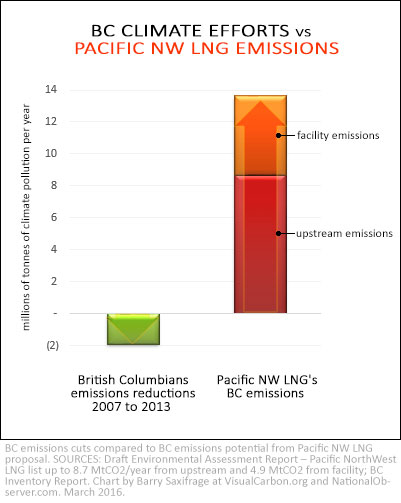 All our combined efforts have reduced our provincial emissions by around 1.8 MtCO2 per year so far.

As my chart on the right shows, the Pacific NW LNG project alone could wipe out all this work more than six times over.

If Mr. Trudeau approves Pacific NW LNG he might find himself having to explain to frustrated British Columbians why they should continue sacrificing to cut emissions when all their past efforts just got wiped out several times over by his approval of this one new project.

Expanding markets for our fossil carbon

On the other side of the coin, however, is the huge opportunity to open up a "supersize me" pipeline to tidewater for Canada's fracked gas. That would allow nearly twenty million tonnes of LNG to be loaded on tankers and shipped to foreign markets every year for decades.

This would jump start a whole new fossil fuel industry for Canada: LNG.

Mr. Trudeau has often said he is in favour of getting our fossil carbon to tidewater. Recently he said that approval of new pipelines could be a way to pay for our climate mitigation efforts.

Approving this new mega-project would send a clear signal that the benefits of expanding markets for Canada's fossil carbon is still the top priority of the federal government.

His decision is expected in just a few weeks.

The reason this Pacific NW LNG decision poses a dilemma for our Prime Minister is because Canada lacks a climate test for new mega-projects.

We have climate targets. But we don't have any requirement that new projects are compatible with our targets.

We say we want to reduce emissions while also growing our economy. But we don't even bother to measure if a new project is compatible with these goals.

As I wrote about recently, to successfully meet our national climate targets we need to do more than just cut emissions. We also need to nearly double the GDP our economy produces per tonne of climate pollution. That is a huge task by itself. But we currently ignore the critical metric of how much GDP and jobs per tonne of climate pollution a project can deliver. As a result, we are flying blind. This can be clearly seen by the fact that the number one driver of climate failure in Canada has been the rapid expansion of extremely-low-GDP-per-tonne emissions, like this project is likely to be.

Just like we can't lose weight by continually increasing the percentage of junk food in our diet, we can't lose the carbon weight we've promised if we keep increasing the percentage of "junk carbon" (high emissions, low GDP) in our carbon diet. Imagine trying to lose weight without ever reading the nutritional labels. Of course we are failing at our carbon diet.

Until we require clear climate metrics and climate tests we will all be navigating the increasingly treacherous climate future in the dark.

And make no mistake, this current decision -- as big as it is -- is just one of many ahead.

A couple years ago I created the following graphic showing the carbon tsunami that is heading for BC's coast. Almost none of these projects have been taken off the table. And more are emerging. The scale of Canadian fossil carbon resources looking for tidewater access is massive. Particular projects ebb and surge over time. Right now, the Pacific NW LNG is one of the many that are surging forward with urgency.

As Mr. Trudeau famously said, "its 2016". Maybe it's finally time to include serious climate tests for our most fateful climate decisions. His upcoming Pacific NW LNG decision gives him a chance to do just that.