‘It’s the last place we have for our people’: Doig River’s last stand amidst fracking boom 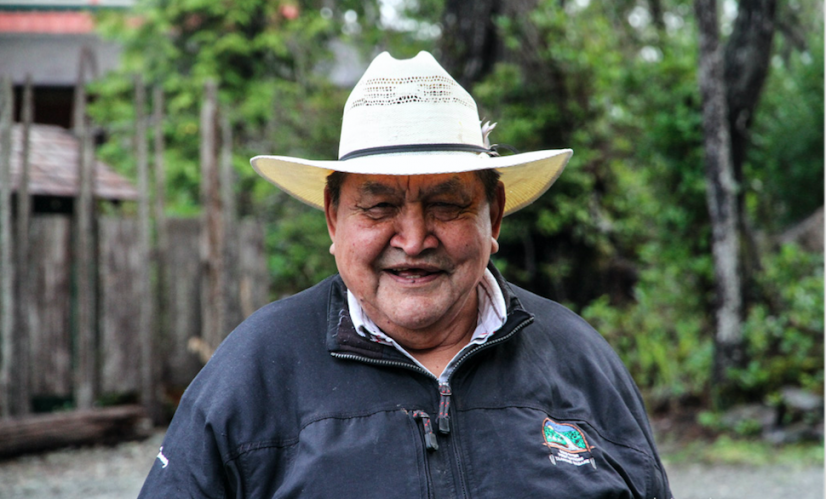 In the heart of one of the continent’s biggest fracking booms stands a place the people of the Doig River First Nation have revered for generations.

Elders remember visiting this ancient spruce forest in northeastern B.C. as children on horseback. There they’d hunt moose, grieve their loved ones, heal their spirits.

So as oil and gas wells began to crop up all over their traditional territory, the elders of Doig River decided to do something to protect their most sacred place.

In 2011, they declared a tribal park called K’ih tsaa?dze, which means “old spruce” in the Dane-za, or Beaver, language.

“It’s the last place we have for our people,” former chief Norman Davis told me one morning last summer in the Doig River community centre (in December, the community elected a new chief, who is also supportive of the tribal park.)

Tea and coffee were brewing as elders sat around chatting and watching TV. The CBC was reporting on the Petronas LNGdebate in the B.C. legislature — the impacts of which will be felt directly here in natural gas-rich northeastern B.C.

Doig River First Nation, home to 300 people, just so happens to sit atop the Montney Shale, which contains reserves of 449 trillion cubic feet of natural gas and more than one million barrels of oil.

As a result, the nation has 8,500 oil and gas wells in its backyard on the B.C. side of the border alone. Many of those wells use hydraulic fracturing or “fracking,” which involves sending a high-pressure combination of water and chemicals underground to break apart the rock and release the oil or gas.

It’s a foreign process to people who were born on this land — people like band councillor Gerry Attachie who remembers seeing surveyors marking out the border between B.C. and Alberta in K’ih tsaa?dze.

“We’ve been there forever, even before they made the Alberta-B.C. border,” he told me. “We use it for healing. Spiritual healing. We get healed out there and we pray.”

‘Before the White People Destroyed Our Land’

I piled into a truck with three elders — brothers Tommy and Billy Attachie and Sam Acko — and headed out to see K'ih tsaa?dze with my own two eyes.

Sam drove while I asked questions about the elders’ memories on this land. Often the men broke into conversation in their mother tongue, Beaver.

“I was riding behind my grandma on her saddle horse,” he said. “It was a day-long trip on a horse. We’d take a dog team in the winter. We would make a trip of it and camp at various places along the way. That was before the white people destroyed our land with roads and well sites.”

We bumped down a gravel road lined with willows and spruce. Industry signs marking oil and gas access roads flew by on the side of the road.

As we arrived at the first K'ih tsaa?dze sign, a gas plant hummed in the background no more than 100 metres away.

By the time we passed an oil pumpjack, Tommy and Billy had been lulled to sleep.

Sam and I continued talking as he drove.

“After you leave K'ih tsaa?dze it’s like your spirit is renewed,” Sam said.

He told me about continuing to use the land as a bush school and reminisced about using K'ih tsaa?dze as a hunting camp in the early ’70s and drying moose there.

“Telling these stories always makes me hungry,” he said with a laugh.

Thankfully, we had a picnic packed and soon arrived to an old-growth grove of spruce trees that has miraculously withstood multiple forest fires.

“There is something that we don’t know that protects this area,” Sam said.

With the smell of sap thick in the air we sat down on wooden benches for lunch. The mosquitoes were so fierce they bit right through my jeans.

Sam talked about tuberculosis and smallpox wiping out his relatives. “We didn’t have a word for cancer then,” he lamented.

This is the place the people of Doig River come when they’ve lost someone in their community — for its peace and quiet.

However, keeping this place quiet has proven to be quite a challenge.

In 2013, the Province of Alberta wrote to Doig River First Nation, ordering them to remove their signs for the tribal park on the Alberta side of the border. When they didn’t do so, the government removed the signs themselves.

The letter from the Ministry of Environment and Sustainable Resource Development stated: “K'ih tsaa?dze Tribal Park does not meet the criteria for the establishment of a conservation area in Alberta.”

That was under the previous Progressive Conservative government. Since the NDP took power, discussions have begun about the tribal park, says Jane Calvert, land and resource manager for Doig River First Nation.

In 2014, the Tsilhqot'in Nation declared Dasiqox Tribal Park as a way to proactively assert itself on its territory. (Read DeSmog Canada's feature on Dasiqox: 'It's No Longer About Saying No': How First Nations Are Taking Charge With Tribal Parks).

K’ih tsaa?dze is unique in that it’s on treaty territory.

“Some tenure sales have been reverted back to the crown, which is tremendously good news,” Calvert said.

The Legal Standing of Tribal Parks

Jack Woodward, aboriginal law expert and lawyer in the landmark Tsilhqot’in title case, told DeSmog Canada that declaring a tribal park is a way of putting government and industry on notice that this is the minimum territory required to continue exercising aboriginal or treaty rights — rights that are ultimately constitutionally protected.

“The word ‘park’ means two quite different things,” Woodward continued. “In the regular federal and provincial sense, it means something about locking it up and keeping human beings out, whereas in a tribal park it means something closer to a sustainable ongoing use.”

In the case of a treaty right to hunt moose, for instance, those moose need a relatively intact place to live.

“Really what this comes down to is protection of habitat,” Woodward said. “You declare a tribal park and what you’re saying is: ‘Cross this line and we’re going to get an injunction to stop you from doing the industrial activity anyway.’ ”

The Doig River First Nation’s ability to hunt moose has been severely impacted.

“We’ve done some recent research on moose and what we found is that in the lifetime of our elders, the community harvest for moose has been reduced by 75 per cent,” Calvert said. “It’s not because they don’t like moose or they want to go to the grocery store. It’s because moose is disappearing from the landscape, just like caribou.”

The High Cost of Fighting Industry

That in and of itself is a victory.

However, the alternative isn’t cheap either. Doig River First Nation has had to fund all of the scientific work, including water and soil contaminant samples and an ecosystem-based management plan, for the tribal park.

“It’s been costly, but so is trying to fend off applications for oil and gas work,” Calvert said. “It’s more cost effective to do it proactively.”

Since the declaration in 2011, there has been no new development in K’ih tsaa?dze on the B.C. side of the border, although existing development was allowed to run its course.

“They know we are really serious about protecting this area,” Calvert said.

The declaration is an indicator of a resurgence of First Nations power, said Faisal Moola, director general for David Suzuki Foundation, which has provided research support for the park.

“This will become very iconic in B.C. as First Nations begin to move from opposition to large-scale industrial development or trophy hunting to articulating an ambition of how the land can be used differently under their own governance,” Moola said.

“This is really about First Nations re-asserting their governance over the land.”

Recently, Calvert attended a gathering in Tofino of indigenous leaders from around the world involved in creating indigenous conserved areas.

“I had this sense that I was part of something very, very important — that we’re making history,” she said. “Sometimes you’re living in the moment and you don’t realize how important it is until years later. We’ll be looking back on this thinking we were part of a very important movement.”

This is part 2 of a series. Read How B.C.’s First Nations are taking charge with tribal parks.