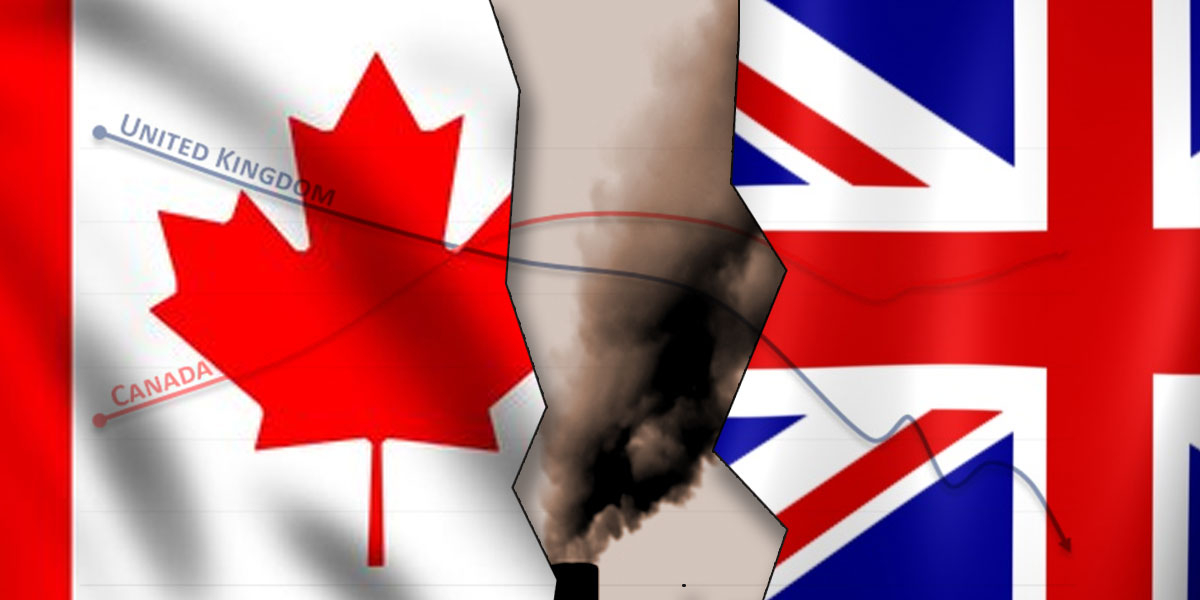 Will he be able to deliver?

A side-by-side comparison with one of our closest allies, the United Kingdom, provides some valuable insight into what can be done, and what it takes.

Compared to Canada, the United Kingdom has a much larger economy and far more people. Back in 1990 they also dumped out a whole lot more climate pollution than we did. Two hundred million tonnes per year more.

While Canada has been increasing emissions, the UK has been busy cleaning up their economy. Big time. Take a look…

As the chart shows, the UK with its $2.5 trillion economy managed to cut climate pollution by an impressive 35 per cent since 1990. In contrast, Canada increased our pollution by 20 per cent. As a result the two nations have traded pollution places. Now Canada is the nation dumping out two hundred million tonnes more per year.

Over these last couple decades, both nations have been making a series of high profile climate promises: at Kyoto in 1997, at Copenhagen in 2009 and just last week with the signing of the Paris Accord.

At each step along the way the UK decided to make much bolder commitments than we did. Even so, the UK has been meeting their promises while Canada isn't coming close. My next chart tells the tale. It shows what each nation did with their climate pollution since 1990 compared to what they promised to do.

For Mr. Trudeau and Canadians, the UK provides a real-world example of a wealthy, top-tier economy, in a northern region, that has managed to significantly reduce their emissions and meet their climate promises.

As a bonus to the UK, their falling emissions are priming their economy for the coming tectonic shift to a post-carbon world. Today the UK economy produces $4,800 in GDP from each tonne of climate pollution (tCO2). Canada makes less than half as much, at $2,200. As we will see below, as soon as it become imperative to reduce climate pollution then continuing to expand the lowest-GDP emissions in your economy become a serious problem.

Why Canada is missing our climate target

Canada's up-coming climate target for 2020 was made by former Prime Minister, Stephen Harper in Copenhagen.

As my next chart shows, we are currently more than a hundred million tonnes above where we promised to be. What is causing us to miss this much? It turns out that virtually all of this huge climate gap has been caused by just two sources:

Since 1990 we have allowed each of these budget-busters to increase climate pollution by around ~53 MtCO2. Let’s take a look at each of our two biggest climate pollution failures, to see what happened … and what the UK did differently.

Back in 1990, Canada and the UK emitted similar levels of climate pollution from their nation's cars and trucks.

Since then, however, Canada's vehicle emissions surged 44 per cent, while the UK's declined slightly.

What did the UK do differently?

For one thing, starting back in the early 1990s, the Conservative government of Prime Minister John Major decided that the UK would be better off if it was less dependent on gasoline. So they implemented a "Fuel Duty Escalator" that increased gasoline taxes an average of around seven cents per litre, per year, for a decade.

To put that gas tax increase in a climate perspective, it's exactly the same as increasing a carbon tax by $30 per year, for ten straight years. A G8 report labelled this UK policy a “best practice” for addressing climate change. In Canada, British Columbia's Climate Leadership Team recently recommended a similar, though much less ambitious, proposal to increase its official Carbon Tax by $10 per year.

As Mr. Trudeau plans carbon pricing he might want to keep in mind that he would need to add a $500 carbon tax on gasoline to match what the UK does already. BC's proposal to increase its Carbon Tax by $10 per year would require fifty years (!) before it matches what the UK has already done.

So it is no surprise that climate pollution from cars and trucks is heading in opposite directions in the UK vs Canada. The question is whether our Prime Minister will do something about it over here?

The other half of Canada's 2020 emissions overshoot comes from the Alberta tar sands industry. This particular source of pollution is proving lethal to Canada's climate commitments for two reasons:

In a low-carbon world, either of those traits would be a real problem. Together they're double trouble.

My next chart shows this clearly. It's based on the Canadian Association of Petroleum Producers (CAPP) most recent supply scenarios.

First take a look at the orange line -- CAPP's "slower growth" scenario. Tar sands pollution surges to 17 per cent of our national emissions budget by 2030. Amazingly, this is what happens if we don't build more pipelines.

Now check out the red line showing CAPP's "faster growth" scenario. That's what we get with one or two more big pipelines. Mr. Trudeau is pushing hard for this scenario. Tar sands emissions leap to around a quarter our nation's climate budget by 2030. And they are heading steeply upwards from there.

Problem number two is that Alberta's tar sands industry produces very little wealth and very few jobs, per tonne of climate pollution they release. This is called carbon efficiency and it is measured in $GDP produced per tCO2.

How bad is it? Here are some quick numbers for context.

Today, Canada's economy averages $2,200 in GDP per tCO2. That has to jump to around $4,000 for us to meet our 2030 climate commitment while also maintaining our standard of living (per-capita GDP).

The Alberta tar sands industry produces only around $400 in GDP per tCO2. Ten time less than what we need.

Can we possibly do both? Can we let the tar sands fill a quarter of our shrinking emissions budget with such low value emissions and still stay within that budget?

Amazing our government hasn't bothered to find out.

Canada has never created any plan, which if followed, would meet any of our targets. Mr. Trudeau promised to deliver a 2030 plan by the end of his in first 90 days in office. But he didn't. Instead he pivoted to pushing a "faster growth" expansion of tar sands without first having a plan to handle the resulting flood of emissions. Sound familiar?

Canada's on-going failure to create a plan to meet our international commitments is another major difference with the UK.

If the UK can meet its more ambitious climate commitments, we should be able to at meet ours.

Maybe starting with a plan would help.