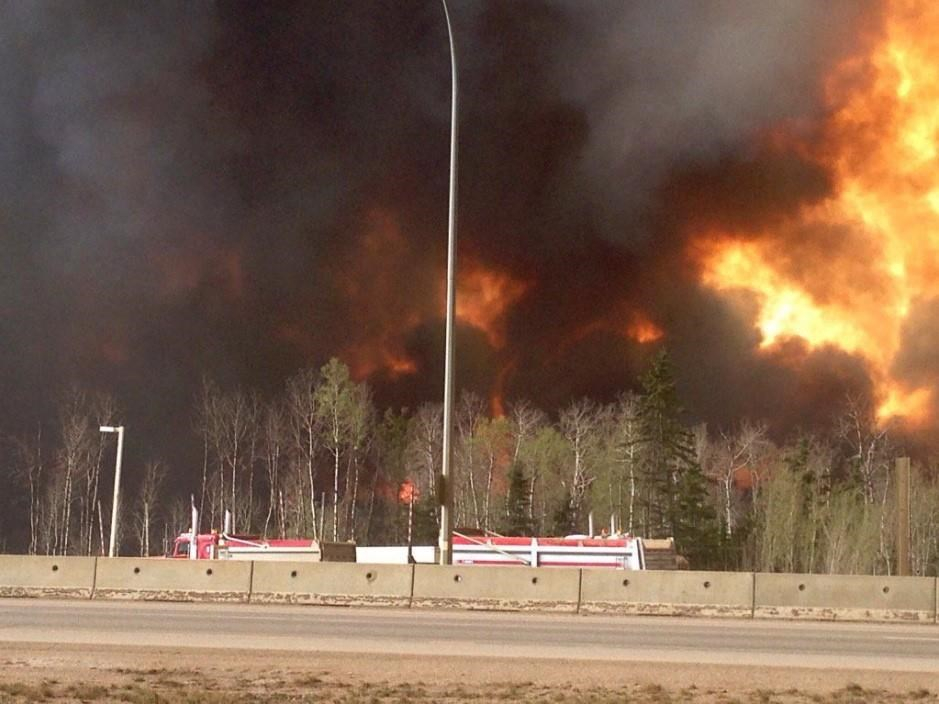 Wildfire. Photo by The Canadian Press.
Previous story
Next story

A raging wildfire has forced almost 30,000 people from their homes in the northern Alberta oilsands city of Fort McMurray.

Scott Long of Alberta Emergency Management says the flames have burned a number of structures, but he can’t say how many.

Residents were ordered to flee several neighbourhoods in Fort McMurray as flames from a growing wildfire whipped by winds threatened homes and businesses.

Crews had seemed to be making progress controlling the blaze, burning since the weekend, but the situation worsened quickly. By mid−afternoon people from three neighbourhoods were told to leave immediately.

Sandra Hickey lives in a neighbourhood that was still under voluntary evacuation, but she was anxious nonetheless.

Carina Van Heerde, a reporter with Fort McMurray radio station KAOS, said a trailer park that was evacuated on Monday was burning. She said the fire was advancing towards a Super8 motel and a gas station.

Pictures posted on Twitter showed long lines of traffic and skies darkened by thick smoke as flames licked the edges of roads.

Fire officials had already warned earlier in the day that rising temperatures and low humidity could help the fire grow.

"Don’t get into a false sense of security," fire chief Darby Allen said during a media briefing before things worsened. "We are in for a rough day."

Unseasonably hot temperatures combined with dry conditions have transformed the boreal forest in much of Alberta into a tinder box. The wildfire threat ranging from very high to extreme.

The Alberta government banned all open fires except in designated camping sites in forested areas due to the threat. There were about 30 fires burning in the province.

The province was calling in more reinforcements to Fort McMurray, including 100 more firefighters and a giant helicopter that can dump more than 2,000 litres of water at a time.

Crews were busy cutting down a line of unburned trees in the path of the flames to deny the fire fuel. Air tankers were dropping carpets of fire retardant while other aircraft released water.

"It is going to challenge us throughout the day," he said. "At this point we cannot say that there is any part or portion of the line that is 100 per cent secure or contained."

Officials were also keeping a close eye on the situation in Saskatchewan. The wildfire threat in forested areas ranged from moderate to extreme. About a dozen fires were burning in remote areas.

Wildfires in Saskatchewan last year forced about 13,000 people from their homes and burned 17,000 square kilometres of forest.