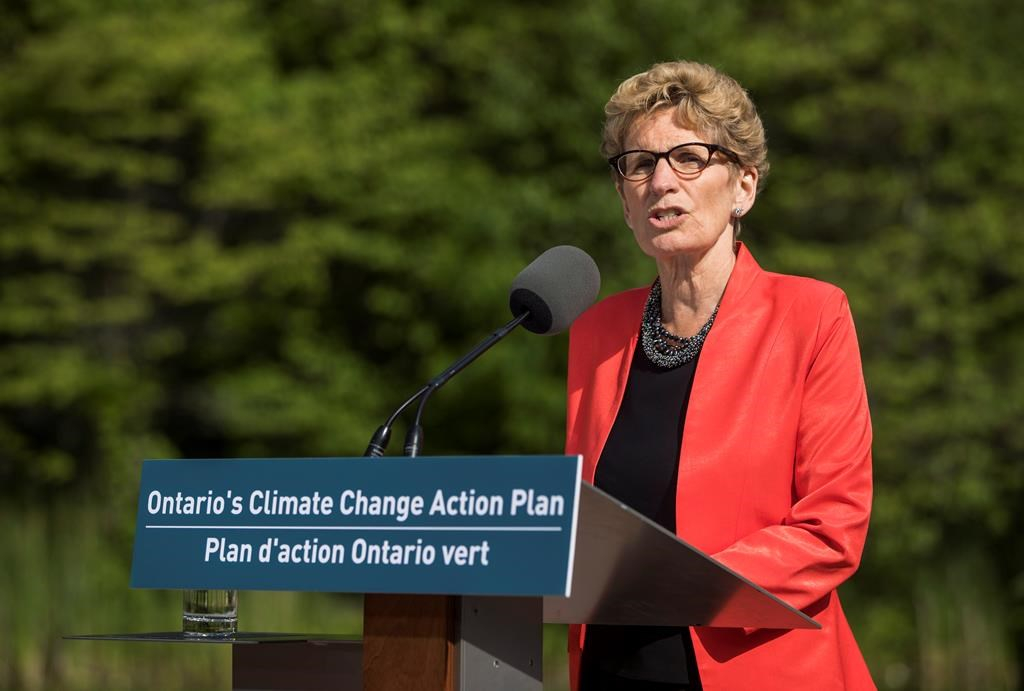 Ontario’s climate change action plan, which will provide billions of dollars in subsidies and incentives to businesses and homeowners, was greeted with cautious optimism Wednesday by environmentalists and businesses.

The province will spend up to $8.3 billion on a range of programs to encourage people and companies to switch to more energy−efficient heating systems, buy electric or hybrid cars, convert big trucks to natural gas, add more bio−fuel to gasoline, and help the agriculture and industrial sectors adopt low−carbon technologies.

Most of the money will come from a cap−and−trade program for industrial polluters that the Liberal government expects will raise $1.9 billion a year. All of the cap−and−trade money will go into a dedicated fund for lowering Ontario’s carbon footprint.

Two groups representing automakers said continued rebates of up to $14,000 for electric vehicles, free overnight charging for four years, and a "cash−for−clunkers" program to get older cars off the roads will help create consumer demand for EVs.

"The rebates, combined with looking at renewable fuels, is sort of a broad−based approach to reducing emissions overall from the transportation sector," said David Adams, president of Global Automakers of Canada.

"Many of the initiatives announced today will help consumers understand that electric vehicles are part of the future, of their future," said Mark Nantis of the Canadian Vehicle Manufacturers Association.

However, the manufacturers want more details on the cap−and−trade plan, which takes effect in January when Ontario joins a carbon market with Quebec and California.

"In our industry, many of the investment decisions are upon us now, so there’s many details that we have to work out in collaboration with the government," added Nantis.

The Ontario Home Builders’ Association said getting to "net zero" carbon homes by 2030 will require extensive consultations with the industry, and called for a cost−benefit analysis for consumers.

"We need to make sure that the upgrades to the 2030 Building Code are worth it to the consumer," said the association’s president, Joe Vaccaro.

Greenpeace said Ontario is on the right track by trying to phase out fossil fuels and by recognizing that climate change is an opportunity as well as a threat.

"Lots of bad things will happen if we don’t break our addiction to fossil fuels, but there are also a lot of good things — green jobs, cleaner air — that come with action on climate change," said Greenpeace Canada spokesman Keith Stewart.

The International Institute for Sustainable Development, a non−profit research group, strongly supports the plan to put cap−and−trade revenues back into actions that will help lower greenhouse gas emissions.

"We hope that these provincial strategies will bolster our federal leaders’ efforts to develop a national action plan on climate change, including an ambitious cross−country price on carbon emissions," said Institute spokesman Amin Asadollahi.

The Pembina Institute, a clean energy think tank, said the government is "grappling with the tough choices" required to meet its emission reduction targets.

"By providing both the ambition, and the required support to businesses and consumers, this is a good step towards our climate goals," said Pembina’s Eli Angen.

Details on rebates for home retrofits will come later, but Environment and Climate Change Minister Glen Murray said no one will have to get rid of their natural gas furnace or old car until they’re ready.

"We’re not forcing anyone to do this," he said. "We want people to avoid the carbon price in the future, and the way you do that, is to use very low or non−carbon emitting fuels and technologies in your homes and transportation systems."

Premier Kathleen Wynne said the province will invest in projects that will "give families and businesses the ability to lower their carbon footprint, and their energy bills."

The Progressive Conservatives called the plan "a laundry list of Liberal promises" based on money the government doesn’t even have yet.

"I was very concerned today at the manner in which they continually dodged what this is really going to cost Ontarians," said PC environment critic Lisa Thompson.

Green Party of Ontario Leader Mike Schreiner said Ontario needed bold action on climate change 10 years ago, but he’s concerned the Liberals’ plan favours businesses, especially big polluters who will get exemptions early on in the cap and trade plan.

"One hundred of Ontario’s largest polluters are getting a free pass on the cap−and−trade plan, and it looks like most of the financial benefits are going to business and not individuals," said Schreiner. "So is this fair to the people of Ontario?"