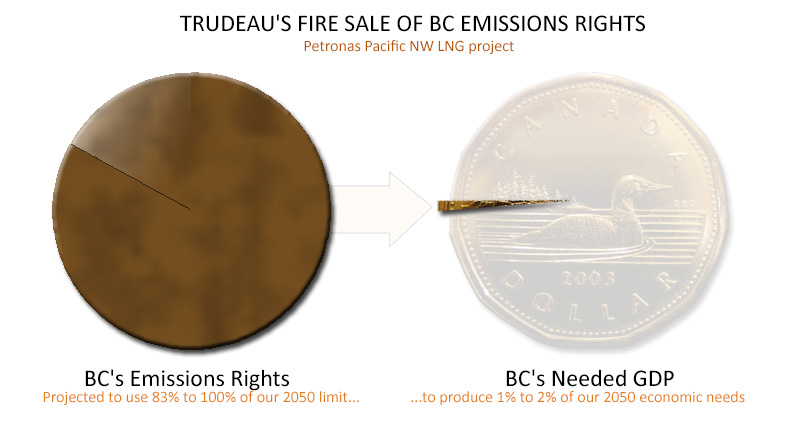 As a British Columbian I am seriously confused and upset by the Trudeau government's recent decision to hand over nearly all of our province's most valuable and critical emissions-rights, to a foreign nation. And for what? Maybe 1% of our GDP?

No economy can possibly survive if its emissions budget is blown to produce just 1% of needed GDP. What exactly is the remaining 99% of BC's economy and our civil society supposed to do?

WHAT TRUDEAU GAVE AWAY

The Trudeau government just approved the Petronas Pacific NW LNG project saying it was good for the environment and our economy. How so? To start with, their own "Draft Environmental Assessment Report" states that BC emissions from it are projected to range from 11 to 13 MtCO2 per year. That is true even with their newly announced cap of 4.3 MtCO2 per year from the compressors. Their same report states clearly that these levels are "high in magnitude, continuous, irreversible and global in extent ... likely to cause significant adverse environmental effects." In short, it's a big honking whack of climate pollution.

VS. WHAT WE HAD LEFT

It's so big in fact, that as we all know it single-handedly monopolizes British Columbians' legal, moral and ethical emissions limit of just 13 MtCO2 per year by 2050. In reality we'll be very lucky if we actually get to emit that much, given what US President Obama called the "terrifying trends" of accelerating climate impacts, combined with the rapidly growing international push to keep global temperature rise below truly dangerous levels. You remember Paris and "well below 2C", I'm sure.

OUR MOST VALUABLE EMISSIONS

These last 13 MtCO2 available to British Columbians -- that Mr. Trudeau just handed over for a single project -- are the crown jewels of our carbon emissions. These are, by definition, our most expensive and most difficult emissions to cut.

I've read a lot of economic climate studies and they all show that the "marginal abatement cost" (MAC) for an economy's emissions range from really cheap to super expensive. In BC, the cheapest-to-cut emissions will obviously be long gone by 2050. What will be left will be our most intractable and most costly to cut.

To illustrate this, I've included a generic provincial MAC chart from Canada's Ecofiscal Commission. Here's what they say about it: "early reductions tend to be relatively easy and therefore inexpensive, but additional, deeper reductions require increasingly expensive investments."

I added the orange shading to highlight the last fifth of a province's emissions, which equals BC's 2050 maximum carbon budget.

OUR MOST CRITICAL EMISSIONS

These last-to-be-cut emissions will also be the most critical to BC society and economy. We will need them for our most essential tasks that we won't have full zero-carbon solutions for by then. Oh, I don't know, maybe things like growing food, critical aviation, remote power and a host of other essential economic and security needs. What's the plan for these now?

Not only did all of British Columbians' most critical emissions get handed over to the Malaysian government to use, Trudeau signed them off at fire sale prices.

I'm certainly not confused by the fact that foreign nations, like Malaysia, and their state-owned corporations, like Petronas, are eager to grab control of other nation's last and most valuable emissions rights. What I am confused by is why our own government would sell them out from under British Columbians for chump change compared to their real value to us.

Consider. A best-case scenario with Pacific NW LNG is that it might lead to a near doubling of BC's natural gas extraction -- an industry that currently produces around 2% of BC GDP. So the economic upside is what…maybe a 1% boost in BC's 2050 GDP? All our emissions rights for 1% needed GDP? That's a great deal. For someone.

What's next? Maybe a fire sale of Ontarians' critical 2050 emissions-rights to Russia for a couple percent of GDP? How would that be different? Or maybe giving all of Albertans' crown jewels of emissions-rights to Texas and Chinese corporations for a fraction of their needed GDP. Oh, wait…

This fire sale of critical emissions is a perfect example of why Canada continues to fail to get anywhere close to our climate commitments.

Every tonne of climate pollution comes with a bag of money (GDP) attached. Some come with bulging sacks of cash. Others with a few jingling coins. If we are going to cut our total tonnes of climate pollution, then we'd better make sure that the ones we have left come with lots of cash in those bags. This is so fundamental a requirement that the metric for keeping track -- carbon efficiency ($GDP/tCO2) -- is a primary measurement used all over the world to measure climate progress.

So, let's evaluate the Petronas PNW LNG deal through this primary metric of carbon-efficiency.

To meet Prime Minister Trudeau's 2030 climate commitment, our nation's economy must increase our carbon-efficiency from $2,500 to well over $4,500 in GDP per tCO2. Anything less and our standard of living falls. And if we want our standard of living to keep growing as in past decades, then we will need make around $5,500 in GDP per tCO2. So $4,500 to $5,500 per tonne of climate pollution is the required measure of success to evaluate major climate pollution decisions against.

BC's natural gas sector, however, is one of our nation's super-climate-polluting industries, returning extremely little GDP per tCO2 emitted. They are so carbon-inefficient that they produce only around $400 GDP per tCO2. That's an itsy bitsy, teenie weenie fig leaf of what we require from our remaining crown jewels. Hardly the first choice to give almost all your remaining carbon budget to. It's not even a good last choice. It flat out fails the most basic climate economic test: can your limited emissions produce enough money for your citizens?

Approval of this project is a Catch-22 worthy of Milo Minderbinder: sell our most valuable emissions-rights at a huge loss, but make up for it by volume.

The fact that the Petronas Pacific NW LNG project is such a huge, budget-busting whack of new carbon pollution is bad news for our climate. The fact that it will gobble up British Columbians' most valuable and most critical remaining emissions-rights for one percent of needed GDP is a serious disaster for our future low-carbon economy.

DOUBLING DOWN ON LOW-GDP CLIMATE FAILURE?

Our Prime Minister's next big climate pollution decision is whether to significantly expand Alberta's bitumen industry by approving the proposed Kinder Morgan mega-pipeline into Vancouver.

Here again we see the same pattern of handing over nearly all our most valuable and critical emissions rights in exchange for just a few percentage points of GDP. Only this time the low-GDP climate failure is playing out at a national scale.

To start with, the Alberta government gave their bitumen industry 100 MtCO2 per year of Canadians' dwindling future emissions rights. They call it an emissions "cap". But as my chart clearly shows, it allows their industry to keep expanding how much of our nations' carbon budget they grab for themselves. From 4% in 2005 to 19% in 2030 -- and rapidly upwards to over 80% by 2050.

And once again it is happening at fire sale prices. That's because the bitumen industry, like BC's natural gas industry, is extremely carbon-inefficient. They produce very little GDP per tonne of CO2. Quick back-of-the-envelope estimates (see End Notes for details) shows that the industry's gross revenues are around 2% of Canadian GDP, and that revenues average only about $550 per tonne of CO2 emitted. Both are tiny fractions of what Canadians require from their dwindling emissions rights.

Choosing to spend nearly all of our nation's climate budget to generate such a tiny fraction of needed GDP, will absolutely crush any hopes of meeting our climate commitments or or achieving low-carbon prosperity in time.

In the face of surging climate impacts and global commitments to slash emissions, it is climate denial to continue ignoring how much GDP gets produced per tonne of climate pollution. It is long past time for Canada's leaders to finally implement the most basic economic climate tests for our biggest climate pollution decisions.

* Tar sands gross revenues estimates based on Environment Canada data showing the industry produces 11 barrels per tCO2 emitted, and using $50 as per barrel gross sales price. The math is 11 barrels/tCO2 * $50 = $550 per tCO2. Actual revenues that stay in Canada will be lower because of costs for foreign-sourced inputs and profits going out to foreign shareholders. Total gross revenues based on industry production of 2 million barrels a day * 365 days * $50/barrel = $37b = 2% of Canada's current $2t GDP.

* For bitumen industry to remain at their current 9% share of Canadian emissions they will need to reduce emissions to 45 MtCO2 by 2030. That's a whopping 40% higher than their 2005 emissions, but also less than half of the 100 MtCO2 they are planning to emit by 2030.