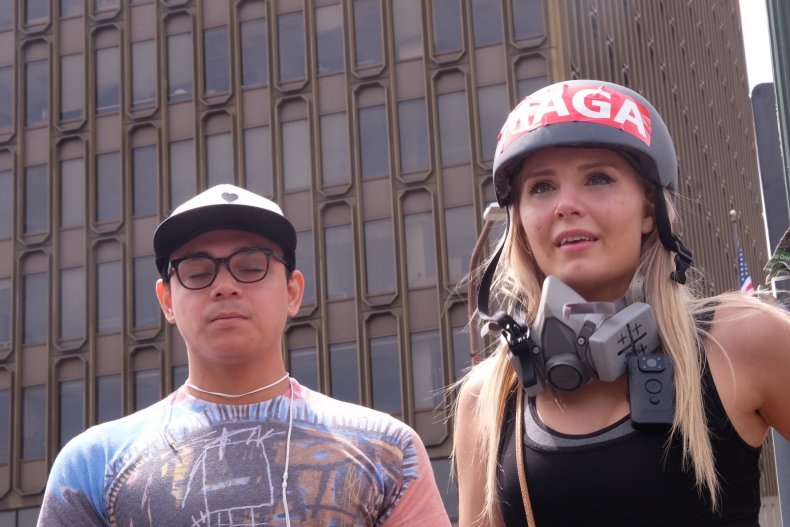 On April 15, American activists, many of whom support closed U.S. borders, held a “Patriots Day” rally in Berkeley, California. One of the marquee speakers was Lauren Southern, a Canadian.

“So you guys might be wondering what a Canadian is doing here at a free speech American patriot rally,” she said.

“But I’m here to give you a warning. Because as a denizen of the cold, northern wasteland that is Canada, nothing would please me more than to tell you guys that you will never meet the same fate that we did.

"That your history of protecting freedom and individualism will keep you safe. Unlike in Canada’s system where we have a full-on assault on Western values. Where we have people being arrested for tweets. Where we have motions being passed in our government making it outlawed to criticize Islam. People are being persecuted for comedy and fined tens of thousands of dollars by social justice tribunals for the crime of making offensive jokes.

I would love to tell you that America won’t end up like that. But that would be fake news.”

The backstory of Patriots Day is that Milo Yiannopoulos — the hater of feminism, Islam, and social justice, who was fired from Breitbart News after a Canadian 16-year-old unearthed an old video of him appearing to defend pedophilia (yes, the Canadian connections to this story are weird and deep) — had been scheduled to speak at Berkeley in February.

About 1,500 people gathered to peacefully protest Yiannopoulos' appearance. And about 150 showed up in black masks, many of them members of the Oakland-based far-left antifascist group called Antifa, to wreak havoc. The latter group caused $100,000 in property damage and school administrators canceled Yiannopoulos’s appearance.

Bikers for Trump, the far-right Oath Keepers, and the hastily formed Liberty Revival Alliance (seriously, their Facebook page has just two posts to date) planned their Berkeley event for April 15, which happened to be when Tax Marches were planned in 200 U.S. cities to protest President Donald Trump reneging on his promise to release his tax returns.

The "Proud Boys" were also involved in Patriots Day preparations. They are self-described “white chauvinists,” as well as closed-border adherents—the latter being really weird, because the group was founded by Gavin McInnes, who is British and Canadian, and like Lauren Southern, appears on the team page of the Toronto-based Rebel Media.

Rebel Media was founded by Ezra Levant, a former lawyer and Toronto resident, who has worked with on-and-off success in Canadian media, as well as in lobbying Ottawa on behalf of the oil and tobacco industries.

Levant, an ardent critic of Prime Minister Justin Trudeau, is known to Canadians for his inflammatory rhetoric on race. He was in the news for using the Nazi term "Lügenpresse" in reference to Canadian media. On March 14, he published a video by Gavin McInnes titled, "10 Things I Hate About Jews." The video was re-titled after it ignited a storm of controversy in Canada.

Levant has been sued and ordered to pay damages and issue retractions and apologies on numerous occasions. Reportedly, after Levant’s then-employer Sun Media shuttered in 2015, he crowd-funded the launch of The Rebel Media, raising $100,000—not through a public site, such as Indiegogo or Kickstarter—but by having supporters deposit money straight into a PayPal account.

To be fair, Rebel Media doesn’t pretend to be a traditional news service. On its website, “The Rebel,” TheRebel.media, describes itself as “[t]he fearless source of news, opinion, and activism that you won't find anywhere else! …. Through a mix of online engagement, commenting, advocacy, and events, we don’t just report the news, we participate in it.”

Okay. But when I asked Levant about his team’s role in events in Berkeley, he responded: “We had no staff at either event.”

Southern, too, claims she became an "independent" journalist about a month before the Patriots Day event.

But the Rebel Media website says she still works there. Just like Gavin McInnes. He apparently wasn’t at Patriots Day himself. But his Proud Boys definitely were, and accompanied Southern.

Also, two days before Patriots Day, on April 13, Levant himself seems to have been in California, too. At least, Mike Cernovich, who lives in the state, tweeted, “Had coffee with @ezralevant, I have not been more impressed with someone in a long time. A true visionary. Big moves coming!”

Cernovich runs the conspiracy website, DangerandPlay.com. He was one of the main sources of the viral story last fall alleging that then Democratic Presidential nominee Hillary Clinton was at the center of a pedophile ring operating out of pizzeria in Northwestern Washington, DC. Donald Trump, Jr. recently tweeted that Cernovich should be nominated for a Pulitzer prize.

Congrats to @Cernovich for breaking the #SusanRice story. In a long gone time of unbiased journalism he'd win the Pulitzer, but not today!

One day before Patriots Day, on April 14, Cernovich was with McInnes — and the United States’, the world’s biggest conspiracy, fake news peddler — Alex Jones, on his show InfoWars.com. After some guy chit-chat about nuclear war with North Korea, Cernovich prompted Jones to ask McGinnis about the Patriot Day event.

McInnes said: “In Berkeley, Lauren Southern and a bunch of people are going down there to do a thing called Patriots Day. Nothing controversial, just people like Trump wanting to say they love free speech in America. And all these rodents, these Antifa kids were just spotted at Home Depot buying up wooden flagpoles because they want to extinguish all these people. But they are going to meet up with bikers, Oath Keepers, all these guys are there waiting for them. It’s going to be a riot.”

A few minutes later, McInnes boasted about “Friar Tuck,” one of his Proud Boys who’d be serving as bodyguards for Lauren Southern at the event. “Because he was a bouncer his whole life,” McInnes said, “he just murders people for fun.”

In a YouTube video publicizing Patriots Day, a spokesman said, “This event will be a free speech rally …. What we do not support is violence [and] intimidation.” But the event did turn violent. Twenty people were arrested, and eleven were injured. In a scene that went viral, the founder of a white supremacist group sucker-punched a woman from Antifa in the face.

On the April 17 episode of McInnes’ show on Rebel Media, the host called the melee, “Freedom’s biggest victory since Trump.” He showed the video of the white supremacist Nathan Damigo cold-cocking the Antifa member.

Towards the end of the segment, McInnes video linked in people who’d apparently actually been at the Patriots Day event, including Southern. She said, “There was attempted murder there going on the entire time — whether it be with rocks, bricks, bags (over people’s heads), or trying to curb stomp people.” A Proud Boy reported, “Everyone was calling out when rocks were coming in and M-80s....” McInnes asks Irma Hinojosa, a Latina for Trump, “Did Mike Cernovich send you money to buy rounds?” Yeah, basically,” she said. "He offered to pay for us to celebrate.”

In an ominous foreshadowing, the ultra-conservative Ann Coulter tweeted out McInnes' written declaration of victory on April 21.

Coulter, whom Levant accompanied on a tour through Canada in 2010, was scheduled to speak in Berkeley on Thursday, April 27. Last week, university officials canceled the event, citing safety concerns, offering to reschedule it for May 2. Coulter declined because that is so-called “Dead Week” at the school, the week before finals when no classes are held and few students are on campus.

On Monday, groups that invited her filed a lawsuit against the University. (Coulter’s advocates are supported by some free speech advocates on the U.S. left, such as former Democratic primary candidate Bernie Sanders and Bill Maher.) Coulter initially announced plans to come to Berkeley on the 27 and give her speech outdoors, before pulling out of the event on Wednesday due to the loss of support from conservative groups.

Before Coulter's cancellation, McInnes had announced that his Proud Boys group would surround her at all times. On Saturday, Proud Boys Canada announced the creation of a "military division," to be headed by Kyle Chapman, one of the organizers and promoters of the Berkeley Patriots Day event.

In the meantime, there’s a lot to fact check in what’s still smoldering. The National Observer has requested records from Berkeley police. We’re reviewing video. We’re interviewing all of the witnesses we can find.

We want to know — Is Southern’s, McInnes’ and Rebel Media's reporting accurate? Are Canadians working to support white nationalists in the United States? If so, why? And just because we’re curious — What is the status of both Lauren Southern and Gavin McInnes' visa/work permits in the United States? Are they being paid for their U.S. activities relating to Berkeley, and if so, what is the source of those funds?

Toward the end of Southern’s Patriots Day speech, a fan plopped a stars-and-stripes cowboy hat on her head. To the hoops and hollers of her fans, Southern wound toward her dramatic conclusion.

“We need to realize Trump is only a foot in the door,” she said. “If we are going to succeed at undoing the poisonous system the left has foisted on us, to beat the left, we must become like them—subversive, cunning and coordinated like never before….”

Excellent start ~ I would

Excellent start ~ I would REALLY like to KNOW who's footing the bill for Ezra Levant in general and his network beyond these vomitous "Proud Boy" cretins ~ are postMedia, CIBC, and Manulife behind this too the way they've been implicated in the KELLIE LEITCH campaign? …and are these same creeps funnelling funds into the CBC as well to keep promoting these quacks?

Thank you National Observer for covering the participation of the Rebel Media/propaganda machine. The inclusion of far right political activists like Lauren Southern and the 'Proud Boys' goon squad who were there for what certainly appears to me to be to incite division on campus and foment physical distractions that can be exploited for future political propaganda clips against Liberal democracy advocacy. Rebel appears to attract far right political donations that enable them to amplify ideology and values that are incompatible with traditional Canadian values of inclusivity, tolerance, respect. I hope that future reporting can uncover their major donors.