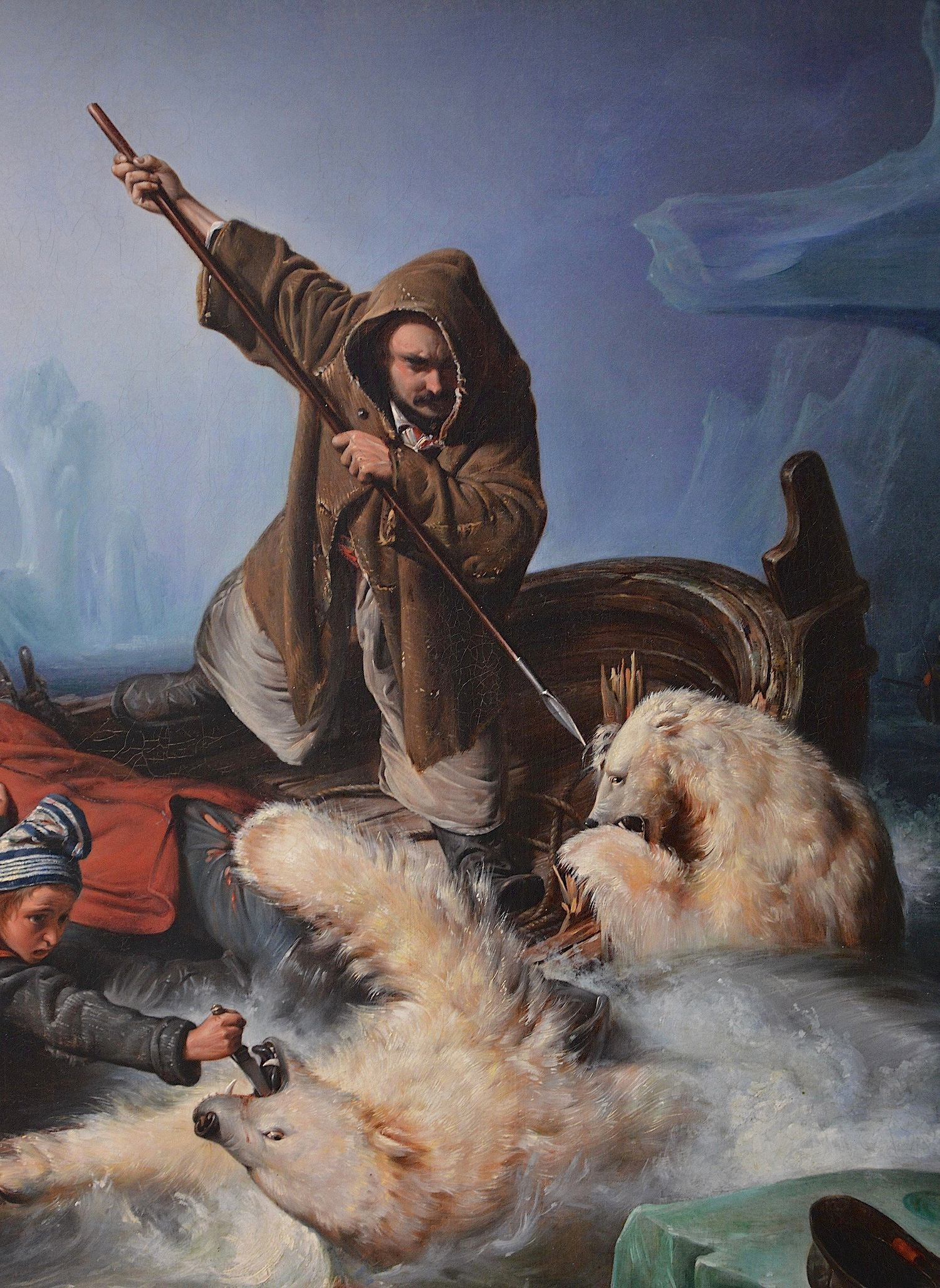 Concealed by the landscape, polar bears had an alleged preference for man-flesh. In fact, bears in conflict with boats were most often defending themselves. Fight with Polar Bears by Francois-Auguste Biard, 1839 (detail). Courtesy of Wikimedia Commons.
Previous story
Next story

Ice Bear: The Cultural History of an Arctic Icon by Michael Engelhard looks at the last few centuries through the lens of our relationship to polar bears. Its compelling images and peculiar anecdotes portray an insatiable species that monopolizes a precarious and magnificent world, for now. That’s the humans. The polar bears slip past on currents of their own integral splendor, providing readers with a glimpse, in author Michael Engelhard’s word, of “the sheer life force [they] add to the world.”

Engelhard, an Alaska wilderness guide, shows his hand by describing a rally at which Alaska Governor Sarah Palin denounced the listing of the polar bear as “threatened” under the US Endangered Species Act. Engelhard carried a sign which read, “Polar bears want babies, too. Stop our addiction to oil!”

For the remainder of the book, he steps aside and lets compelling images and snips of history tell the tale of human projection onto the bear’s white furry screen. Polar bears weave in and out of European culture as symbols of empire and personal status, mortal dangers and cuddlesome celebrities. They even become the apotheosis of cultural trends. For example, when bourgeois Victorians brought dogs into their houses and gave them names, this laid the groundwork for the personhood celebrity of Knut, a cub born in a Berlin zoo in 2006.

Here, I must digress. Perhaps the annual polar bear swim I host is just an excuse to spend hours on the web looking for the cutest pictures.

According to Engelhard, I’m not alone. Germans went crazy for Knut. The young star of Berlin’s zoo inspired ringtones, stuffies, DVDs, films and even a stamp. Annie Leibowitz photographed Knut for Vanity Fair. At one point, 30 per cent of Germans were sick and tired of hearing about Knut. For Engelhard, Knut reflects our yearning to see harmony between people and beasts restored – on our terms. Captivity infantilizes an animal, he notes, by depriving it of choices and making it dependent.

The eloquent pictures feed imaginative speculation. (I viewed the book in pdf form and couldn’t tell if it was a coffee table book due to its pictorial clout. It’s not, it’s an 8 by 10 paperback published by University of Washington press.). For example, could thinking that these are the things polar bears want...

...lead to future polar bears such as this?

I particularly enjoyed the complex give-and-take between polar bears and natives of the far North. Many First Nations saw the bears as formidable equals who, in stories, sometimes invited humans into their homes or pushed aside their muzzles to reveal a human face. Inuit of the eastern Baffin area believed the bear “understood when it was being ridiculed or belittled.” When hunted, strict conduct codes ensured that the polar bear spirits felt respected and would not return as a destructive force. Here again, Engelhard’s deep research provides manifold stories of an elaborate relationship.

In contrast, European explorers saw polar bears as ghastly, ghostly stalkers. Concealed by the landscape and with an alleged preference for man-flesh, they showed relentless stamina and unceasing curiosity. Their eerie whiteness inspired Herman Melville to weigh in on the “white shrouded bear”:

“[I]t is not the whiteness, separately regarded, which heightens the intolerable hideousness of that brute; for, analysed, that heightened hideousness, it might be said, only arises from the circumstance, that the irresponsible ferociousness of the creature stands invested in the fleece of celestial innocence and love; and hence, by bringing together two such opposite emotions in our minds, the Polar bear frightens us with so unnatural a contrast”.

He suggests that our endless attraction for these novel bears could arise from our similarities. A skinned bear looks somewhat human. Their back paws leave prints resembling those of our feet. They stand up to view the world with eyes aligned in a frontal plane. They have good visual acuity, a keen sense of smell, manual dexterity, and a broad variety of vocalizations. According to the Inuit, they have personalities and the ability to reason. They ceaselessly investigate their world, exploring both land and sea. Their babies are helpless, nearly hairless and pink. Mothers nurse while sitting up. Maternal bonds run deep. The bears like to slide, wrestle and play. Which is so cute.

John Muir’s description seems particularly apt: “They appeared to be very fat and prosperous, and very much at home, as if the country had belonged to them always. They are the unrivaled master- existences of this ice-bound solitude.” He also described a 1917 bear hunt in which five business magnates shot two bears forty times, capturing the plight of an undeserved reputation: the hunt was “as safe and as a butcher as shooting cows in a barnyard from the roof of the barn.”

Engelhard points out, “Despite the fact that deer kill more people than bears ever do (through car accidents), the White Bear personifies nature and a universe ultimately beyond our control…. The killing of one also has elements of a vendetta, of Old Testament, eye-for-an-eye revenge.” He ultimately sees the bear as a chance for humans to redeem ourselves, or at least face our shortcomings.

The Ice Bear entertains and edifies in its portrayal of our natural tendencies, in relation to another “master existence,” toward fear, acquisition and sentiment. Yet an interesting silence guides the reader’s gaze past the humans and toward the bears themselves, in their seemingly impossible world which has belonged to them always and for which we have made ourselves accountable.