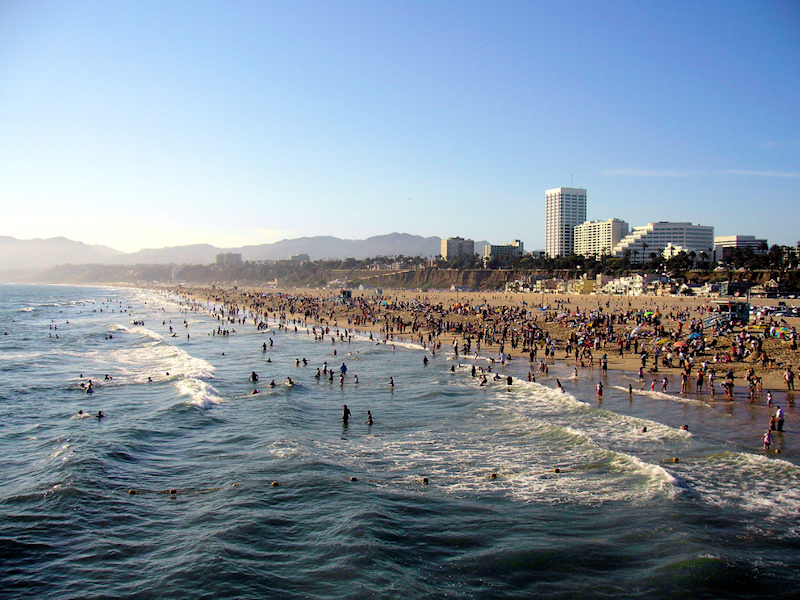 The beach at Santa Monica, where the author lives. Photo from Wikimedia, creative commons usage
Previous story
Next story

Even before Charlottesville, I had been wanting to write about racial hatred and how it's being acted out in right in my own community of Santa Monica, California in ways we have not seen in this country (and the world) for decades. I think we all know why. Or maybe we don't. But it's certainly getting very close to home in my world.

In Santa Monica, we have a group called the Committee for Racial Justice (aka CRJ) that was formed six years ago following a racial incident at the Santa Monica High School. Yes, Santa Monica, a wealthy beautiful privileged and somewhat diverse city, has race issues. But they mostly lie under the surface and are not dealt with head on. Thus the need for CRJ.

As an aside, the convening organization happens to be the United Methodist Church with which I am associated and which also is the fiscal agent for my own organization, Climate Action Santa Monica (CASM).

CRJ puts on a monthly workshop that is free and open to the public and that takes place in a meeting room at one of the City's branch libraries. Issues dealt with by the CRJ include things like the achievement gap in schools, police brutality, white privilege, etc. They usually bring in guests including experts, academics, the police chief, for example.

July's workshop was, in fact, on white privilege. Shortly after the meeting begin, several masked white supremacists entered the room and started disrupting the meeting. In six years, CRJ hasn't experienced a single problem and were totally unprepared as to how to handle the situation. It was ugly. One group that participated is called the Red Elephants.

A week later another group of white supremacists did the same thing at a meeting of the Santa Monica Democratic Club. These ones did not wear masks, however.

Most recently, a week ago Sunday, CRJ had its August workshop. By the time a friend and I arrived there was a demonstration by white supremacists well underway and a counter demonstration by some members of the community as a way to bear witness. The police were arriving in droves. Lots of screaming and yelling and people documenting it with their phones.

When we arrived we were initially not let in but were eventually spotted by someone who know us and let us in at another door which was heavily guarded by the police.

By the way, CRJ was told it could not bar people from coming to the workshop as CRJ is given free rent by the city which comes with a caveat that everyone is welcome. However, that instruction was somehow ignored by both the building manager and the police. I don't know what would have happened if they had all just been let into the room but I'm sure it would have been a no win situation.

Despite the police blocking the door, a group of the white supremacists busted through the door guarded by the police and got into the meeting room. The meeting had already started in spite of all the noise but now the real disruption began. I was in the back of the room in utter disbelief.

The pastor and a couple people started singing We Shall Overcome and everyone joined in and then got into a circle. The singing resulted in neutralizing the energy when a discussion was initiated as to whether to continue the meeting or not. There were children on site and some felt it was not safe; however, the majority voted to continue the meeting. The guest speaker interestingly enough was from the Simon Weisenthal Central and gave a primer on the genesis and history of hate groups.

We have already been told that 50 Nazis and 300 aligned supremacists will be showing up at next month's meeting. Meetings are going right now to figure out how to handle it. There have been No weapons to date but who knows about the future.

I would like to know the following... Is anyone else having experiences like these in their communities? Is there a right and safe way to hold these kinds of meetings/workshops when being targeted by extremists?

I've certainly been upset by rallies in the South around Confederate monuments and flags, but I am still in disbelief about this kind of behavior in my hometown far away from Confederate turf. The fact I'm even using that term bothers me.We've all heard it said that he South is still fighting the Civil War. It more than ever appears true but it's not just the South.

What I've learned in the last month is that these extremist groups have been ridiculously emboldened by Trump (we all already knew that.) They are amazingly well-organized. They will put out a call to go to get their own to attend a particular event and they will drive for hours to get there.

I doubt any of the extremists are from Santa Monica. It's just shocking to me that this is really happening and I thought your readers in Canada might be interested to know that even in the most unexpected places, this is happening.

You're surprised that young

You're surprised that young people live in your community? Oh! I get it. You don't realise that EVERY YOUNG PERSON on the entire planet is susceptible to fake moral outrage perpetrated by right wing nuts over social media. I hope you realise it soon. We are in for a rough ride. The young empower the lunatics, as they have in every world war and probably every war.