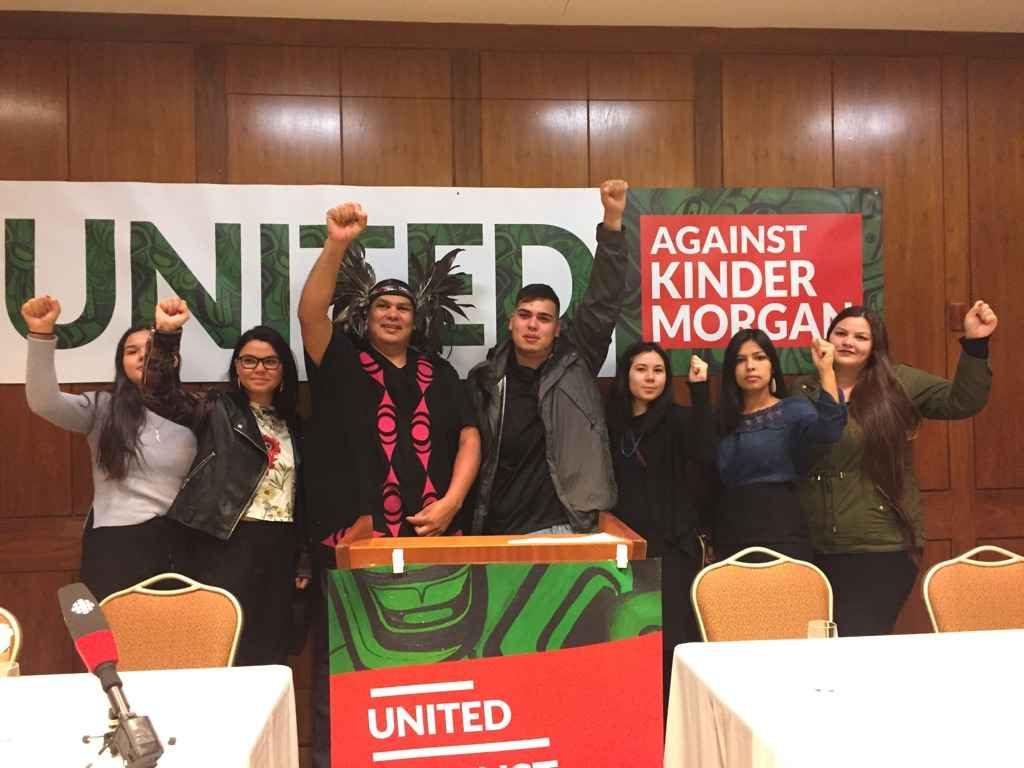 The federal government was already building a website announcing approval of the Kinder Morgan pipeline expansion when it "consulted" with First Nations in November 2016, according to lawyers at the opening day of a court challenge in Vancouver.

"We had no choice but to go to court," Coldwater Indian Band Chief Lee Spahan told a news conference in downtown Vancouver about the proposed Trans Mountain Kinder Morgan pipeline expansion.

The legal challenge, which includes seven First Nations, the City of Vancouver and Burnaby, as well as two environmental groups, is seen as a major legal test for an oil pipeline project that has the support of the federal and Alberta governments, but has been met with fierce opposition in British Columbia.

The B.C. and Alberta governments both have status as intervenors in the case. If built, the project would triple the capacity of the existing pipeline, allowing it to transport up to 890,000 barrels of diluted bitumen per day from Alberta to Burnaby, B.C..

Standing in front of a large green and white banner with the words "United against Kinder Morgan," Indigenous representatives spoke to reporters, saying that the Texas-based oil giant didn't properly consult First Nations about their proposal.

"Our efforts may be seen as a nuisance," Tsleil-Waututh First Nation Chief Maureen Thomas said, her voice heavy with emotion. "But I see it as survival for our future generations."

The Federal Court of Appeal in Vancouver began hearing arguments on Monday from 10 applicants challenging Ottawa's approval of the Trans Mountain pipeline expansion.

Lawyers for the Tsleil-Waututh, Coldwater, and the Upper Nicola band argued that First Nations consultations weren't done in earnest because the government was already preparing to give the green light, even as discussions were underway.

“Canada was preparing a website to announce the approval of the project plan, while at the same time were still undertaking consultation with First Nations," Tsleil-Waututh counsel Scott Andrew Smith argued in court.

"It has been found that no alternative version of the site was being prepared. [On] November 29th, a mere day after Minister Carr promised Chief Thomas that Tsleil-Waututh’s submissions would be taken into account by the cabinet and his colleagues, the pre-prepared website was published. The Governor in Council did not consider or take Tsleil-Waututh’s final considerations into account, and proceeded with consultations with a mind that was already made up.”

Lawyers also pointed to the exclusion of marine shipping concerns from the National Energy Board's report, the alleged failure to address this error, and Canada's alleged breach of duty to consult First Nations and obtain consent.

In an email response on October 4, Natural Resources Canada spokeswoman Jocelyn Argibay said in response to the allegations:

The Government of Canada has set aside $64.7 million to fund the Indigenous Advisory and Monitoring Committee (IAMC) that will help make sure the conditions associated with the project are met and to fund compliance, monitoring, and environmental studies."

Environmental groups strongly opposed the pipeline on the basis of climate and environmental impacts. The expanded pipeline would increase the current number of oil tankers into Burrard Inlet, which scientists argue will be a major risk to whales and marine wildlife on the coast.

Karen Wristen, executive director of the Living Oceans Society, said she was especially disturbed by news that Kinder Morgan has been putting anti-spawning mats across rivers to prevent salmon from spawning near the pipeline route:

"We learned this week that the lack of protection has become even more concerning — spawning deterrent mats have been placed in advance of construction, before it's been approved." she said.

A Kinder Morgan spokeswoman, Ali Hounsell, told The Canadian Press last week that the spawning deterrents were considered a "preventative measure" to minimize environmental impacts of constructing the pipeline. The National Energy Board has since issued an order for the company to stop unauthorized construction activities.

Around noon, Indigenous and environmental leaders spoke outside the courthouse to oppose the pipeline.

"We know when push comes to shove we will be on the front lines standing in solidarity, protecting our children and grandchildren," Grand Chief Stewart Philip said. "We will get arrested if that’s what it takes."

"The exceptional support from the cities of Victoria, Vancouver, and Burnaby, show the deep commitment we all share to protecting and defending our natural values," he said in a later interview with National Observer.

"Indigenous people are not standing alone. In every sense of the word, we are standing together. The fact that we can successfully stand up to both a large scale corporation and the Canadian government, is powerful. I’m convinced our cause will prevail. Otherwise, there will be mass unrest and we are prepared to do whatever we have to."

The Government of Canada will respond in court on Oct. 12 and 13 next week. The Province of Alberta and the federal National Energy Board will present their cases on Oct. 13th.

Update October 4, 8:15 a.m.: a response from Natural Resources Canada was included in the article.