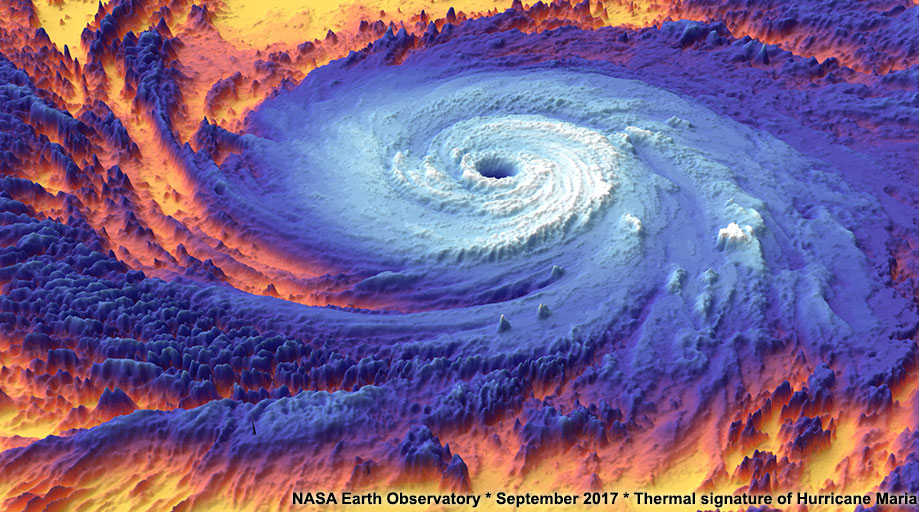 Hurricane Irma, the monstrous Category 5 superstorm packing 297 km/h winds, went on a record-breaking rampage through the Caribbean and Florida. Its accumulated energy exceeded all last year's hurricanes combined. Photos of flattened towns and of forests de-leafed, de-barked and snapped like matchsticks give a visceral sense of the amount of energy unleashed.

Several articles I've read explain how the extra energy from global warming is supercharging these superstorms. That topic seems well known and well covered these days.

What intrigued me about Irma was a different but related question: how does the ferocious energy of Hurricane Irma measure up to the energy that global warming is adding to our climate?

So I cracked open a new spreadsheet, dug into dozens of documents and built a chart to illustrate how these two energy giants compare. Here's what I found out...

I decided to show the energy released by exploding an atomic bomb as a starting point.

Why an atomic bomb?

Because in a 2012 TED talk, that's been viewed more than a million times, climate scientist Dr. James Hansen compares global warming to the “equivalent of exploding 400,000 Hiroshima atomic bombs per day 365 days per year. That’s how much extra energy Earth is gaining each day.”

So, I'm going to start my chart off with a first column showing the energy from one atomic bomb explosion. It's a barely visible bar at the energy scales we will be dealing with.

For energy nerds, like myself, I've noted that it is roughly 63 trillion joules (Terajoules or "TJ").

Next let's add Hurricane Irma. The energy in Irma's winds was calculated by hurricane expert Dr. Kerry Emanuel of MIT, at 7 trillion joules per second (TJ/s).

Since few of us understand energy numbers on that scale, Dr. Emanuel gave an analogy: Irma's wind energy over the storm's lifetime was more than all the bombs dropped in World War II.

For my chart I decided to show just one minute's worth of Irma's winds. That equals the energy of seven atomic bomb explosions — every minute.

Indeed, photos of the areas hit hardest by Irma certainly look like they were flattened by gigantic bomb blasts.

NASA calls hurricanes the "The Greatest Storms on Earth" for good reason.

Before getting to the main act — global warming — I thought it would be enlightening to include its primary cause: fossil fuel burning.

So I turned to the latest estimates of global energy use from the U.S. Energy Information Agency.

The third column in my chart shows what I found: seven and a half billion humans are currently producing and consuming around 1,150 TJ of energy, every minute.

Of that, a whopping 85 per cent comes from burning fossil fuels. We have a growing climate crisis because when humanity wants more energy we almost always choose to burn even more fossil carbon, instead of installing clean alternatives.

Now, let’s get into global warming.

My final column shows how much energy our Earth's climate is gaining from global warming, every minute.

And fossil fuel pollution is responsible for nearly three-quarters of it (brown bar). The rest is caused by land use changes like deforestation and agriculture.

Choose your favorite analogy. Global warming is pumping energy into our climate at the rate of:

However you slice it, it's a crazy-huge amount of energy.

A final interesting comparison is between the heat we want from fossil fuels vs the heat we don't.

To illustrate, here's a version of the chart with everything else faded out.

The short brown bar shows that humans burn fossil fuels to produce ~1,000 TJ/minute of heat that we want. We use that heat to do things like move our vehicles, heat our buildings and generate electricity.

Compare that to the tall brown bar in the global warming column. Once we are done with fossil fuels their pollution (mainly CO2) sticks around and currently produces ~10,000 TJ/minute in additional heat that we don't want. That's ten times more than the heat we do want.

We don't want all that global warming heat because it is supercharging droughts, floods, storms, wildfires, sea levels and heat waves. Plus, it's causing general ecological havoc by shifting climate zones faster than many plants and animals can keep up.

The CO2 molecules released when we burn fossil oil, coal and gas act like zombie heat pumps -- continually trapping bits of heat energy that would otherwise have escaped into space.

These zombie heat pumps stick around in our air for centuries. And we've managed to release a daunting horde of them. Since 1960, for example, we've added 2,000 trillion molecules of CO2 to every cubic centimeter of our air. Two thousand trillion in each pea-sized bit of air.

In 2016 we stuffed a record-breaking 60 trillion more into each cubic centimeter.

With numbers like that, it is easy to see how global warming has grown into a towering Goliath dwarfing even the most terrifying energy giants.