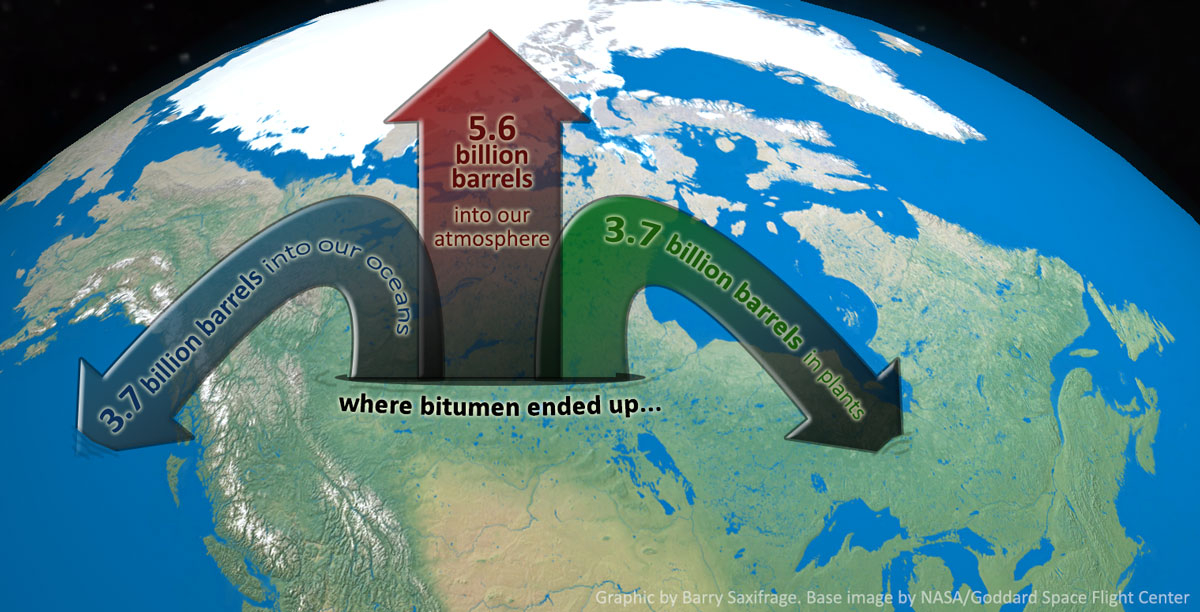 Where the pollution from Alberta's 12 billion barrels of bitumen has ended up. IPCC data. Background image by NASA/Goddard. Chart by Barry Saxifrage
Previous story
Next story

Lost in the heated arguments over Kinder Morgan's proposed Trans Mountain pipeline is this simple fact: more than a quarter of the bitumen flowing through it will end up as pollution spilling into our oceans — one way or the other.

All the bitumen that doesn't spill from pipelines or tankers gets burned, ending up as carbon pollution dumped into our environment. Over one quarter ends up in the oceans, acidifying them for millennia to come.

Where did it all go?

According to the International Panel on Climate Change (IPCC), about 28 per cent of all burned fossil carbon has ended up in our oceans causing them to acidify rapidly.4 Known impacts of "ocean acidification" include killing coral reefs; dissolving baby oysters, scallops and other shellfish; and scrambling marine food chains.

Over three billion barrels worth of Alberta bitumen (~1.75 GtCO2) has now entered the world's oceans.

The percentage of all that ocean pollution which humans have cleaned up? Zero. And the resulting ocean acidification will persist for tens of thousands of years — many times longer than human civilization has existed.

Another 48 per cent of burned fossil carbon stays in our atmosphere. It thickens the heat-trapping blanket around the planet, increasing the heat and energy in our weather systems via global warming. That’s why we’re getting rising seas and heatwaves, fiercer storms and droughts, surging wildfires and floods, and widespread ecological damage.

So far, over five billion barrels worth of bitumen (~2.7 GtCO2) have been dumped into our air. None of that has been cleaned up either.

More than a quarter of the bitumen flowing through Kinder Morgan's Trans Mountain pipeline will end up as pollution spilling into our oceans — one way or the other.

Double the 'spills' with Trans Mountain

Kinder Morgan's new pipeline aims to pump as much new bitumen as Alberta has extracted in the entire history of the oil sands.

The pipeline is designed to pump 890,000 barrels a day. Over a forty year operational lifespan that adds up to 13 billion barrels. (Note that the original Trans Mountain pipeline is still pumping after 65 years.)

One way or the other, bitumen, like other fossil fuels, will pollute our oceans. Whether this fossil carbon gets spilled in liquid, solid or gaseous form, it will cause lasting damage to marine life, to coral reefs, to fisheries and to the people who cherish and depend on our oceans.

There is no scenario in which bitumen doesn't "spill" into our oceans causing harm. And there is no proposal to clean up any of the billions of tonnes of acidifying pollution that will end up there.

Editor's note: This article has been updated with a new headline to clarify that the bitumen that wound up in the oceans was absorbed as carbon pollution.

Americans pull ahead of Canadians in the race against climate change

This is misleading. It is

This is misleading. It is not bitumen that is spilled.

Please read this informative article with a focus on the big picture. One cannot take every word used so descriptively as literal. The issue is that, in whatever form or other, the gunk that is removed from under the land in northern Alberta ends up somewhere where it destroys the planet!

Canadians must act to leave

Canadians must act to leave the bitumen in the hole in Northern Alberta where god put it to keep it away from people who care less about the environment than Albertans.

Just brilliant Barry, an amazing analysis I had honestly never considered. There's no Alberta wine available in the liquor store, it's all been spilled.

This article's headline comes close to being clickbait and dwells on the trivial in explaining where the bitumen "goes." A somewhat more substantial contribution is the chart showing that, over 40 years of the pipeline, and presumably assuming it is utilized at 100% capacity, as much bitumen will be transported as the tar sands have delivered to the planet so far.

This is a little puzzling (would need substantiation) because what would go through this TMP is of course not the whole picture -- there's also Keystone, Line 3, rail transport, etc. -- while the historical quantity presumably reflects the total amount of production. So it's apples and oranges but the real comparison is even worse.

I have not seen substantiation of the claim -- forever made by the PM -- that Alberta can raise its bitumen extraction to the now legislated cap AND Canada can meet its Paris commitments, weak as they are. If anyone has seen such proof, I'd appreciate learning about it.