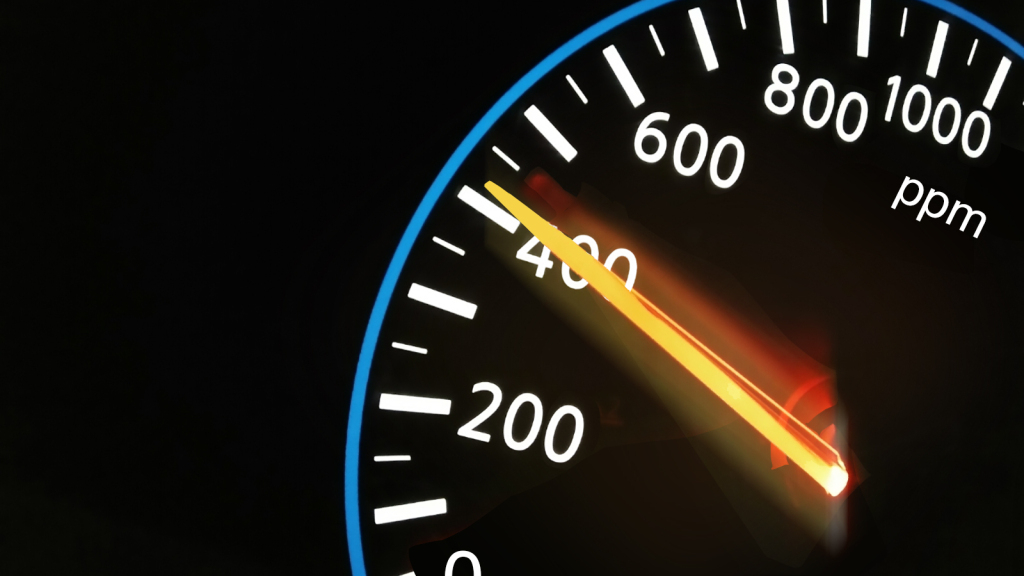 The last time atmospheric carbon dioxide levels were this high, millions of years ago, the planet was very different. For one, humans didn’t exist.

On Wednesday, scientists at the University of California in San Diego confirmed that April’s monthly average atmospheric carbon dioxide concentration breached 410 parts per million for the first time in our history.

We know a lot about how to track these changes. The Earth’s carbon dioxide levels peak around this time every year for a pretty straightforward reason. There’s more landmass in the northern hemisphere, and plants grow in a seasonal cycle. During the summer, they suck down CO2, during the winter, they let it back out. The measurements were made at Mauna Loa, Hawaii — a site chosen for its pristine location far away from the polluting influence of a major city.

Increasingly though, pollution from the world’s cities is making its way to Mauna Loa — and everywhere else on Earth.

In little more than a century of frenzied fossil-fuel burning, we humans have altered our planet’s atmosphere at a rate dozens of times faster than natural climate change. Carbon dioxide is now more than 100 ppm higher than any direct measurements from Antarctic ice cores over the past 800,000 years, and probably significantly higher than anything the planet has experienced for at least 15 million years. That includes eras when Earth was largely ice-free.

Not only are carbon dioxide levels rising each year, they are accelerating. Carbon dioxide is climbing at twice the pace it was 50 years ago. Even the increases are increasing.

That’s happening for several reasons, most important of which is that we’re still burning a larger amount of fossil fuels each year. Last year, humanity emitted the highest level of greenhouse gas emissions in history — even after factoring in the expansion of renewable energy. At the same time, the world’s most important carbon sinks — our forests — are dying, and therefore losing their ability to pull carbon dioxide out of the air and store it safely in the soil. The combination of these effects means we are losing ground, and fast.

Without a bold shift in our actions, in 30 years atmospheric carbon dioxide will return back to levels last reached just after the extinction of the dinosaurs, more than 50 million years ago. At that point, it might be too late to prevent permanent, dangerous feedback loops from kicking in.

This is the biggest problem humanity has ever faced, and we’ve barely even begun to address it effectively. On our current pace, factoring in current climate policies of every nation on Earth, the best independent analyses show that we are on course for warming of about 3.4 degrees Celsius above pre-industrial levels, enough to extinguish entire ecosystems and destabilize human civilization.

Climate change demands the urgent attention and cooperation of every government around the world. But even though most countries have acknowledged the danger, the ability to limit our emissions eludes us. After 23 years of United Nations summits on climate change, the time has come for radical thinking and radical action — a social movement with the power to demand a better future.

Of the two dozen or so official UN scenarios that show humanity curbing global warming to the goals agreed to in the 2015 Paris Accord, not one show success without the equivalent of a technological miracle. It’s easier to imagine outlandish technologies, like carbon capture, geoengineering, or fusion power than self-control.

Our failed approach to climate change is mostly a failure of imagination. We are not fated to this path. We can do better. Yes, there are some truly colossal headwinds, but we still control our future. Forgetting that fact is sure to doom us all.

Simply put, There is no

Simply put, There is no concrete plan to move ahead. It is all talk and no action.
I see very little in the way of education, what can I do etc. Governments and we as part of the human race continue on like nothing has changed.

Time to take politics out of the equation and get down to business.

Everywhere, I see signs that

Everywhere, I see signs that people are waking up. What I want to see more of, is the courage to speak, and to act publically, on what we know. All those raised beds are wonderful, but they won't stop the rise in CO2 which is drastically changing weather patterns, unless more of us demand real action.

The carbon levies, where they exist, are too low. The oil and gas subsidies haven't been phased out, though in Paris a lot of expensive suits said they would be. There aren't enough rebates for solarizing and electrifying the grid. And too many of us persist in thinking that lower taxes and less government spending are going to save us.

So many exciting things to do....business as usual isn't one of them.

The developed western world is governed by politicians. Politicians, with the odd rare exception, cannot see past the next election. They are incapable of making long term decisions. The reduction and/or control of atmospheric carbon dioxide will require a fundamental change in the way we live. It will require all of us to give up something, to sacrifice some creature comforts, to change employment, to pay more taxes. But most of all it will require real leadership. This is what I don't see - courageous leaders who have their eye on the future of mankind, not the polls or the next election. Perhaps democratically elected governments, by their very nature, are incapable of solving long range problems.