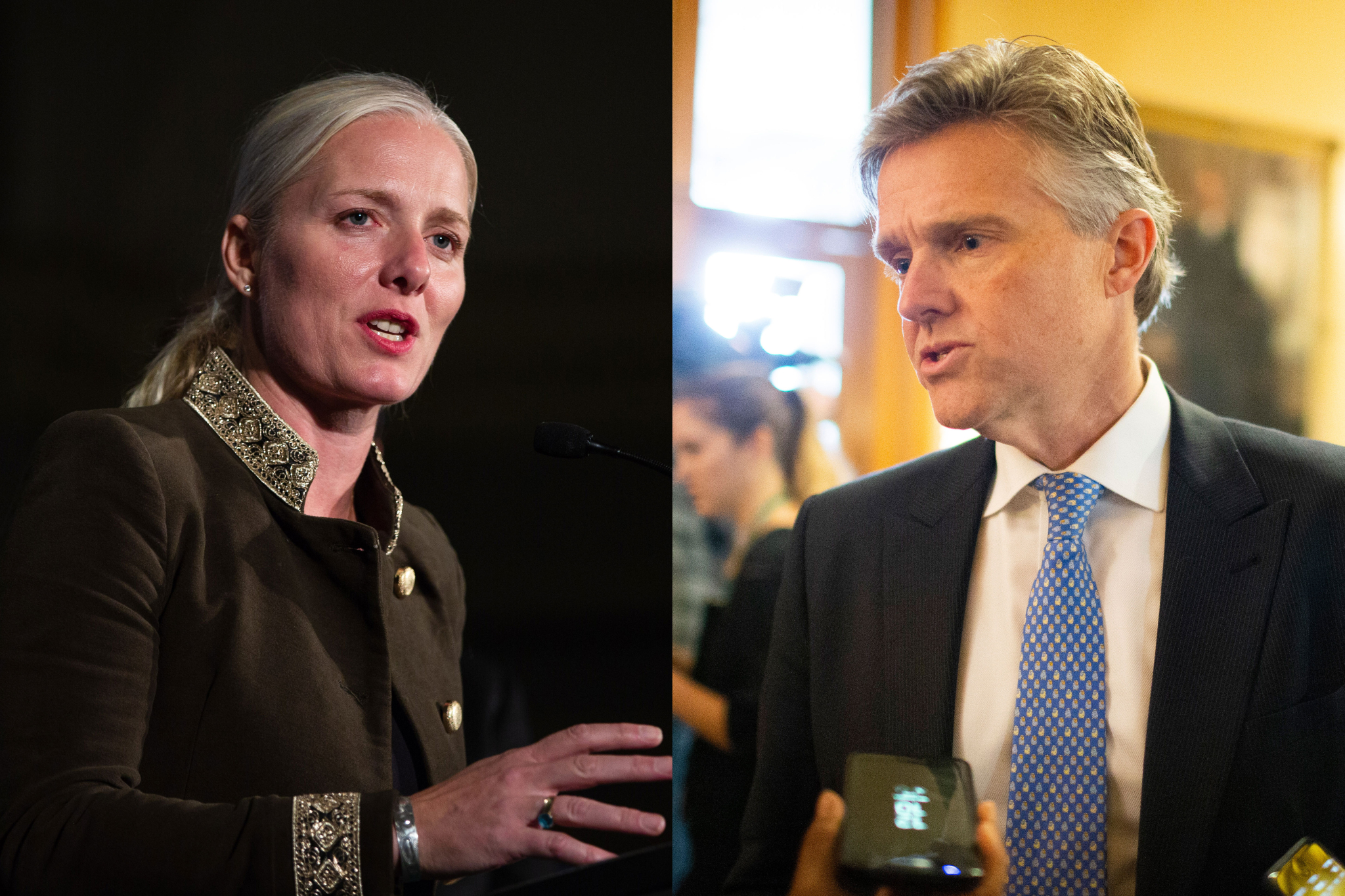 Ontario Environment Minister Rod Phillips says the only thing you need to know about his relationship with his federal counterpart Catherine McKenna is that her office spelled his name wrong in an official letter sent to his office.

In a letter to "the Honorable Rob Phillips" Thursday, McKenna signaled the federal government is circumventing Ontario's decision to cancel its cap and trade program and all associated climate policies. Phillips shared the letter with reporters hours after McKenna announced at an insulation plant in Milton, Ont., that the federal government would distribute $420 million for Ontario from the 'Low Carbon Economy Fund' directly to cities, hospitals, universities, schools, and businesses for energy efficiency programs and other measures to reduce greenhouse gas emissions.

Today, in response to the Ontario government's cancellation of their climate plan, we're announcing the federal government's intention to directly support climate action in Ontario — using the province's allocation of the #LowCarbon Economy Fund. pic.twitter.com/1Fmws16FIJ

Phillips said McKenna's intervention would "circumvent the province and the people of the province," without explaining how specifically it would do that. Under McKenna's proposal, money that would have gone to the provincial government, if it put a price on carbon, will now go directly to pay for projects such as building retrofits for social housing and solar panels at schools.

He said several provincial environment ministers had expressed a desire to discuss the federal carbon pricing plan at a long-scheduled Nov. 23 environment ministers meeting. That meeting, he said, has been downgraded to a video conference due to "legislative commitments by a number of ministers" that makes travel to Ottawa difficult.

"You've got a minister who doesn't know the name of her provincial counterparts, you've got a (federal carbon) program that is not effective and you've got a government who refuses to meet face to face about a difficult issue," Phillips told reporters. "Its very distressing."

Phillips and McKenna have met only once. That was in July after he was sworn in as minister. Since then they have sparred on Twitter and through the media about climate policies.

The environment ministers' meeting is "too important to do over the phone," he added, noting that there were more environmental issues to discuss like plastics and species at risk. "If this is the most important issue of our times, don't we all think we can take a Friday and sit down and talk about it? But apparently not, if you disagree."

In an interview with National Observer, McKenna confirmed that there were environmental ministers "out West" who were unable to come in person. She said she was "happy to meet" with any of her provincial counterparts, but had received no formal request for a meeting from Phillips.

"Quite frankly, I don’t know how to respond (to his comments)," she said.

Phillips said that Ontario and federal environment officials had in the last two weeks discussed the low carbon fund agreement signed in May 2018 by provinces and territories signed on to the Pan-Canadian Framework on Clean Growth and Climate Change, which commits them to reducing greenhouse gas emissions in order to meet Canada's Paris Agreement targets.

The agreement provides $1.4 billion for investment in climate action in provinces and territories, with a priority on energy efficiency. To date it has supported projects like Nova Scotia's energy rebate program, a Northwest Territories' program to regenerate forests and a retrofit program in British Columbia.

In her letter, McKenna said the low carbon fund was supporting seven programs in Ontario that help individuals, small and medium enterprise, industries, universities and colleges, farmers, and Indigenous communities. Since Ontario canceled its climate policies last week, the funding agreement can no longer be upheld, she wrote, and has thus been terminated.

Phillips could not answer specific questions about what programs the low carbon fund was aiding and how the federal government's financial impact will take precedence over Ontario's cancellation policies. He told reporters to ask McKenna about it because "we just got (the letter) and it's addressed to the wrong person."

Programs in the province that had been slated for funding through the program include $100 million in school retrofits for energy efficiency, $64 million for hospitals to do the same, as well as electric bus programs in Hamilton and Brampton and hydrogen busses in Mississauga, said McKenna.

In his remark to reporters at Queen's Park, Phillips focused on the way the announcement was made by McKenna, noting that it appeared Prime Minister Justin Trudeau and McKenna "have decided they don't want to deal with the Ontario government," because they disagree with their carbon tax plan.

"She's unilaterally walking away," Phillips said. "This is from a prime minister that promised a new era of relations between provinces and the federal government, and since August we've been trying to have a conversation, a conversation about targets, a conversation about a plan...but she now only communicates by email and, frankly, not very effectively."

McKenna reiterated her hope to work with the provincial government on tackling climate change issues, "but Mr. Ford has taken a different path." Over the summer, she told National Observer she had met with many of the institutions that had their funding terminated by the Ford government and suffered damages due to extreme weather events. Helping them, she said, "was a huge opportunity to act."

"We would’ve like to be working with the Ford government," she said, but they had taken an aggressive stance. "At a certain point we need political action...To work with a partner you need a partner who has a climate plan and is committed to climate action."

Ford government has left 'a vacuum'

The Ontario government's cancellation of the province's climate policies has left "a vacuum" in the province that has been begging for leadership, John Fraser, interim leader of the Ontario Liberals, told reporters after Phillips' remarks.

"It's a two-way street," Fraser said. "You can't literally declare war on someone and then at the same time say let's sit down and talk about something else. It's a passive aggressive approach."

“Doug Ford chose Trudeau's carbon tax instead of a made-in-Ontario plan for reducing carbon,” said Tabuns. “And by also choosing to have no climate change or environmental plan at all, Ford handed control of Ontario money over to Ottawa. It’s a shame, and it’s not right for Ontario.”

Mike Schreiner, Ontario Green Party leader and MPP, said he was "pleased" with McKenna's announcement, and asked the Ontario government in a statement to "start working constructively with Ottawa to put people and planet first."

"In just a few months, the Conservatives have canceled every low-cost, market-friendly solution for reducing pollution. To make matters worse, they won’t even tell us how the remaining cap-and-trade revenue will be spent. And it's outrageous that their public consultation explicitly prohibits any discussion of pollution pricing," Schreiner said in the statement. "It’s no wonder the federal government doesn’t trust Ford with climate funding."

McKenna's announcement today was welcomed by other groups too.

"The lack of a hospitable renewable energy and sustainability policy in Ontario right now is driving groups in those industries out of the province," said Janice Ashworth, general manager of Ottawa Renewable Energy Co-operative (OREC) in an email. "By remaining true to its commitments laid out in the Pan Canadian Framework, the federal government is providing some policy stability for the sector."

Ashworth added that the federal support for low carbon initiatives, including renewable energy projects taken on by groups like OREC, will create local jobs and stimulate the local economy.

"This is good news for maintaining the momentum on greening Ontario's economy," said Keith Stewart, senior energy strategist at Greenpeace Canada, in an email to National Observer. "Just like the communities dealing with Trump south of the borders, Ontarians are going to have to find creative ways to work around a Premier who can't or won't recognize the urgency of the climate crisis."

"If the government of Ontario abandons its responsibilities then we expect other levels of government to step into fill that gap," Stewart added.

A public consultation on Ontario's new climate plan is open until November 16.

Perhaps changing the Rod to

Perhaps changing the Rod to Rob was a Freudian slip - signalling the Federal governmen'ts belief that Mr. Phillips and his caucus are, in fact "robbing" Ontario of the opportunity to move forward with a new, sustainable economy. Their total silence on how they will address the entire scope of environmental issues facing us is cetainly a form of deception, if not outright robbery.

I was also thinking Freudian

I was also thinking Freudian slip, but more of a subliminal reference to Doug Ford's late brother, Rob.

a government who refuses to

a government who refuses to meet face to face about a difficult issue," Phillips told reporters. "Its very distressing."

But he's not distressed about the prospect facing his descendants on a planet losing its wildlife (biodiversity) and its capacity to resist overheating and the eventual destruction of its biosphere.

What do Rod Philipps and

What do Rod Philipps and Donald Trump have in common? Passive, aggressive, manipulative. Wake up Rod, we want to save Earth from extinction. What's your plan? Honestly, tell me what you think about climate change and our future. Stop fucking around with your childish antics. You know that science proves human activity is 100% responsible for climate change and extinction. What are you waiting for?