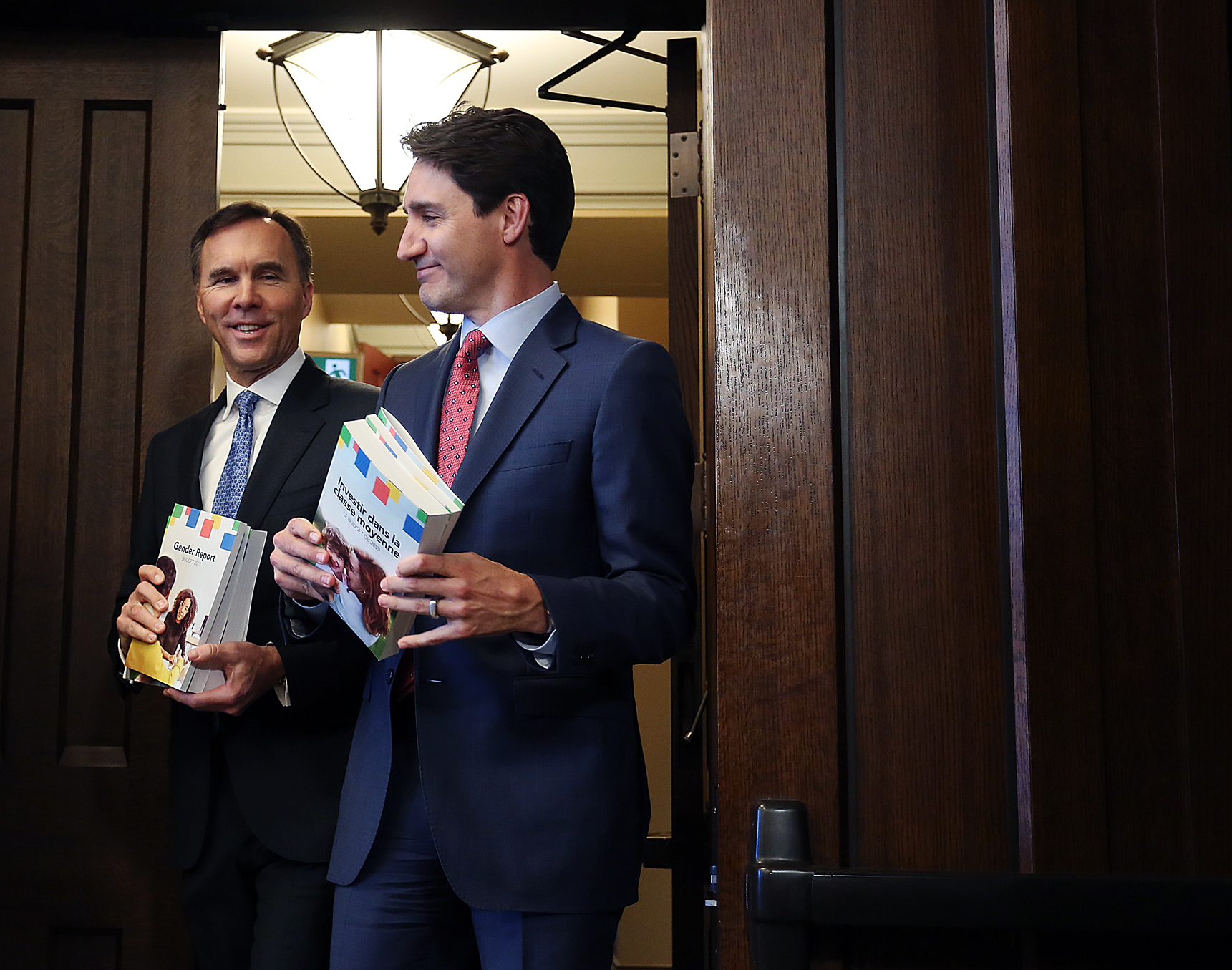 Finance Minister Bill Morneau’s last federal budget before the 2019 election shows that the Trudeau government’s deficit is about $3 billion lower than anticipated for the 2018-2019 fiscal year, but there are no signs of balancing Canada’s books in the coming years.

This breaks a promise made by Prime Minister Justin Trudeau’s Liberals in the 2015 election campaign, but Morneau said that the government’s spending choices have ensured that Canadian households are better off than they were four years ago, when the country was in a recession.

“I think the most important promise that we made to Canadians is that we would invest in their future,” he told reporters at a news conference in Ottawa.

He said any cuts to federal spending, proposed by both the New Democrats and the Conservatives in the last election campaign, would result in cuts and challenges for middle class families, but he argued that the plan proposed in the budget creates new opportunities for these households.

Here are some other highlights in the 460-page budget tabled in the House of Commons:

The federal government is proposing to take the first steps towards a “just transition” plan for workers in the coal industry that will be out of work under the government’s commitment to phase out coal power plants by 2030.

Morneau said details would soon follow regarding recent recommendations to improve employment insurance benefits and training for works in transition. For now, his plan would offer $150 million over four years for an infrastructure fund to be spent in Western and Atlantic Canada, with most of the money going to the west, which has a larger number of coal industry jobs.

The government is proposing to help subsidize the cost of buying an electric car by up to $5,000, but has declined to establish a more stringent sales mandate, opting instead for voluntary targets.

The government is proposing new measures to help households buy homes and pay for medication, through a new incentive that offers support for first-time home buyers and an increase in the maximum withdrawal allowed from a home buyer’s Registered Retirement Savings Plan for a downpayment, from $25,000 to $35,000.

On a proposed pharmacare system, the government is proposing to introduce modest funding of $35 million over four years to create a new drug agency to make drugs more affordable, as well as a $1 billion investment over two years to help Canadians with rare diseases get access to new drugs.

Today we’re building on the same plan Canadians chose in 2015, by investing in the middle class and making sure you have the support you need, when and where you need it. Stay tuned. #YourBudget2019. pic.twitter.com/t3CLOTZfz3

To improve Canada’s democracy, the government has established some new criteria for its proposed support of Canadian journalism.

This includes establishing rules to define who would qualify as a journalist, for the purposes of issuing a 25 per cent refundable tax credit to media outlets for employees.

This would include someone who works at least 26 hours a week for a minimum of 40 weeks in the year, and who spends at least 75 per cent of their time doing research, collecting information, checking facts, taking pictures, writing, editing, designing or providing content.

The maximum tax credit for each eligible employee would be $13,750

The government also says that media outlets that would qualify for this must meet specific criteria to qualify for the new benefits. This includes requiring eligible media outlets to have at least two journalists who are primarily focused on topics of general interest and current events, including coverage of democratic institutions, as opposed to speciality coverage in a specific industry. Sports, recreation, arts, lifestyle or entertainment publications would not qualify.

The rules would also require allow eligible non-profit media outlets to issue tax receipts to donors, provided that they provide the government with names of donors that give more than $5,000 in a year in a list that would be made public. The rules would also prohibit any single donor from providing more than 20 per cent of the funding of a media organization unless the government agrees to make an exception.

News junkies would also be able to get a temporary tax credit worth 15 per cent of the cost of annual digital subscriptions up to a maximum $75 credit for the year. This would only be valid for subscriptions taken after 2019 and before 2025. At current rates, this would mean a $21.00 refund for National Observer readers who take out an annual subscription at the full price.

The government plans to invest more than $1 billion over five years to tackle increasing pressure on Canada’s borders as thousands of asylum seekers cross the border to flee President Donald Trump’s United States to seek protection in the north. New federal spending would also seek to tackle racism and through a new secretariat to be established to fight the spread of hate in Canada.

Canada’s federal government plans to spend $4.5 billion over five years to improve the living conditions of Indigenous communities and advance self-determination and self-governance, as Justin Trudeau’s Liberal government seeks to renew its claim as an honest broker and trusted partner in reconciliation efforts.

That includes proposed funding of $938 million in the 2019-20 fiscal year (and $1.4 billion over seven years) to forgive all outstanding comprehensive claim negotiation loans and to reimburse Indigenous governments that have already repaid these loans, it said in its 2019 budget released on Tuesday.

The Trudeau government is proposing to eliminate the Crown corporation in charge of traveller, baggage and worker security screening at airports.

Buried in Finance Minister Bill Morneau's 460-page budget is a clause noting that the government is "transitioning the Canadian Air Transport Security Authority (CATSA) to an independent, not-for-profit entity."

"The government intends to introduce legislation to establish this entity," budget 2019 states.

The budget also proposes funding for CATSA and Transport Canada, its regulator, to kickstart the new non-profit and "to ensure that air travellers and workers at airports are effectively screened" alongside the federal police force, the RCMP.

Canada’s federal government wants to strengthen citizen resilience to online disinformation, it said in its 2019 budget, as democracies around the world face increasingly complex attempts to maliciously influence public opinion and voting intentions.

The budget would allocate $19.4 million over four years to launch and run a Digital Democracy Project to “support research and policy development on online disinformation in the Canadian context.”

It said that foreign influence and disinformation campaigns had in recent years “created new avenues for malicious actors to interfere with the democratic process, as evidenced by numerous attempts to influence election outcomes around the world, including in well-established Western democracies.”

We will not be free of

We will not be free of corporate influence until we elect a political party that is free of corporate influence - do not elect Conservatives and Liberals. All of their policies can be traced to lobbying by large corporations. In this way, the people of Canada can make sure that we maintain control of the political agenda. Our focus will be income equality, renewable energy, fair labour laws, adequate health care, protections from the food profiteers, chemical and pharmaceutical industries, not to mention control of monopolizing corporations (Bell, Rogers Telus, SNC Lavalin, etc...). Canadian citizens need to really think about our future, our planet, because these corporations just don't give a shit. They pretend to care: "this project must be approved because it will promise thousands of jobs" they say. In fact. the only thing these projects promise is billions of dollars of profit and shareholder dividends.

The most urgent priority of

The most urgent priority of our times is global warming/climate change. I see nothing here that takes it seriously. We need to transition off fossil fuels quickly - and while doing so take care of the workers. Instead the government plans to have industry expand the bitumen sands operatio and drill off the east coast. We also need to help underdeveloped countries go fossil fuel free.