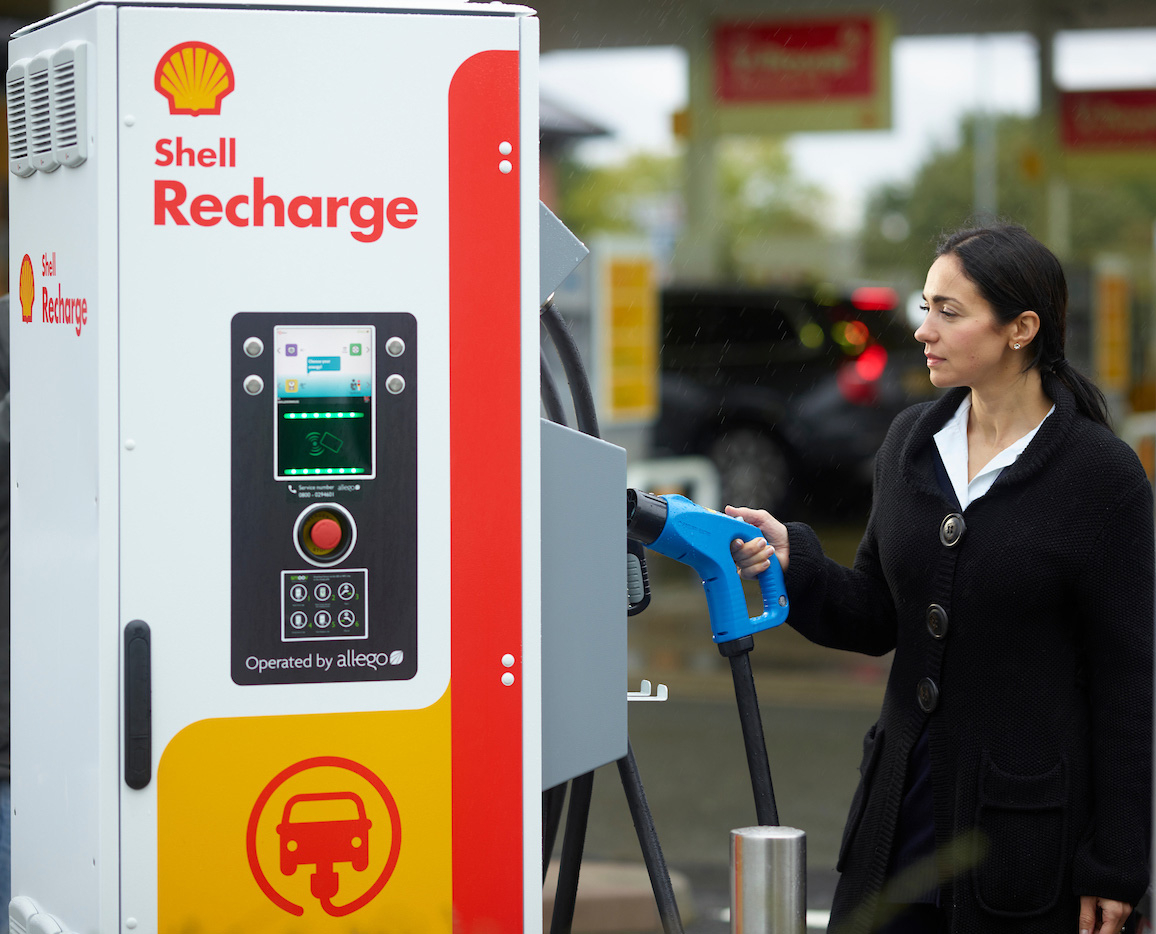 Shell has begun installing EV chargers at its stations in the U.K. Handout photo from Shell
Previous story
Next story

A short list of just 25 fossil fuel producers are responsible for half of all carbon emissions since 1988, according to the The Carbon Majors Report. The report indicates that if fossil fuel extraction continues the same trend over the next 28 years, global average temperatures would rise approximately 4°C by the end of the century.

Diversification may be a matter of survival for fossil fuel companies in the event there is a global acceleration towards complying with the Paris Agreement. That would mean leaving 60 to 80 per cent of reserves in the ground. What are presently assets could turn into liabilities to the tune of $674 billion (USD) now and $6 trillion by 2028.

While getting Big Oil to pivot to clean energy may seem far-fetched, some fossil fuel giants are starting to get serious about reducing their carbon footprint and diversifying towards clean technologies. Shell is one example of the widening fault lines among Big Oil, and a very notable one.

Shell admitted in 2016 that peak oil demand might be just around the corner. The company set a goal of cutting the carbon footprint of its energy products in half by 2050, with an interim goal of 20 per cent by 2035. Shell has set these targets in partnership with Global Action 100+, representing $32 trillion in assets, and The Institutional Investors Group on Climate Change.

The company is now setting short-term targets in line with its objective to comply with the Paris Agreement. In a very notable move, the company will tie executive pay to its short-term “Net Carbon Footprint” goals.

Under pressure from these shareholders, Shell also withdrew from the climate-denying lobby group, the American Legislative Exchange Council, even though its competitors remained members. The company publicly served notice on several other industry lobby groups — including the Canadian Association of Petroleum Producers — that their climate policies were "misaligned."

Shell has set itself a new vision for the future. Not surprisingly, there are many contradictions inherent in such a transition. The new vision includes a transition to clean electricity and new fuels (biofuels and hydrogen in particular) but also a greater use of liquefied natural gas (LNG) which is, of course, a fossil fuel. What is striking, however, is the degree to which Shell is putting its money behind clean tech.

Shell’s first steps towards energy diversification came in the form of commitments to invest $1 to $2 billion per year in energy alternatives through 2020. Shell plans to double its investments in clean technology to $4B per year after 2020. It has even predicted that the company’s clean technology firms could rival its oil and gas business in the 2020s.

All of this may mean a shift away from greenwashing. That is to say that clean tech might no longer be a sideline for Shell.

Maarten Wetselaar Shell’s Director of Integrated Gas & New Energies declared that “electrification is the biggest trend in energy.” Wetselaar added “we are interested because we think we like what we see in the next 20 years.”

Consequently, Shell aims to be the "biggest electricity company in the world in the early 2030’s.” Brian Davis, VP Shell Energy Solutions confirmed the Shell vision of global transition to electrification and Shell wants to be at the leading edge of this transition. To consolidate its clean tech initiatives the company created Shell New Energies. And they have been on a buying spree.

Shell has been acquiring zero emission vehicle charging companies, including:

The company is also expanding into clean electricity, buying:

Shell is moving into energy storage, by purchasing:,

And the company has invested in/acquired micro-grid developers, including,

The acquisition strategy is combined with an ambitious policy to invest in start-ups for insights on new technologies and business models, sometimes combining this with mentoring and joint-ventures.

Brian Davis paints a picture of combining organic and non-organic growth in the company’s new directions, some of the changes coming from within Shell, while non-organic parts include buying external skills, to offer complementary packages to the consumer under one umbrella.

The company says this is one big experiment, that some of its new ventures will work, while others won’t, and it will focus on scaling up what works.

Putting the pieces together

Shell’s pilot venture to put all the pieces of the puzzle together is in the U.K. where the company has rebranded First Utility, which serves over 700,000 homes, to become Shell Energy Retail, which will sell solar energy, micro-grids, energy storage, smart thermostats and EV charging infrastructure under one umbrella.

In addition to installing charging stations at its service stations in the U.K., Shell is participating in an European partnership with Daimler, BMW, Ford and the Volkswagen group in setting up common fast charging infrastructures, the Ionity network.

Shell is aiming for the cultural integration of many firms, some of the new acquisition enterprises remaining intact but supported by Shell, while others get absorbed into the company. An example of integration is Greenlots, the EV charging company taken over by Shell, which will also deal in distributed energy sources and grid balancing services.

Other Shell initiatives include having joined the Global Wind Energy Council where Shell will be part of an Offshore Task Force to develop offshore technologies outside Europe. Also in wind, Shell is aiming to become a major player in the U.K. offshore wind sector. The company is one of the owners of the 731.5 MW Borssele III/IV wind farm projects to be constructed in the Dutch North Sea.

Biofuels, hydrogen and energy efficiency are on the Shell agenda as well. While electrification is viewed as the future path for passenger vehicles, biofuels and hydrogen are regarded as solutions for heavy duty transport, aviation and energy storage. Biofuels sources include ethanol derived from sugarcane and cellulose plus to waste-to-biofuels.

The company claims its returns in new energies are among the best in the industry, 8 to 12 per cent.

Shell’s LNG business is an important example. Shell is a bigger gas than oil company and has been in the LNG business for 50 years. Recent projects raise the question of whether Shell may be more interested in diversifying its bets for tomorrow’s markets, rather than having an interest in low and zero carbon alternatives, per se.

In October 2018, Shell announced it was willing to invest $40 billion in a proposed LNG facility in Kitimat, B.C., making it the biggest investor in this facility.

Yes, even on natural gas, the company has been willing to break with old ways. When Donald Trump moved to abolish rules on methane (effectively scuttling the Canada-U.S. methane agreement), Shell called on the White House to have the U.S. Environmental Protection Agency strengthen oil and gas methane restriction regulations. “It is a big part of the climate problem and frankly we can do more,” said the company's U.S. chairperson.

For now, the green transition only represents 5 per cent to 10 per cent of Shell’s total investments, but it is increasingly clear that change is coming, along with more contradictions.

Anybody who thinks transition

Anybody who thinks transition from enslavement by Big Oil will be easy has not learned anything about the world in which we live. Internal contradictions in revolutionary times are inevitable - how they are resolved is the key to success or failure. So it will be in the current global revolution. Ordinary people interested in the survival of life on earth - including humanity will have to vote with their actions and their money.

Shell is benefiting from the

Shell is benefiting from the carbon tax breaks for big polluters too. It's the Justinian way.