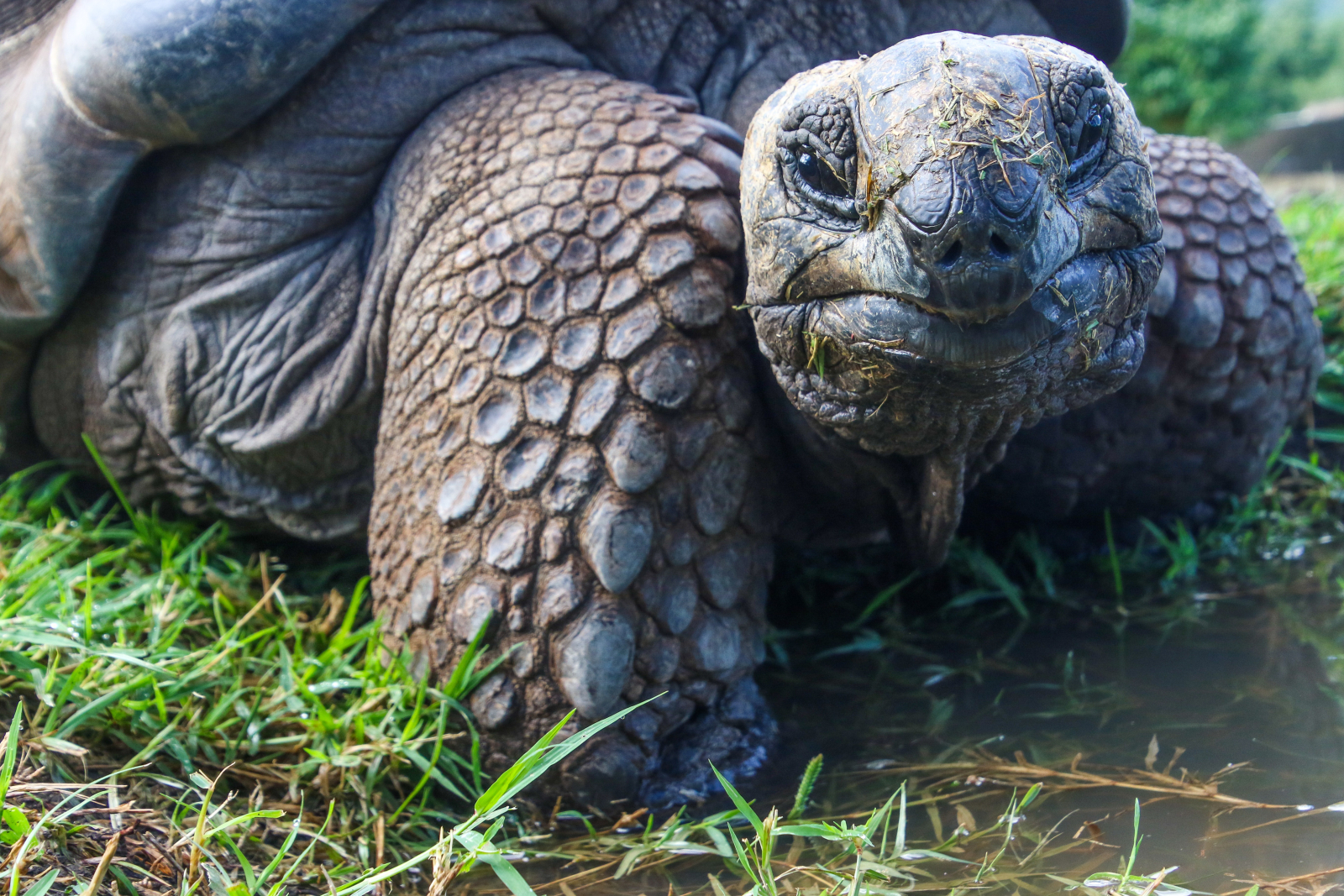 Canada will take centuries to reach its climate targets at the pace it is going. (photo by Magda Ehlers from Pexels)
Previous story

The first thing that jumped out at me was the 12 million tonne (12 MtCO2) rise in emissions since last year's report.

In practical terms, this means that policy makers need to figure out how to eliminate another 12 MtCO2 to meet Canada's climate targets. And now the country has one less year to pull it off.

(Technically, the challenge actually got 13 MtCO2 harder because of a revision to the 2005 baseline starting point. See the end notes for geeky details).

To give you a sense of scale, increasing Canada's climate challenge by 13 MtCO2 is equivalent to tossing another New Brunswick's worth of emissions onto the already huge pile that needs to be eliminated.

What caused such a big one-year jump?

Unsurprisingly, it was caused by a surge in the pollution from the oil & gas industry. Their Canadian emissions jumped 12 MtCO2 from last year’s report. Yep, that equals the entire national increase.

So, the oil & gas industry added another huge emissions burden -- and caused another lost year in the national climate fight — because that industry refuses to stop increasing its pollution.

In response to questions about the latest jump in emissions, Environment and Climate Change Minister Catherine McKenna sent a statement to National Observer saying: “Canada’s climate plan is working, and the overall trend in emissions is downward toward 2030.”

Okay, let's take a look at the "overall trend in emissions" towards Canada's 2030 target. 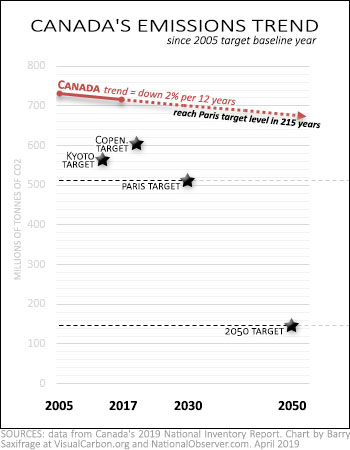 As most people know, countries pledged a 2030 climate target as part of the global Paris Agreement. The Trudeau government pledged to meet a goal already set by Stephen Harper for a 30 per cent reduction from 2005.

We now have twelve years of data — covering 2005 to 2017. At this half-way point, emissions have only declined by two per cent.

Sure, that is technically a "downward" trend. But, as my chart on the right shows, it is so foot-draggingly slow that it will take two centuries for Canada to reach its Paris target at that pace.

And it will take nearly a thousand years to reach Canada's 2050 target level. So, grab your calendar and pencil in a "We Did It!" celebration party for the year 2961 AD.

One thousand years might sound shocking but, actually, I've been low-balling the problem. If you look more closely at the emissions data, we would never reach Canada's climate targets. 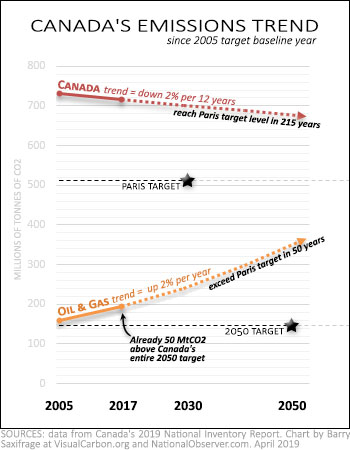 Because the oil & gas industry has its own "overall trend" when it comes to emitting climate pollution. And its emissions trend has been rapidly and relentlessly upwards for as long as Canada has been keeping records.

For example, since 2005 the industry's climate pollution in Canada has been rising an average of two per cent per year.

I've added oil & gas industry emissions to my chart as an orange line.

As you can see, the oil & gas industry already pollutes fifty million tonnes more than the entire country’s 2050 climate target.

To further illustrate the overwhelming impact of this industry's surging pollution in Canada, I created the chart below using the newest data. It compares oil & gas industry emissions (orange line) to those from entire provinces (blue).

Back in 2005, Ontario emitted almost fifty million tonnes more than the oil & gas industry did.

Since then, Ontario cut emissions 22 per cent (mostly by closing its coal plants). Rapidly cutting emissions is exactly what the science says everyone must do to avoid a full-blown climate crisis.

In contrast, the oil & gas industry jacked up their climate pollution in Canada by 23 per cent.

That huge surge in emissions drove this one industry's pollution past the provincial totals from Quebec, British Columbia, Manitoba, Nova Scotia, PEI and Newfoundland & Labrador — combined.

It's an understatement to say that the oil & gas industry's climate pollution is out of control in Canada.

I'll finish up with a quick walk down memory lane looking at Canada's long history of climate promises, and the emissions trends that emerged after each of them.

Our first stop is more than 30 years ago. It was 1988. Ronald Reagan was the U.S. President; the Soviet Union was still a thing; and Calgary hosted the Winter Olympics. That year, Prime Minister Mulroney set Canada's first climate target. The target required an average cut of one per cent per year.

So, how much climate pollution did Canada end up cutting?

As my next chart shows, Canada's emissions have risen by 116 million tonnes.

Then, twenty years ago, the Chretien government promised that Canada would cut climate pollution under the 1997 Kyoto Accord. Once again, that target required an average cut of one per cent per year. And once again, Canada increased its emissions instead.

And here's a friendly reminder that the country’s Copenhagen pledge comes due next year. If you’re wondering how close Canada is to meeting it, the new greenhouse gas report says we are polluting 110 million tonnes more than promised.

Finally, in 2016, the Trudeau government promised an average cut of two per cent per year under the Paris Agreement. As we saw at the top of the article, emissions have gone up.

Clearly, Canada has a long history of promising to clean up its pollution while doing the exact opposite. The consequences are starting to bite.

Another consequence that gets too-little attention is that we've squandered the chance to cut emissions back gradually. Notice in the chart above how the pace of the promised cuts has doubled. Because the government didn’t implement policies to cut back at one per cent per year during the decades when we had the chance, Canadians are now facing cuts of two per cent per year to meet our targets.

The unrelenting laws of mathematics mean that foot-dragging will make the challenge steeper and steeper over time. For example, if Canadian emissions are still at 2017 levels in 2020, Canadians will need to cut three per cent per year just to hit the meagre “Harper targets” we codified in the Paris agreement. That's triple the pace needed to meet the Kyoto and Copenhagen targets when they were first pledged.

Past trends vs future projections

This article has looked at past emissions trends. And for good reason. Past polluting behaviour has been a perfect predictor of whether Canada would honour each new climate promise. So far, I haven't seen action from the oil & gas industry or strong-enough climate policies to make me think this round will be any different.

However, some folks might also want to look at the future projections published by the federal government. These are based on economic computer models that try to include the impact of all current and proposed climate policies. Hey, I'm one of those people, too. If that sounds interesting to you, I've got another article that surveys the most recent years of future projections.

Here are some details on revisions from the latest emissions report that were discussed above.

• The 2005 baseline year was revised from 732 MtCO2 to 730 MtCO2. Canada's climate targets are based on a percentage reduction from 2005 levels. A result of lowering this baseline number is that the final targets numbers will fall a bit as well. In this case, Canada's 2030 Paris target dropped about 1 MtCO2, to 511 MtCO2.

Here are the details on Canada's climate pledges.

If emissions in 2020 are still at that level, then meeting the Paris target will require cutting emissions 28% in ten years. That’s 3% per year average. Another three years of foot-dragging after that would require cutting 4% per year on average to reach the target.

Thank you very very much for

Thank you very very much for doing this.

Keep up the great emissions

Keep up the great emissions accounting, Barry! The solution may be Greta Thunberg's. Everyone go on strike 1 days per week, focus on ousting the leaders that persist in supporting the fossils, and the people that give them the money. We need a Jay Inslee up here for Premier, he's the only one who has climate change on top of his list for President.