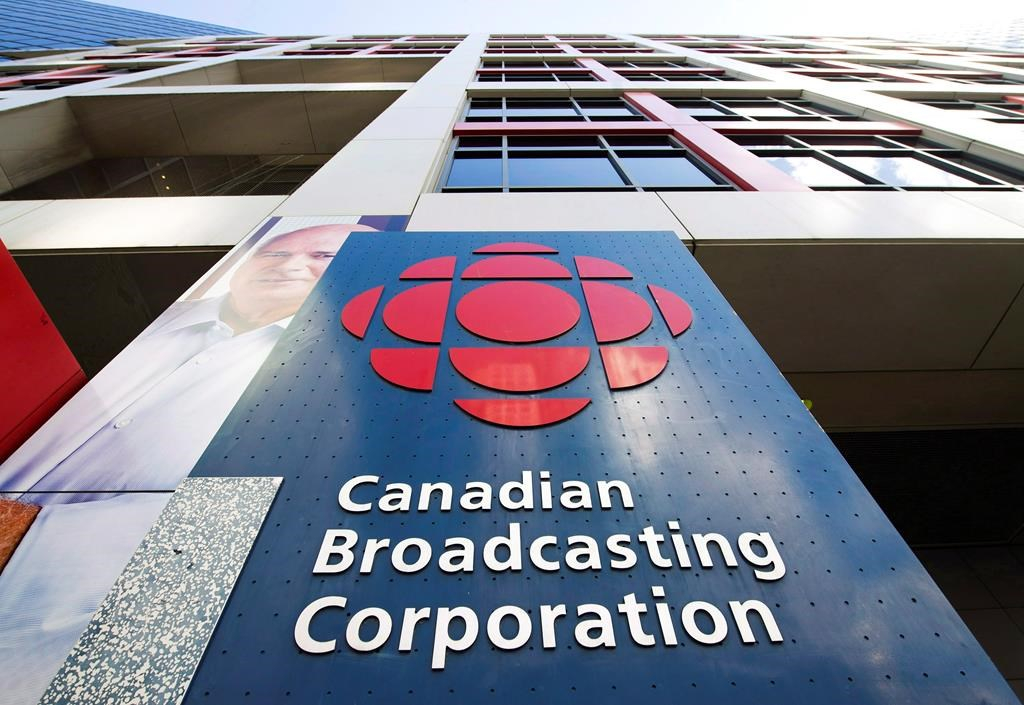 A photograph of the CBC building in Toronto on April 4, 2012. File photo by The Canadian Press/Nathan Denette
Previous story
Next story

Citing a decrease in its operating budget, the news division of the Canadian Broadcasting Corporation announced layoffs Thursday.

Approximately 35 positions were impacted, most of them in the broadcaster's Toronto newsroom, a spokesperson for CBC said.

"Today, as some of you may already know, a number of CBC News staff were given notice of redundancy," wrote Jennifer McGuire, the editor-in-chief of CBC News, in a memo to staff. "This is part of a difficult but necessary exercise to manage a decrease to the CBC News operating budget this fiscal year."

A memo from the CMG, sent to its members on Friday, said the union was told of the impending workforce reduction several weeks ago, and that it has since worked with the CBC to minimize the number of involuntary layoffs at the broadcaster.

"The vast majority of this workforce reduction will take place through cost savings associated with retirements, through attrition, and through an agreement to not fill some positions which currently are vacant and not staffed," wrote Jonathan Spence, the president of the CBC/Radio-Canada Branch of CMG, and Kamala Rao, the president of CMG.

Spence and Rao wrote that less than ten actual redundancy notices have been served, and said those impacted may not ultimately be laid off if they can be redeployed.

The steep year-over-year decline, however was in large part because the Pyeongchang 2018 Olympic Winter Games provided a boost to advertising and licensing in 2017-18. Excluding the impact of the winter Olympics, CBC's revenue from its ongoing activities fell 1.9 per cent in 2018-19, according to the annual report.

"Like every other Canadian media company, CBC/Radio-Canada faces challenges in the context of an ever-shifting media landscape with much disruption," McGuire added.

CBC has to contend with a digital advertising market dominated by sophisticated technology firms such as Facebook and Google.

According to the Canadian Media Concentration Research Project, Google and Facebook accounted for 74.3 per cent of online advertising spending in 2017, while the CBC had a market share of 2.2 per cent which resulted in approximately $300 million in advertising revenue.

CBC's audience will continue to decline if it keeps up its policy of
1. too-many streeters, which is about as informative as asking one's neighbours or someone in a store line up their opinion (what? CBC assumes we're all recluses, with no one to talk to or no ability to strike up a conversation?) and,
2. framing up way too many stories in terms of "How does/did that make you feel?", an emotional wallow that presumes the audience wouldn't know how another person feels if it wasn't laid out -- so very untrue of CBC's particularly savvy and tuned audience.

Most CBC fans need to focus on what the network is best at: laying out nuts and bolts of how and why situations come about and get resolved. For sure, social-media type reporting is so much easier, i.e. lazier, built on the hope that it will bring in a younger audience, but there's a lot of competition on actual social-media platforms for endless, emotional commentary.

Can't agree more. I really do get sick of this lazy journalism we're now seeing at the CBC news service with all this street-level reaction and opinion-gathering based on feelings. How about a few facts! At one time, CBC news journalism had guts.
To be fair, content costs money, and if the CBC is going to continue to focus on product that generates viewership to please advertisers, then I think it's time to have a first-principles public discussion about the CBC and the public broadcasting objectives. My own opinion is that the CBC's objectives as a public broadcaster should be to produce product that is meaningful and relevant in a Canadian context that cannot be produced elsewhere by the private market. That has nothing directly to do with advertising revenue, and in many situations may be incompatible with it. I interpret this principle objective as high quality news and current event analysis of Canadian issues and world issues in a Canadian context, and high quality Canadian cultural programming. We can leave the junk journalism and the associated advertising revenue to the private sector. In the broader sense of the importance of Canadian Content, selling our soul for $300 million in advertising revenue is a chump selling-out for chump-change.

The CBC coverage of the

The CBC coverage of the federal election ended my 50+ years of loyalty. Examples include: on election night, using Marie Heinen as the 'talking head' to comment on our Price Minister's feminism; or finding the only 2 voters in the 905 who said they weren't impacted by Doug Ford's policies when they cast their federal vote. I am truly sick of commentators like Rosemary Barton spewing her point of view in lieu of any factual basis. The CBC used to report news, now it's just facile opinions.

I have been a listener to CBC

I have been a listener to CBC radio and TV for 60+ years. Probably, I am not the market CBC is now interested, but I think my generation is likely a big slice of their current market. Wise not to lose us as well as the younger folks they are not yet engaging.
I am a viewer and listener because I enjoy something more than run of the mill journalism, that picks low hanging fruit (emotions) over substantial reporting such as we get on NO. The election night coverage was quite simply awful. Rosemary tried to tell everyone how to think and ignored many of the experts who could have been informative.
I enjoy the other 3 journalists on the National, but Rosemary can be one of the redundant staff in my opinion.
I hope they pick up the revenue they need, have a serious look at cute and emotional as incompatible with their slice of the viewing/listening market, and return to quality news.

I agree with the other

I agree with the other comments so far.... Though I have often thought that the trend in 'lazy' journalism was probably really 'less expensive' journalism. But there's 'shallow' too - e.g. recently during a Barton interview of Sask's premier, he commented that carbon pricing doesn't reduce emissions there. I was waiting for her to ask, "What will?". Is CBC possibly trying to spread itself too thin for its budget?

What's difference when you

What's difference when you watch CBC, CTV or Global news? It's all the same propaganda. Why should the public pay for this? I think CBC has some good radio programs, otherwise why bother.

Objectivity and depth would

Objectivity and depth would be strengthened if CBC were not competing for advertising dollars. We need a fair and objective national broadcasting network to feed us information and insight about who we are - our 'national identity', What we get from private broadcasting - speaking of propaganda - depends on who owns them, some being more fair than others...

Not entirely sure tha CBC

Not entirely sure tha CBC should be singled out for declining quality in "News" broadcasting. All news outlets have been affected by the trends that are fueled by social media - emphasis on personal "feelings" as opposed to informed fact based, hard edged investigation. CBC does still produce this - but it seems the general public & especially younger people are reluctant to engage in serious political, economic, sociological discussion. Or, maybe it is just me and my 80 year old experience, reflections and opinions that bore and scare the gen xers etc. One has to have some compassion; the struggling and psychologically wrung out youngsters aare torn between their justifiable fears and their anxiety about how to conduct or navigate their lives. In truth, those who are currently in power are frustratingly opaque, uninformed and irresolute. AND worst of all failing to provide tangible progressive leadership in addressing the very real problems humanity faces. Trying to interview these dodgers and weavers is an exercise in futility and makes for pretty useless reporting. Much of the previous commenting is a perfect illustration of the frustration and anxiety we "feel" about our, and our journalists, inability to uncover a coherent narrative of progress and action.

During the run up to the

During the run up to the election and during the election .... even now post election CBC demonstrated a bias in their reporting that actually dismayed me. I always considered the broadcast network the public network subsidized by the taxpayer in order to prevent the biased reporting of privately owned broadcasters. It angered me as it went on. Rosemary Barton became the face for this travesty. Learning of the downsizing I (for a moment) thought oh good they are correcting the insult to the public that they have become by removing the culprits but no.... Maybe in the future?

As a long-standing "news

As a long-standing "news junkie," I find CBC-TV news has two problems: it lacks a sense of urgency that I find on almost every other competing newscast and it seems preoccupied with presenting the news in politically correct fashion. (Example: Adrienne Arsenault began her newscast coverage of the fatal shooting of the OPP officer responding to trouble in Manitoulin by reporting the deaths of "a civilian and an OPP officer." Rather odd priorities in my view. ) It isn't any wonder that so many people prefer CTV Toronto's local newscasts for example. Their weather specialist, Anwar Knight, is really outstanding in providing environmentally valuable messages by reporting almost every day from natural areas and parks throughout the GTA. It sure beats reporting from Bay Street or the chamber of commerce!
As for the National, it is incredible how they are often drifting into lengthy features (the COVID coverage is often terribly repetitive) and ignoring other important stories that are covered by CTV National. With a full hour, the National should be touching all of the bases --- not just a few selected issues. They should also return to the traditional single anchor format which is used by almost every network in Canada and the U.S. for national news telecasts.