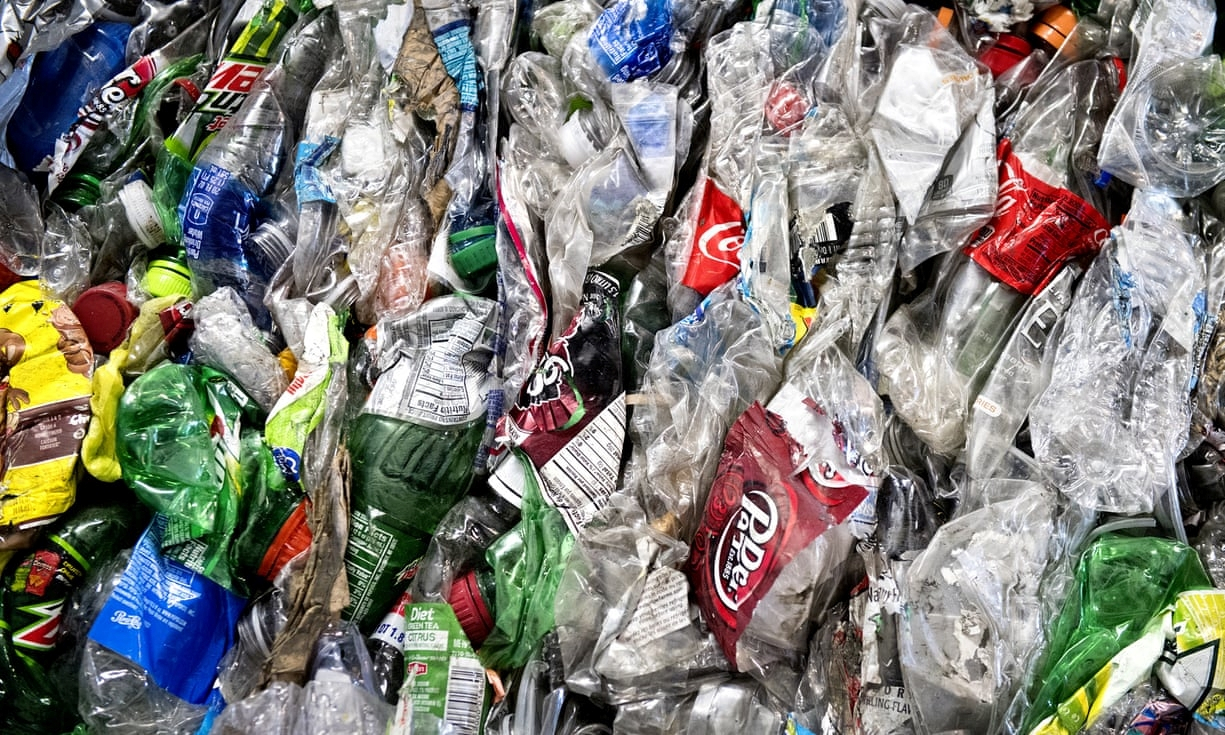 ‘I think we’ve taken convenience and just turned it into a monster,’ said Shaymah Ansari. Photograph by Francis Gardler/AP
Previous story
Next story

America’s government-backed national recycling awareness day is being used as cover by large corporations that are churning out enormous volumes of plastic that end up strewn across landscapes, rivers and in the ocean, critics have said.

The America Recycles Day event, on Friday, was vigorously promoted by the US Environmental Protection Agency (EPA) as a way to encourage Americans to recycle more.

But critics point out that the initiative is the brainchild of Keep America Beautiful, a not-for-profit founded and backed by large companies that produce vast quantities of plastic products that end up as pollution.

Current backers include Coca-Cola, Nestlé, Pepsico, and Altria, the tobacco giant formerly known as Phillip Morris. Decades of campaigns by the group have emphasized individual responsibility for plastic recycling, which data reveals to be a largely broken system.

“Just like the fossil fuel industry, corporate polluters have been using recycling to justify ever-increasing production of single-use packaging, while taxpayers and cities are left to foot the bill,” said Denise Patel, the US and Canada program director of Global Alliance for Incinerator Alternatives.

“Lower-income communities and communities of color, who are the hardest hit and the least responsible, bear the brunt of a model that has brought us to the brink of the waste and climate crisis.”

A huge global expansion in plastic production is under way, threatening to sweep aside any effort to increase the current recycling rate of about 9% of all plastics. A 2017 analysis found that fossil fuel companies such as ExxonMobil and Shell have poured more than $180bn into new facilities that form the raw material for everyday plastics from packaging to bottles, trays and cartons.

This boom is set to fuel a 40% rise in plastic production over the next decade, according to experts, exacerbating the plastic pollution crisis that scientists warn already risks “near permanent pollution of the Earth”.

The Trump administration is simultaneously supporting that expansion and promoting a flawed recycling system.

The EPA administrator, Andrew Wheeler, this week toured a recycling facility in Virginia and the agency is hosting an “innovation fair,” in addition to the summit on Friday.

Wheeler said the agency is “working diligently to identify market-based strategies and innovative ideas to create a more sustainable recycling system in America”.

An EPA spokesperson, asked to point to specific policies the agency is developing to bolster recycling, referred to a voluntary pledge that 45 corporations and government associations have signed. The signatories – which include the biggest plastic producers – have been divided into work groups that have each established a “vision statement, as well as challenges, opportunities and potential actions”.

The Trump administration is simultaneously supporting plastics growth and promoting a flawed recycling system, without enacting changes to fix it.

The problems that poses for consumers is on full display at one Washington DC organic grocery store that runs a program for customers to drop off hard-to-recycle waste.

Shaymah Ansari is in charge of environmental restoration efforts at the Mom’s Organic Market just off a busy highway headed out of the city. She spends hours each week sorting the waste people bring in to make sure it isn’t contaminated before sending it to recycling facilities.

​​​​​​She sees it all – the Amazon bubble envelopes, the bread bags, the used toothbrushes – all the things local residents can’t recycle at home. She also sees optimistic recycling, or “wishcycling” of things that typically can’t be repurposed into new products. One day she found a Kenmore coffee maker.

“I think we’ve taken convenience and just turned it into a monster,” Ansari said.

Ansari sees people trying harder to responsibly dispose of their waste, only to find they often can’t. Many of the plastics they drop off – including bags for frozen food, coffee and lunch meat – end up in the trash.

Even when difficult-to-recycle plastics are repurposed, they are often downcycled into things like plastic benches and fuel and are rarely used to make the same products they came from.

Even if people properly sort and prepare their waste, most plastic never has a chance at getting recycled anyway. About 91% of plastic does not ultimately get recycled. Billions of tons still remain on the planet – from the oceans to the snow in the Arctic and the Alps.

Most of the plastic Americans try to recycle is sent overseas, where it is often landfilled or incinerated. And increasingly, plastics are burned in the US, polluting the air in mostly minority communities.

Judith Enck, a former Environmental Protection Agency official who has launched the Beyond Plastics project at Bennington College, said that means plastics “fundamentally are not recyclable”. She says companies making plastic are pushing personal responsibility instead of supporting new laws and taking accountability for a worldwide plastic crisis.

“Many of us go to the supermarket and try not to buy plastic,” Enck said. “It’s impossible, and it’s not our fault.”

Even if the broader global recycling system was functioning well, the US has another problem: Americans are terrible at sorting and recycling their waste. The country’s municipal recycling rate is 35%, according to a recent analysis – far lower than most developed nations.

Many of us go to the supermarket and try not to buy plastic. It's impossible, and it's not our fault

Germany, the most efficient country, attempts to recycle 68% of its waste. Plastics producers in Germany are forced to take back the single-use bottles they make, collecting them in reverse vending machines at grocery stores. And communities are required to have extensive sorting systems.

People in the US say they care deeply about the planet, with 74% agreeing “the country should do whatever it takes to protect the environment”, according to a Pew Research Center poll. But only 32% say it bothers them “a lot” when people throw away things that could be recycled.

Jessica Nolan, the director of the conservation psychology lab at the University of Scranton, said the US lags behind other countries because it lacks government policies that signal recycling is important.

“By putting laws in place that mandate recycling or incentivize recycling, what that tends to do psychologically is it increases peoples’ expectations that other people are going to participate,” Nolan said. “No one wants to be a sucker – nobody wants to be spending all this time and energy doing something if no one else is doing it.”

San Francisco, for example, instituted strong recycling policies more than a decade ago and reached an 80% recycling rate, Nolan said.

But some localities are scaling back their recycling programs, as China has begun to refuse recycling shipments from the US that are contaminated with food or the wrong kinds of plastics. In New Orleans, Louisiana, for example, the parish government will no longer accept plastic containers labeled 3 through 7, meaning they will go to a landfill.

Many activists argue that plastics recycling is so broken that humanity should return to a zero-waste economy, starting with food and beverage packaging. Metal, glass and paper should still be reused and recycled, they say, but single-use plastic should be largely phased out.

Even compostable plates and cups have raised alarms, both because some of them don’t actually biodegrade and because some include harmful chemicals.

Miriam Gordon, who works with companies to limit their waste at Upstream Solutions, said activists are up against “convenience culture”. Just decades ago, many households didn’t need their trash collected because they didn’t produce trash beyond food scraps, she said.

Berkeley, California, is piloting a program for reusable stainless steel cups at cafes, partnering with the company Vessel, which distributes, collects and cleans the cups

“If we are going to go back to reusables and refillables, we have to have a culture-changing strategy,” Gordon said.

Here is the raw and

Here is the raw and unvarnished truth but even the Observer presents it in an anodyne way that doesn't really stoke up the resolve of readers to do better and to rage at the oil/gas/chemical industries that blindly refuse to engage in solutions to the crisis literally engulfing us.

Somehow, consumers of goods in the first half of the 20th C. managed to thrive quite happily without all the useless packaging. The creators of plastics however were entirely unsatisfied with their market penetration and began the campaign to change the retail industry from it's perfectly sustainable model of bulk product offerings that store clerks could customize to the buyers needs and send home with them in useful paper sacks, Pre-packaged items appeared in similar paper/cellulose based packages but chopping down forests for wood pulp is no more sustainable than plastic.

The retailers, driven by their fears of losses by theft and their reluctance to pay clerks to actually sell un-prepackaged items were easily seduced into the "neatness" of packaged items so that now instead of buying the one piece of hardware one needs, one is forced to buy a package of several and these surplus-to-requirements purchases wind up littering our lives, enriching producers and retailers and degrading our environment with landfills and unregulated dumping.

IN the first decade of my life my mother managed to feed and care for her household of 4 producing only one newspaper wrapped (football or less), sized bundle of compostable garbage . Milk bottles were reused by the dairy that delivered, and glass and metal containers were snapped up by scavenging "scrap" collectors or by the municiple trash collectors.

Wartime habits of saving, reusing and reducing gradually died away to be replaced by the gluts of packaged and unre-useable items that now be-foul the planet.

The fact that the "packaging sector" is now a significant, component of the GDP and source of employment for displaced retail clerks makes it difficult to reform and simplify the production cycle. Instead of local producers we now have a global network of mega industrial production that consumes enormous amounts of fossil fuel, shipping items produced for pennies over vast distances and, in the process, the costs of those products are largely inflated by the packaging and shipping. This globalised business model has resulted in vast and unneccessary overproduction, befuddling amounts of choice, and mountains of waste which form the "supermarkets" for the eternally impoverished and disenfranchised.

It is only in specialised "bulk" emporiums that you can avoid over packaging. but even there if you want to avoid plastic you have to supply your own containers. We have been sold on the neccessity of packaging safety and security;, avoidance of tampering, avoidance of "contamination", quality preservation, etc. 99% of which is hype and hooey.

Humans are far too susceptible to novelty, vanity, convenience, and fear. As a result we are destroying our planet.