How the Climate Crisis Is Killing Us, in 9 Alarming Charts 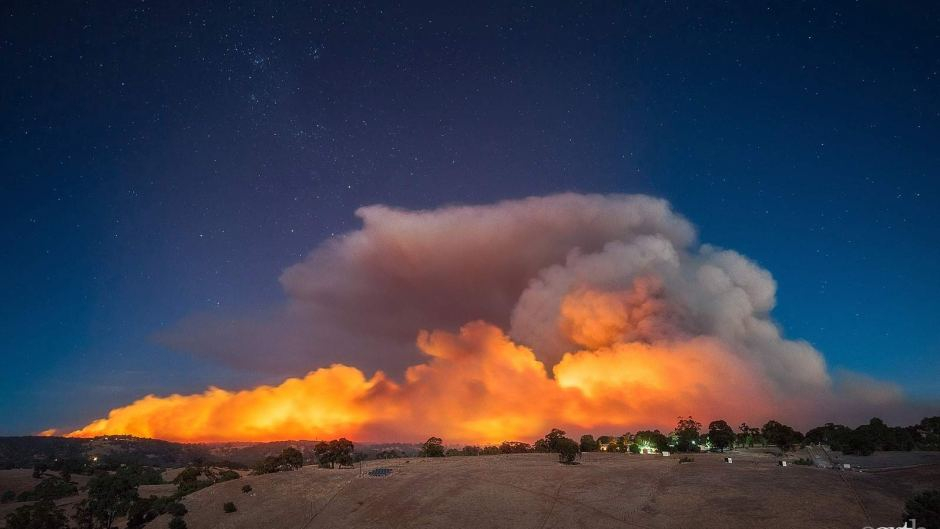 Maybe you live in Ohio, far away from rising seas. Maybe you live in Canada, nowhere near a blazing desert. You might think climate change isn’t your problem, at least not yet. But maybe today we can change your mind.

The medical journal The Lancet just released its annual report on climate change and human health. A work of over 100 experts—doctors, climatologists, economists, and more—the massive study looks at 41 indicators, including extreme weather like droughts, energy trends like fuel use, and agricultural impacts like changing growing conditions.

The collective implications are ugly: A child born today, the authors note, could live in a world that’s 4 degrees warmer than in preindustrial times. “We have no idea what that looks like from a public health perspective, but we know it is catastrophic,” said Nick Watts, executive director of Lancet Countdown: Tracking Progress on Health and Climate Change, during a press conference announcing the findings. “We know that it has the potential to undermine the last 50 years of gains in public health and overwhelm the health systems we rely on.”

It’s not too late to reverse some of these trends or dodge the worst outcomes. “The challenge we face now is how to make it personal—how do we make people understand that it's about them, and they can do something,” said former EPA administrator Gina McCarthy, now director of the Center for Climate, Health and the Global Environment at Harvard. “I want them to know that climate change isn't a lost cause. I want them to know that they can demand policymakers to take specific actions that will not just reduce the threat of climate change, but be opportunities for clear, immediate investment in public health today.”

Understand the problem, and we can better see the solutions. Below are nine key graphs from the new Lancet report that best capture the crisis and what it means for the collective health of humanity. 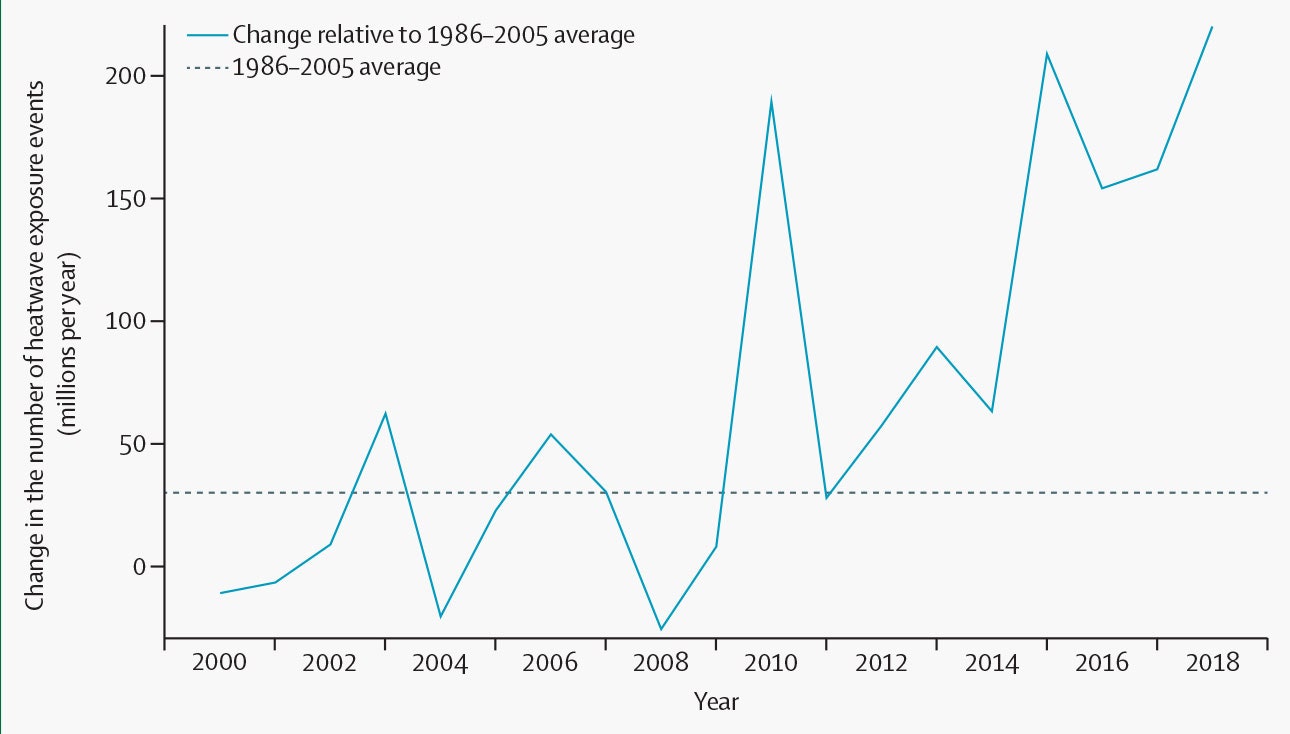 Change in the number of heatwave exposure events in people aged 65 years and older, compared with the historical 1986–2005 average number of events.REPRINTED FROM THE LANCET, WATTS ET AL., THE LANCET COUNTDOWN 2019, COPYRIGHT (2019), WITH PERMISSION FROM ELSEVIER

Climate change is making heat waves more extreme. This has been particularly apparent in Europe, where multiple countries set temperature records this past summer. These events are particularly dangerous for the elderly, who often live alone in apartments that until recent years didn’t need air-conditioning, but that now easily overheat. A heat wave “exposure event” in this graph is one heat wave experienced by one person over 65. In 2018 there were 220 million heat wave exposures globally, which broke the previous record of 209 million in 2015.

Air-Conditioning: The Solution and Problem 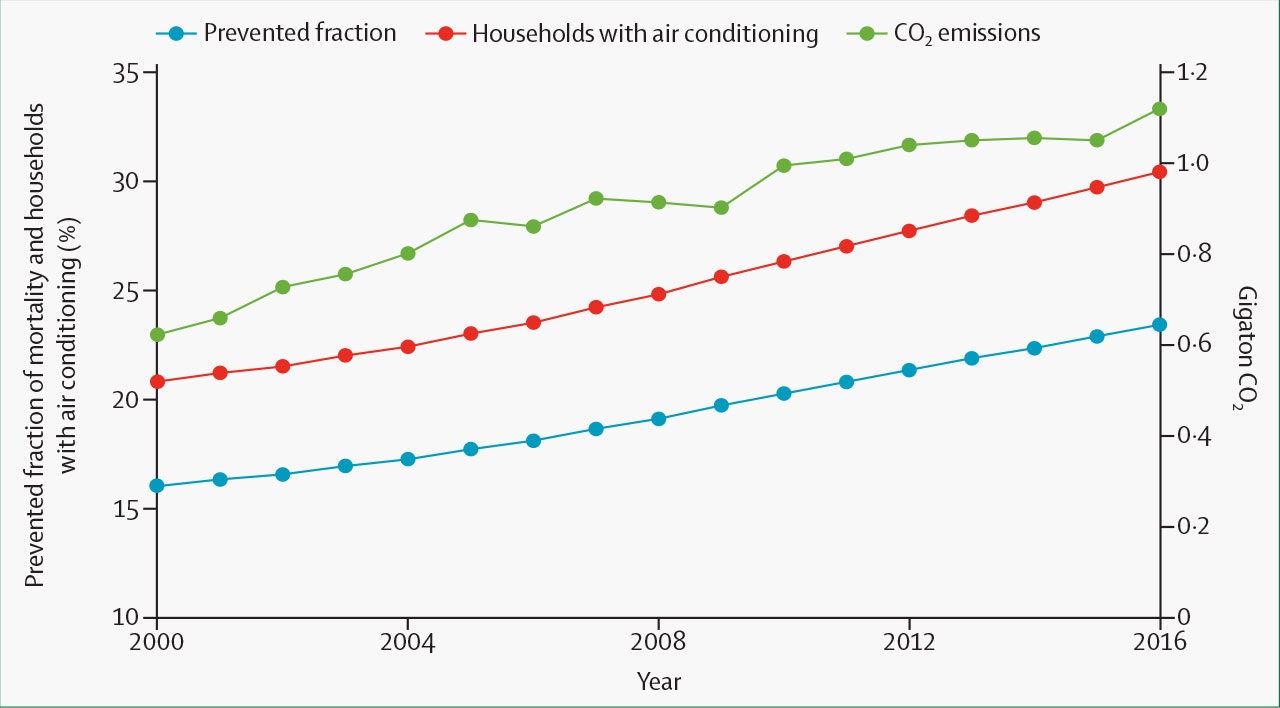 Air-conditioning saves lives, but it also uses a massive amount of power and releases heat as a byproduct, exacerbating warming in urban areas. As the world gets warmer, humans need more air-conditioning, thus perpetuating a nasty feedback loop. The world’s air-conditioning stock, both residential and commercial, more than doubled to 1.6 billion units between 2000 and 2016.

Too Hot to Work 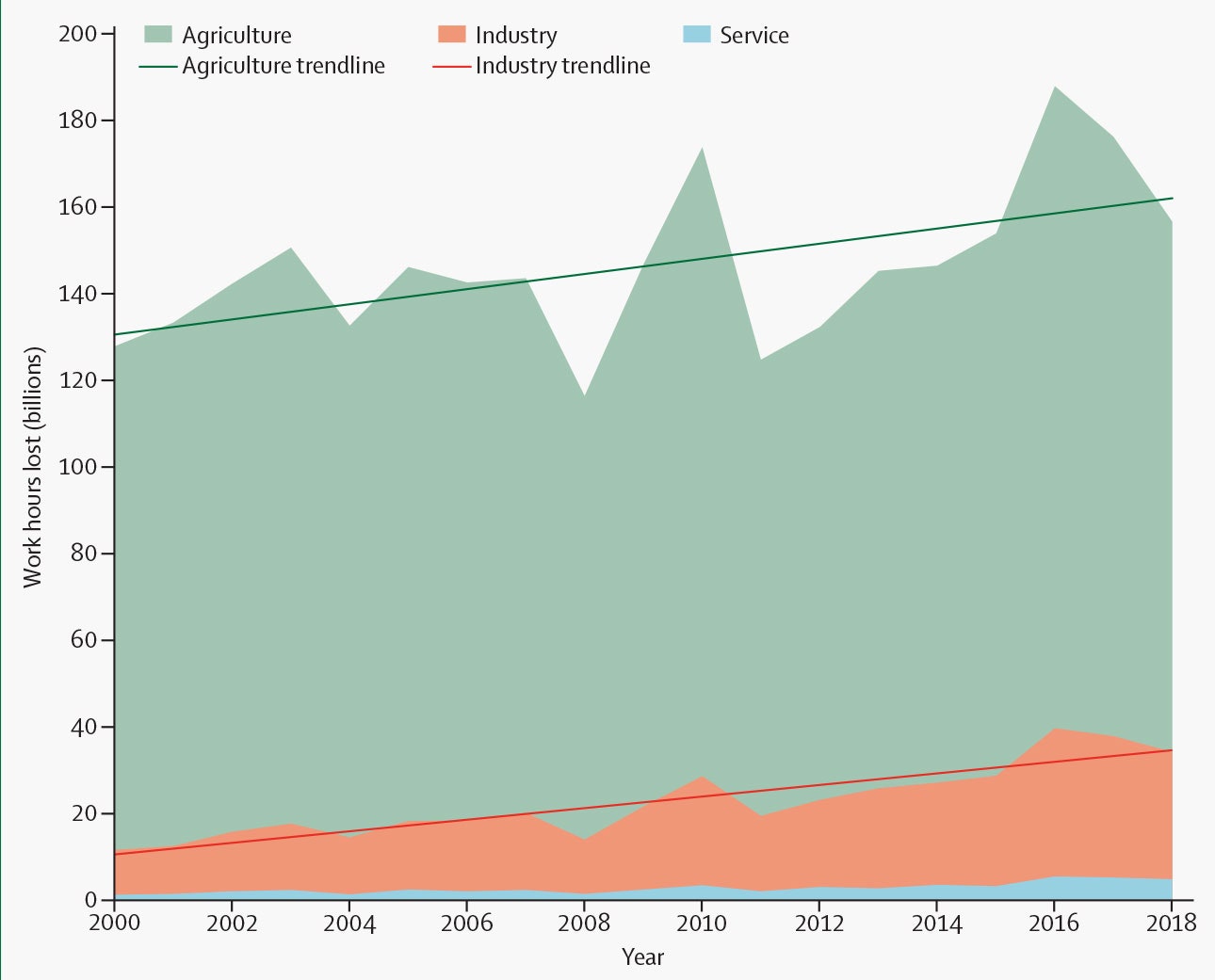 Potential global work hours lost per sector due to heat, 2000–18.REPRINTED FROM THE LANCET, WATTS ET AL., THE LANCET COUNTDOWN 2019, COPYRIGHT (2019), WITH PERMISSION FROM ELSEVIER

A hotter world means a greater risk of heat stroke for outdoor workers, particularly in agriculture and construction. As a result, they’re forced to work fewer hours—in the southern US, businesses lost up to 20 percent of their potential daylight work hours in 2018’s hottest month. The drop in productivity translates directly into economic losses: Across the world in 2018, 133.6 billion potential work hours were lost due to heat.

Map showing the average annual number of days people were exposed to wildfires in 2018REPRINTED FROM THE LANCET, WATTS ET AL., THE LANCET COUNTDOWN 2019, COPYRIGHT (2019), WITH PERMISSION FROM ELSEVIER

Perhaps the most dramatic consequence of climate change is supercharged wildfires: Drier weather leads to drier brush, which fuels massive blazes. This map shows the average number of days that people were exposed to wildfire in 2018. Wildfires are further exacerbated by deforestation in places like South America. In sub-Saharan Africa, vast grasslands readily burn, ignited either by lightning or intentionally by humans. Wildfire brings with it both direct health effects in the form of burns, as well as cascading effects on respiratory health from inhaled smoke and mental health from disaster trauma. 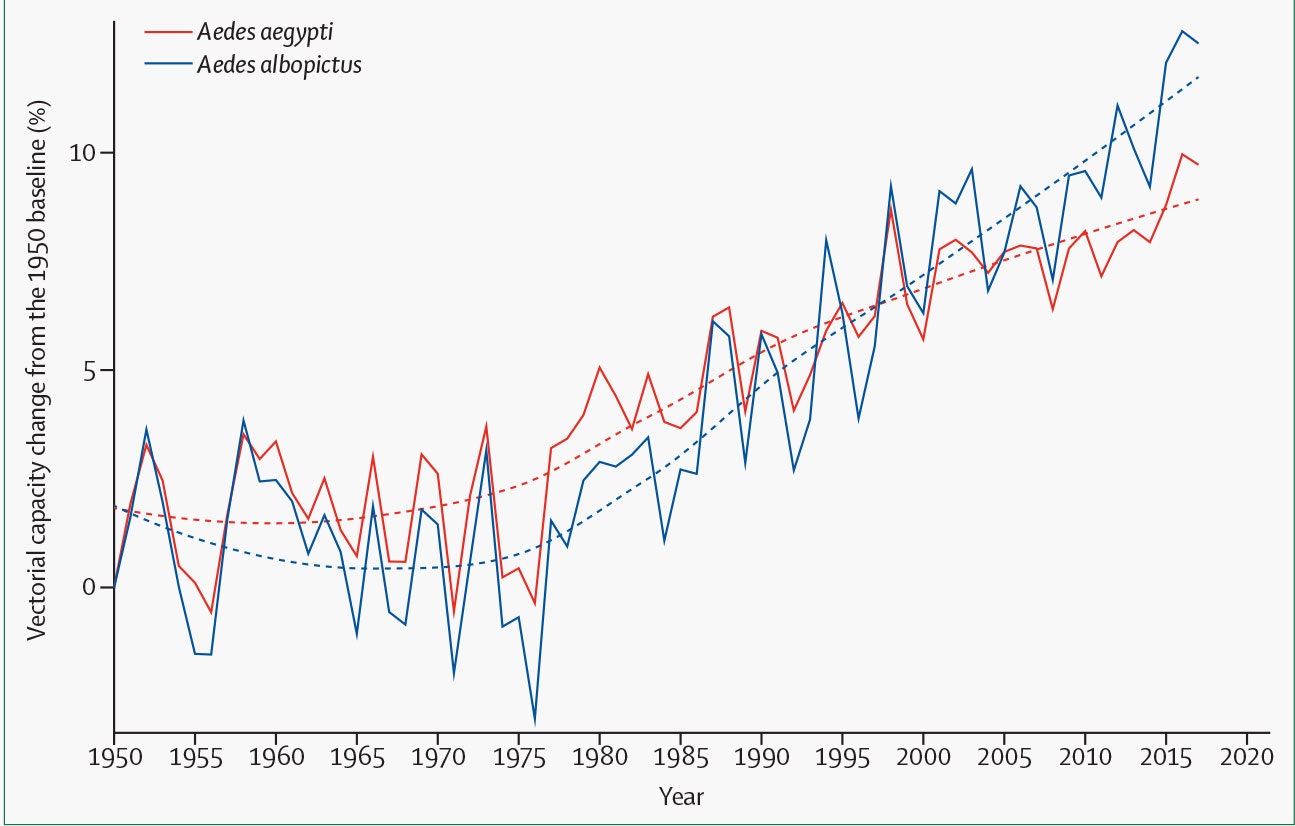 Changes in global vectorial capacity for the dengue virus vectors Aedes aegypti and Aedes albopictussince 1950.REPRINTED FROM THE LANCET, WATTS ET AL., THE LANCET COUNTDOWN 2019, COPYRIGHT (2019), WITH PERMISSION FROM ELSEVIER

Climate change is increasing the risk of contracting dengue, transmitted by the mosquitoes Aedes aegypti and Aedes albopictus. This is due to a number of factors, including the fluctuation in high and low temperatures in a day. Nine of the 10 most suitable years on record for the transmission of dengue have been in the last decade.

Dengue is not the only concern, even in the US. “We actually are seeing a trend of diseases that are vector-borne, like chikungunya and a few others, that we used to see or hear about in the Caribbean, and they're gradually moving north,” said former surgeon general Richard Carmona in the press conference. “So all of these things that are global are also national for us.” 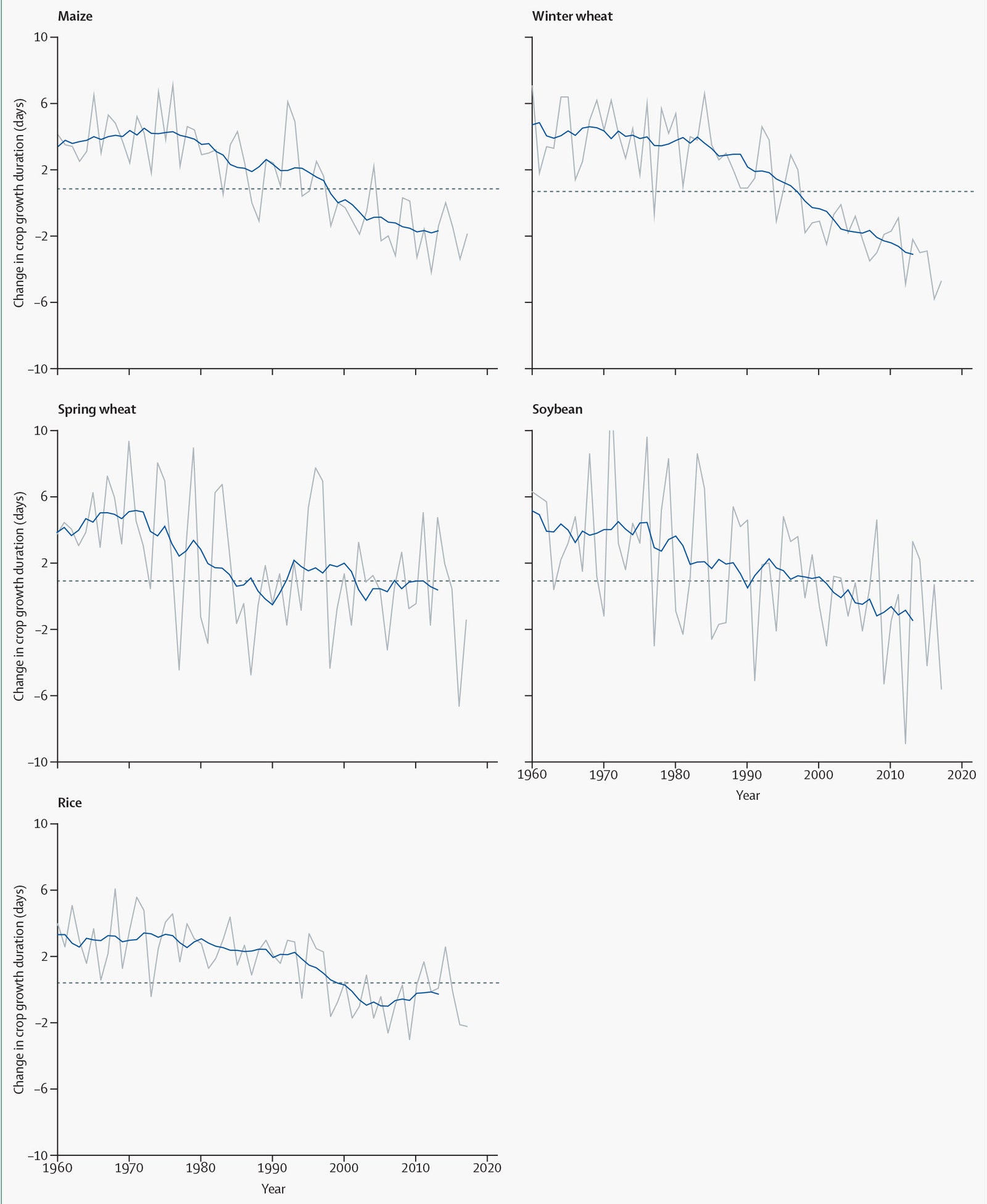 These graphs show declines in the duration of growth of major crops—essentially the crops mature too quickly with lower seed yield. This is a proxy for declining yield potential. For each 1 degree Celsius increase in global mean temperature, corn yields will fall an average of 7.4 percent, wheat by 6 percent, and rice by 3.2 percent. Farmers also have to worry about drought, as well as pests that move into new regions as the climate changes. Malnutrition is of particular concern for children, who can develop permanent disabilities if they don’t have an adequate diet in their formative years. 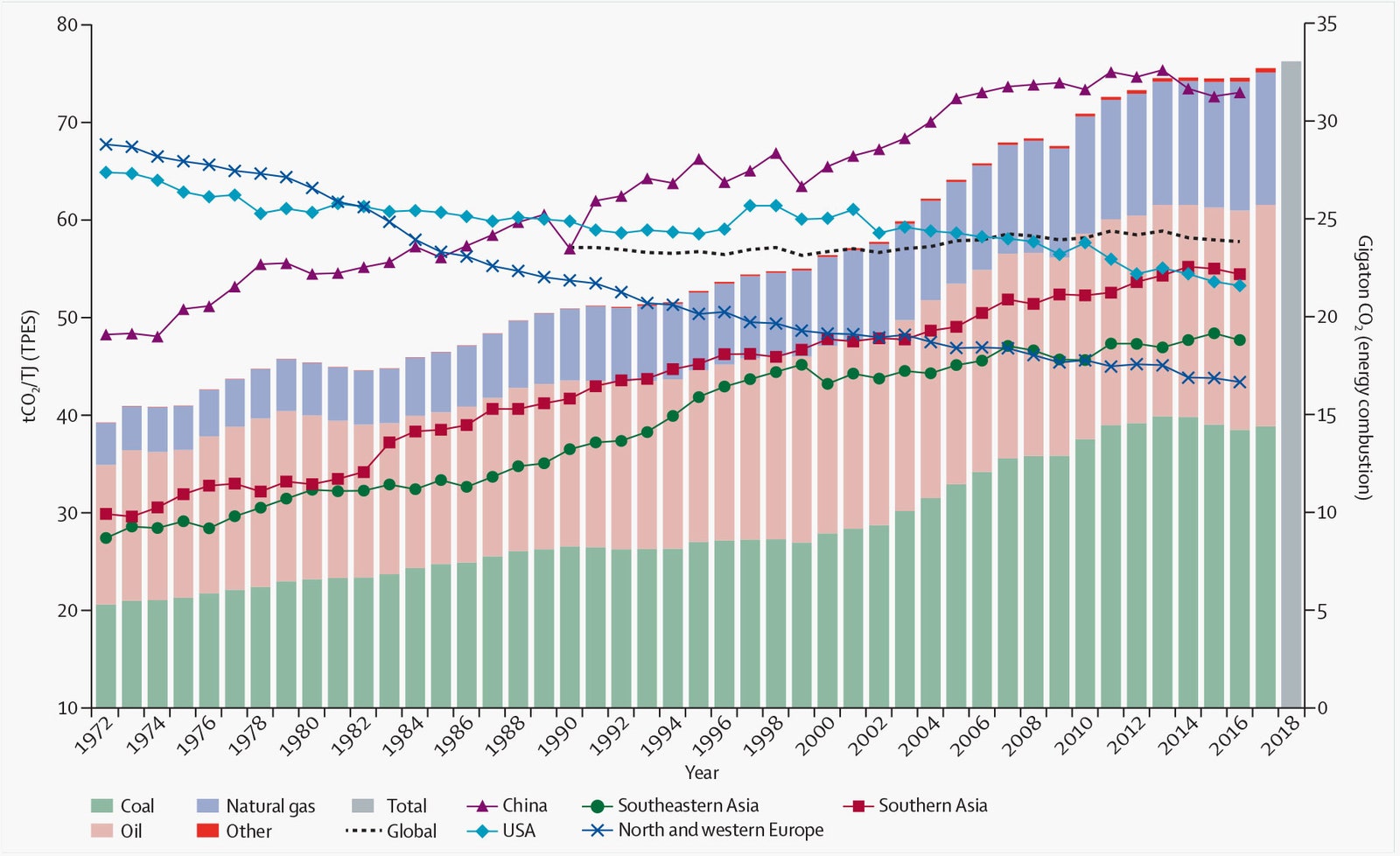 Far from the drastic reduction in emissions that humanity needs in order to stave off disaster, greenhouse gas emissions from fossil fuel combustion went up by 2.6 percent from 2016 to 2018. 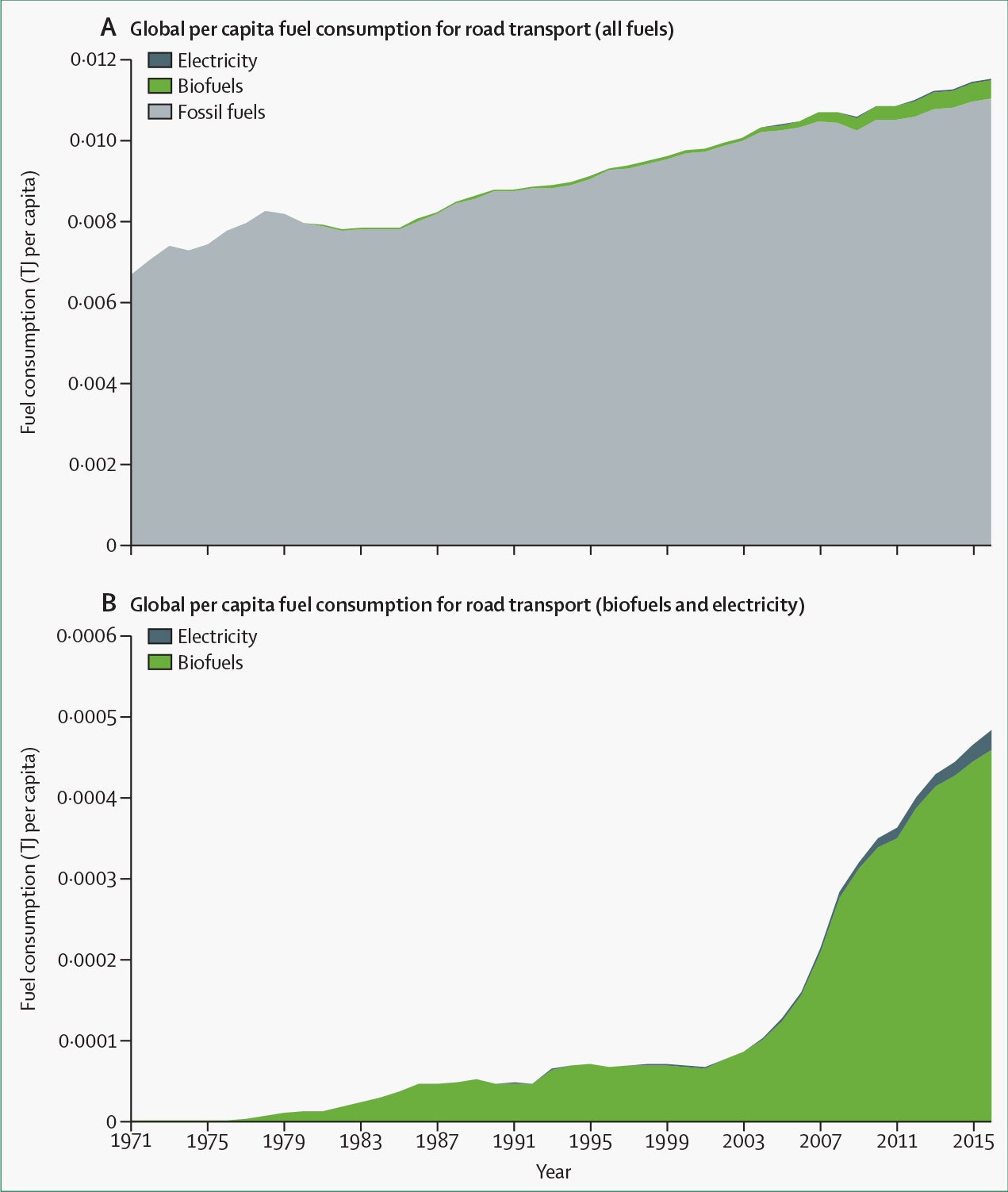 Road transportation remains dominated by fossil fuels. Biofuels and electric power are starting to make a dent, but their impact remains small. Air pollution is a significant threat to human health, and it is only growing more dangerous as more people crowd into cities around the world.

By reimagining transportation, we could redesign our cities for the public good. “By looking at low-emission vehicles, by looking at transportation corridors, we can not just reduce the pollution, but we can provide opportunities,” said McCarthy, the former EPA administrator. Making cities more walkable and bikeable would reduce emissions and improve respiratory heath, while making citizens more active and improving their health overall. On top of that, cities less dominated by cars are safer for pedestrians. 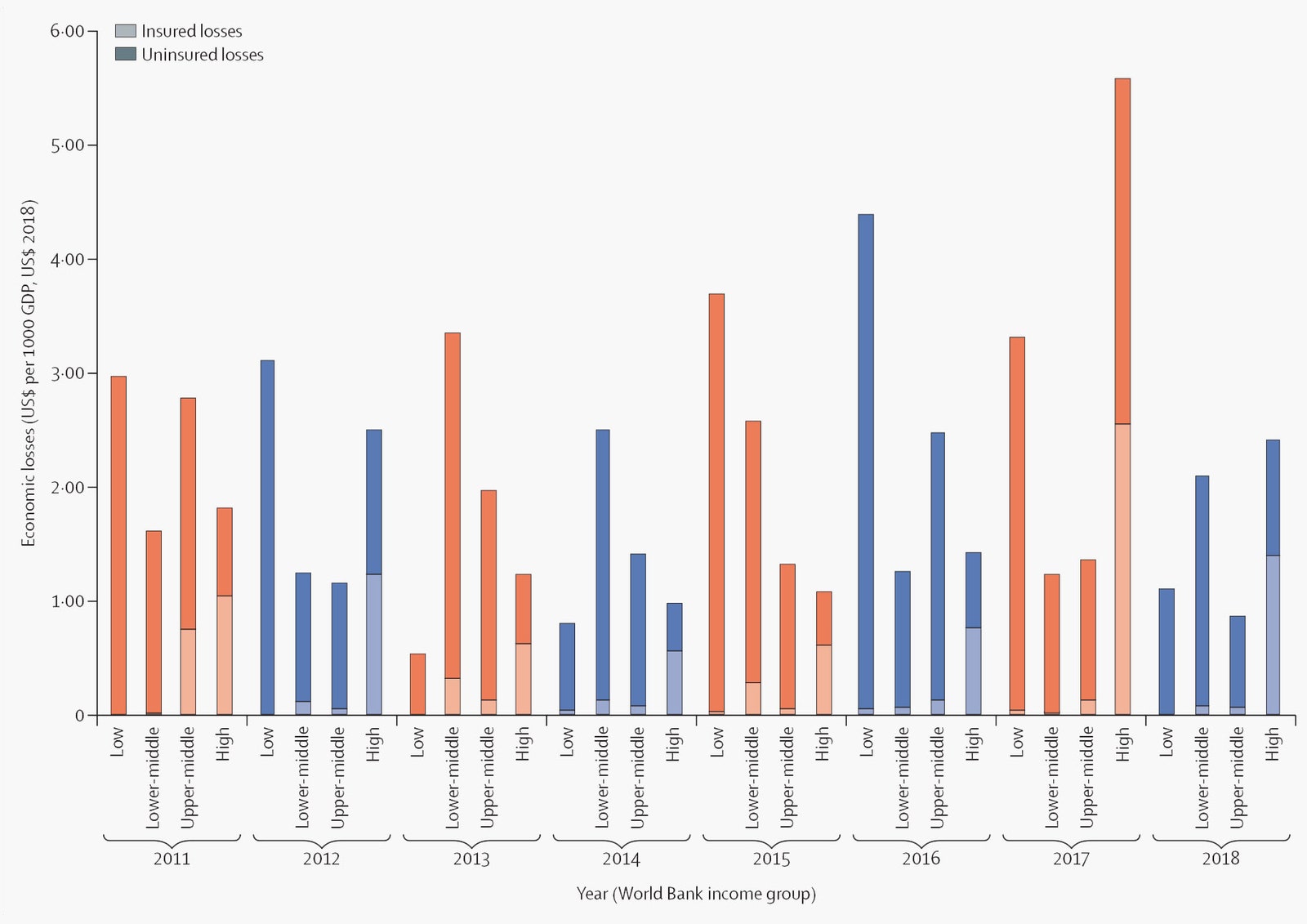 Economic losses from climate-related events relative to GDP. GDP=gross domestic product. US$2018=based on the value of the US dollar in 2018.REPRINTED FROM THE LANCET, WATTS ET AL., THE LANCET COUNTDOWN 2019, COPYRIGHT (2019), WITH PERMISSION FROM ELSEVIER

This is what inaction looks like—in cold, hard cash. In 2018 the world suffered $166 billion in losses from extreme events related to climate change. Failing to cut greenhouse gas emissions will lead to yet more damage, loss of life, degradation of human health, and weakening of Earth’s interconnected systems.