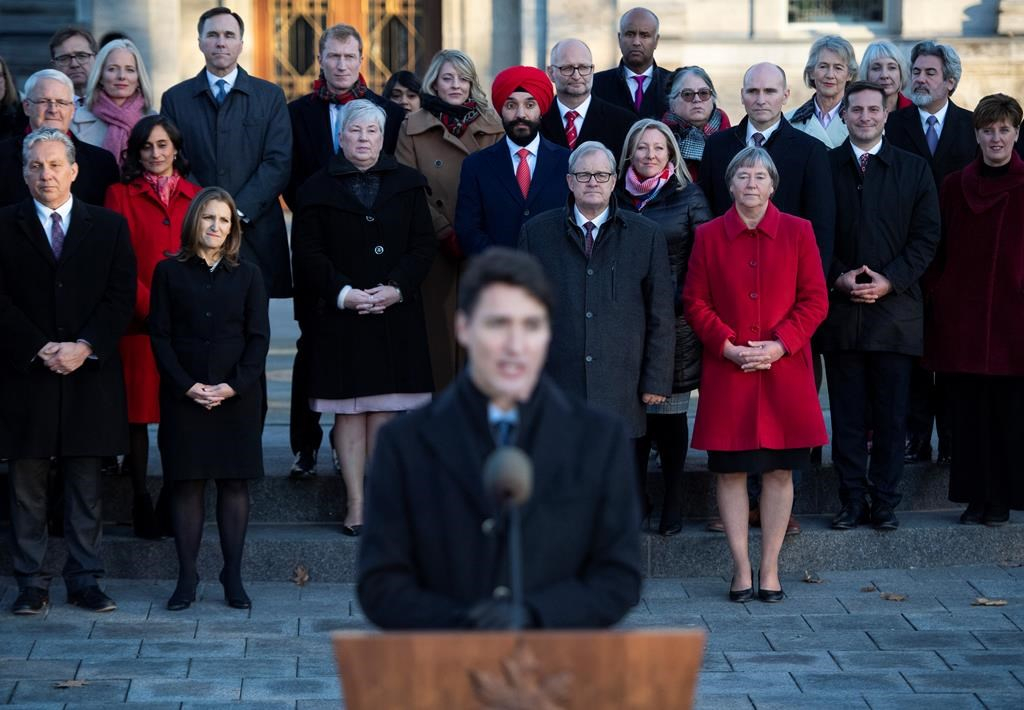 In addition to Jonathan Wilkinson, who was named minister of environment and climate change last month, 16 members of Trudeau's cabinet were given explicit directives to work on climate issues.

That includes ministers whose portfolios have traditionally overlapped with environmental concerns, such as the minister of natural resources and the minister of oceans and fisheries. But Trudeau is also challenging officials such as the minister of Canadian heritage, who will "work with national museums to increase Canadians' awareness of climate change" and work with Wilkinson on new legislation to regulate federally owned heritage lands. (Before entering politics, Heritage Minister Steven Guilbeault was a prominent environmental activist.)

Wilkinson, whose mandate letter calls on him to introduce new greenhouse-gas reduction initiatives to help Canada achieve its emissions targets under the Paris Agreement, will be an especially active and influential figure in cabinet.

Hajdu, for example, will work with Wilkinson and Bibeau on changes to the Canadian Environmental Protection Act to protect people from pollution. Freeland and Wilkinson will work together on implementing the Pan-Canadian Framework on Clean Growth and Climate Change, developing carbon targets that exceed the Paris Agreement's 2030 goals with a mind to reaching net-zero emissions by 2050.

Catherine McKenna, who served as environment minister following the 2015 election until Wilkinson's appointment, will have several responsibilities related to her old portfolio in her new job as infrastructure minister. She has been charged with leading the government's Clean Power Fund, which will finance clean-energy projects for northern, remote and Indigenous communities, and will also work with municipalities across Canada to disperse funding for climate initiatives through the Green Municipal Fund, the Municipalities for Climate Innovation Program and the Municipal Asset Management Program.

"People have been clear that they want progress on the issues that matter most, from fighting climate change and strengthening the middle class to walking the road of reconciliation, keeping people safe and healthy and positioning Canada for success in an uncertain world," said Trudeau in a statement.

In his government's throne speech, delivered earlier this month at the opening of the 43rd Parliament, Trudeau made clear that climate change would be centre stage in his government's priorities going forward.

"Canada's children and grandchildren will judge this generation by its action — or inaction — on the defining challenge of the time: climate change," said Gov. Gen. Julie Payette in the speech.

Tim Gray, the executive director of Environmental Defence, praised the government's decision to factor climate and environmental issues into so many mandate letters.

"Tackling the climate crisis must be an overriding priority for all governments," he said in a statement. "Canada’s transition to a low-carbon economy will create new opportunities, and the government has a responsibility to ensure that the transition is a just transition."

In particular, he flagged government commitments to ban single-use plastic products, reform the Environmental Protection Act and extend protections to the Great Lakes.

Here is a list of all the climate-related directives the prime minister gave cabinet ministers beyond the environment portfolio:

Nice to see some dawning

Nice to see some dawning recognition of the fact that climate heating impacts on, and risks, all. Surprised not to see more, but hopefully these are minimum lists, rather than maximums.

How about Min of Health, work with Min of Transport to expedite rapid buildout of mass and active transit systems in large and medium sized cities, coast to coast?

Min of Health, work with provincial partners to invest in expanded and widely distributed exercise and diet expertise and programming to communities, to simultaneously address the untenable burden of chronic disease due to inactivity and poor food choices, while simultaneously reducing emissions from driving and from meat consumption. This would help solve doctor shortages by giving doctors a go-to health centre they could "prescribe" to overweight, obese, sedentary, diabetic, depressed or anxious, and hypertensive patients. Doctors could be freed up from a huge burden of chronic disease management, if we prevented a lot of it in the first place.

How about Minister of Finance consult urgently with financial institutions, CPP, and major insurers to reduce risky investments in and bankrolling of the fossil fuel industry that our children can't afford us to continue, and which put Canadian wealth at risk, due to the necessity to abandon fossil fuels in the ground (or become extinct).

How about Minister of Foreign Affairs and Minister of Infrastructure and of Innovation, consult with Caribbean nations repeatedly impacted by Atlantic hurricanes of increasing ferocity, to learn lessons and aid rebuilding, with opportunities to develop and promote Canadian renewable and energy-efficient technology. Don't just send paltry amounts of money, and then sit back. We've helped cause their losses with our oil profiteering and burning.

How about Min of the North, get cracking on subsidizing renewable energy systems to the North so that they can potentially grow healthy food locally, especially as road infrastructure disappears due to permafrost melt and winter warming.

How about Min of Parks and Min of Agriculture and of Natural Resources, get cracking on re-foresting, elimination of mass spraying of herbicides, preservation of old growth forest, protection of endangered species, birds, and pollinators, because healthy forests will help reduce carbon in the atmosphere.

How about Min of Finance and Min of Nat Resources, shut down the ridiculous and foolhardy expansion of pipelines to ship a product too expensive and toxic to continue excavating, at the risk of our children's futures.

How about Min of Transport and Min of Innovation, recognize that only one EV company has invested in a mass buildout of rapid charging infrastructure that is saving governments enormous investment and simultaneously rapidly accelerating the uptake of EVs (Tesla), and thus remove the cap on rebating their longest range EVs, as we do actually WANT people to be able to meet all their travel needs with EVS, and thus to purchase them; this could incentivize other EV companies to quit passing the buck to taxpayers for the buildout of charging infrastructure.

So many possible options for accelerated and urgent and necessary action from our governments, if they would actually behave as though the climate emergency they (appropriately) declared, was an actual emergency. Huge gains could be made if there were de-siloing around the urgent need for mitigation and adaptation on a massive scale. We should start with the goal (get emissions down 60% within a decade) and then remove all obstacles from achieving it, as opposed to starting with the Ministers and their job lists, and asking them to find ways to squeeze in some action on climate change. Adequately addressing the climate crisis should be the central priority of this and every government, until it is safely done.

Thank you to the article writer for gathering together and reporting these climate-related bits. It is slightly heartening. It would be vastly more heartening if pipeline expansions, LNG fracking, and coal shipping were tossed in a hurry, and workers in those industries compensated and retrained, such that we were actually not digging a bigger and bigger hole to have to climb out of, as well as behaving like hypocrites, while island nations are submerged or smashed.