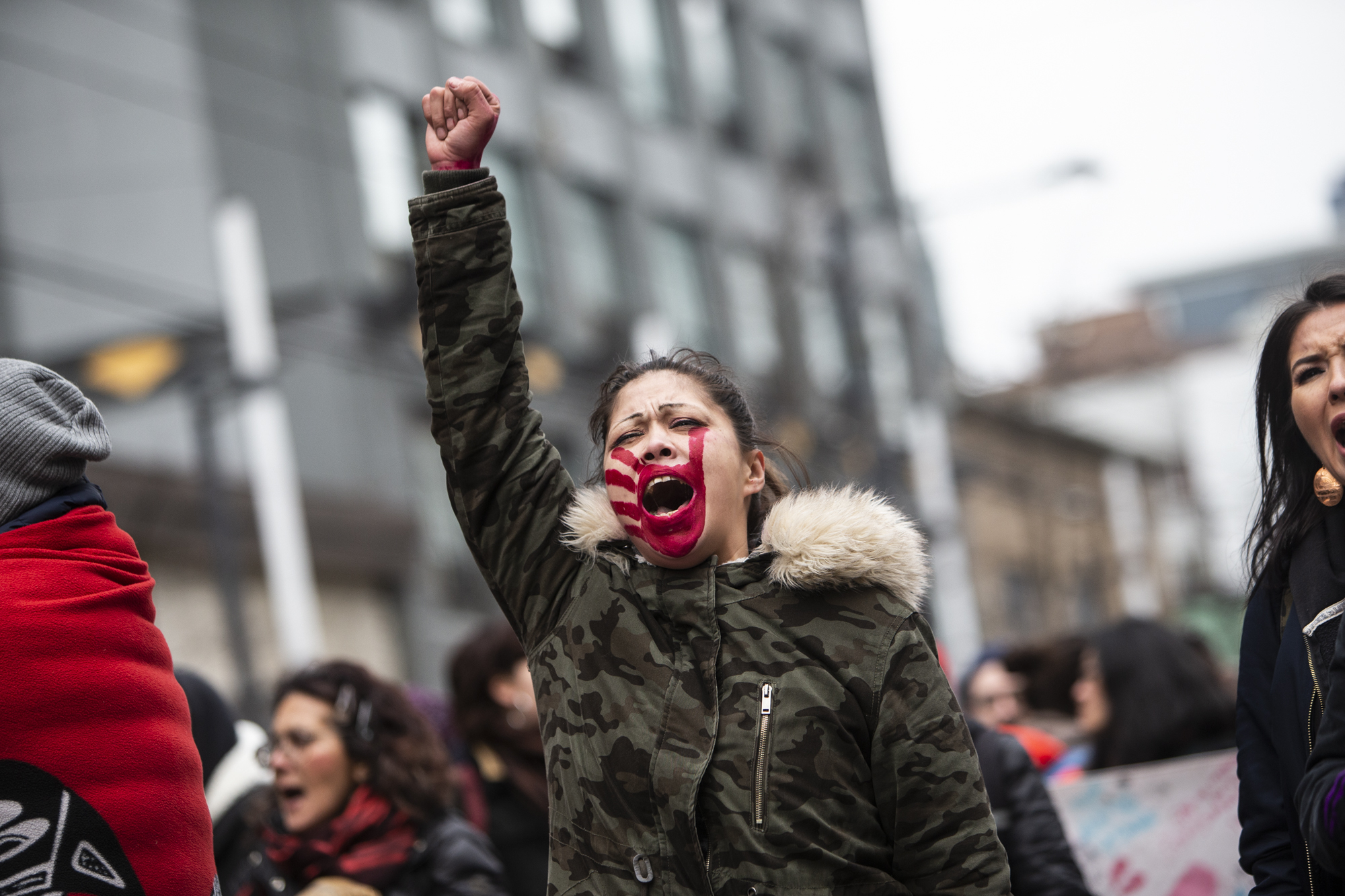 It was just before dawn and Geneva Stowell knew the cops were coming.

She had spent the previous night camped out with other supporters of the Wet’suwet’en hereditary chiefs, blocking the entrance to the Port of Vancouver — one of the largest commercial ports on North America’s west coast.

Having delivered an injunction against the continued blockade the night before, Vancouver police officers moved in just after 5 a.m. Monday morning, sweeping up Stowell and dozens of other demonstrators.

“We were sitting around the sacred fire and the police started coming in,” Stowell said. “The first person that they took, they brought him down with seven officers.”

Soon Stowell was escorted to a police van, handcuffed and placed in cells along with the 32 others who were arrested Monday morning, making them some of the first in what is now many dozens of people arrested at similar blockades and solidarity actions that have sprung up across the country this week.

Those actions have caught on like spot fires, from Victoria to Newfoundland. And they are proving difficult for the authorities to predict or stamp out. Rail lines, highways and other critical infrastructure have been blocked — all in support of the Wet’suwet’en hereditary chiefs and their decade-long struggle against a natural gas pipeline through their territory.

During a pre-dawn raid on Feb. 6, dozens of RCMP officers, backed up by tactical teams with assault rifles, dogs and surveillance drones, raided the first of three anti-pipeline camps along a forest road outside Houston, B.C.

As police enforcement action continued at two other camps along that road, supporters started mobilizing across the country, including in B.C’s lower mainland.

It was just before dawn and Geneva Stowell knew the cops were coming. She had spent the previous night camped out with other supporters of the Wet’suwet’en hereditary chiefs, blocking the entrance to the Port of Vancouver. #Wetsuweten

Stowell first went to the Vancouver blockade on Saturday — two days after the RCMP had dragged land defenders screaming from the Wolverine Watch camp on the Morice West Forest Service Road.

“I’ve actually been thinking a lot about it in the past few months,” she said. “The biggest reason I’m here is that I believe in what the Wet’suwet’en people are doing.”

“I believe they are a sovereign nation, and their laws and traditions should be respected in their territory,” she said. “I believe that they are fighting for the future generations.”

Coastal GasLink, the company that is trying to get a $6-billion natural gas pipeline through Wet’suwet’en territory, has agreements in place with all the First Nations band councils along the route.

It’s part of the larger LNG Canada project planned to ship natural gas from near Dawson, B.C., to a facility on the coast in Kitimat, where it will be cooled into liquefied natural gas and eventually shipped to markets in Asia.

Wednesday in Vancouver, Stowell spoke, standing on the steps of the B.C. Superior Courthouse, surrounded by hundreds of supporters. And then she filed a formal legal challenge against the Port of Vancouver injunction that allowed police to arrest her and the others.

From the court house, hundreds marched through the streets to occupy the front entrance of a downtown office building that organizers said housed the Vancouver offices of Coastal GasLink.

And while police have now cleared blockades and ports and key intersections across the lower mainland, and a days-long occupation of the B.C. legislature in Victoria has also ended, the protest organizers say they are far from done.

“We can be fluid,” said one organizer, who spoke to the crowd, characterizing the struggle as guerilla warfare.

“We can attack at any moment — we can keep moving quickly, blocking key points, costing them money and exacerbating the political crisis,” the organizer said.

One of the things that sets these protests apart from previous struggles is the number of non-Indigenous supporters, or settlers, that are taking to the front lines and are willing to get arrested.

After a similar police raid on Wet’suwet’en camps last winter sparked outrage across the country, there were protest marches and rallies, but few arrests. By Wednesday, almost a week since the start of this year’s raids, close to 70 people across the country had been arrested by various police forces, and more are likely to come.

Stowell has both settler and Indigenous ancestry, from the Secwepemc Nation in the southern B.C. interior.

“Indigenous rights are personal for me,” she said.

But she’s buoyed by the number of white faces she sees at the support actions, in part because they — like her — have the privilege to face arrest with potentially fewer consequences than Indigenous people or people of colour.

“At times like these, it's important to put aside our personal luxuries, and to be willing to potentially lose something,” she said.

After departing the downtown office building, Wet’suwet’en supporters blocked the Granville Street bridge, one of the key arteries into the city’s downtown core. Some drivers, frustrated by the nearly hour-long delay, argued with protesters through their car windows.

Others got out of the cars and joined in temporarily.

As the afternoon wore on, people began to trickle away from the march. But activists were already planning their next action for the following morning.

After almost a full week of solidarity actions, it seems Wet’suwet’en supporters in British Columbia are not done yet.

great reporting Jesse. Keep it up because you make me feel like I am there on the ground. L feel the fear and the courage

Trudeau discussed how “climate change and reconciliation must continue to be at the forefront of all government actions"..... so, don't allow expansion of the tar sands and start recondilliating.

The RCMP and the government

The RCMP and the government of Canada and BC are losing sight of our Charter Rights.
Part 1. 2. says Everyone has the following fundamental freedoms:
(b freedom of the press and other media

It appears to me that the RCMP is acting unlawfully and both federal and provincial governments must know that or they ought to know it.

I'd be up there with them, if I didn't have to milk goats twice a day! But I offered them some goat cheese!