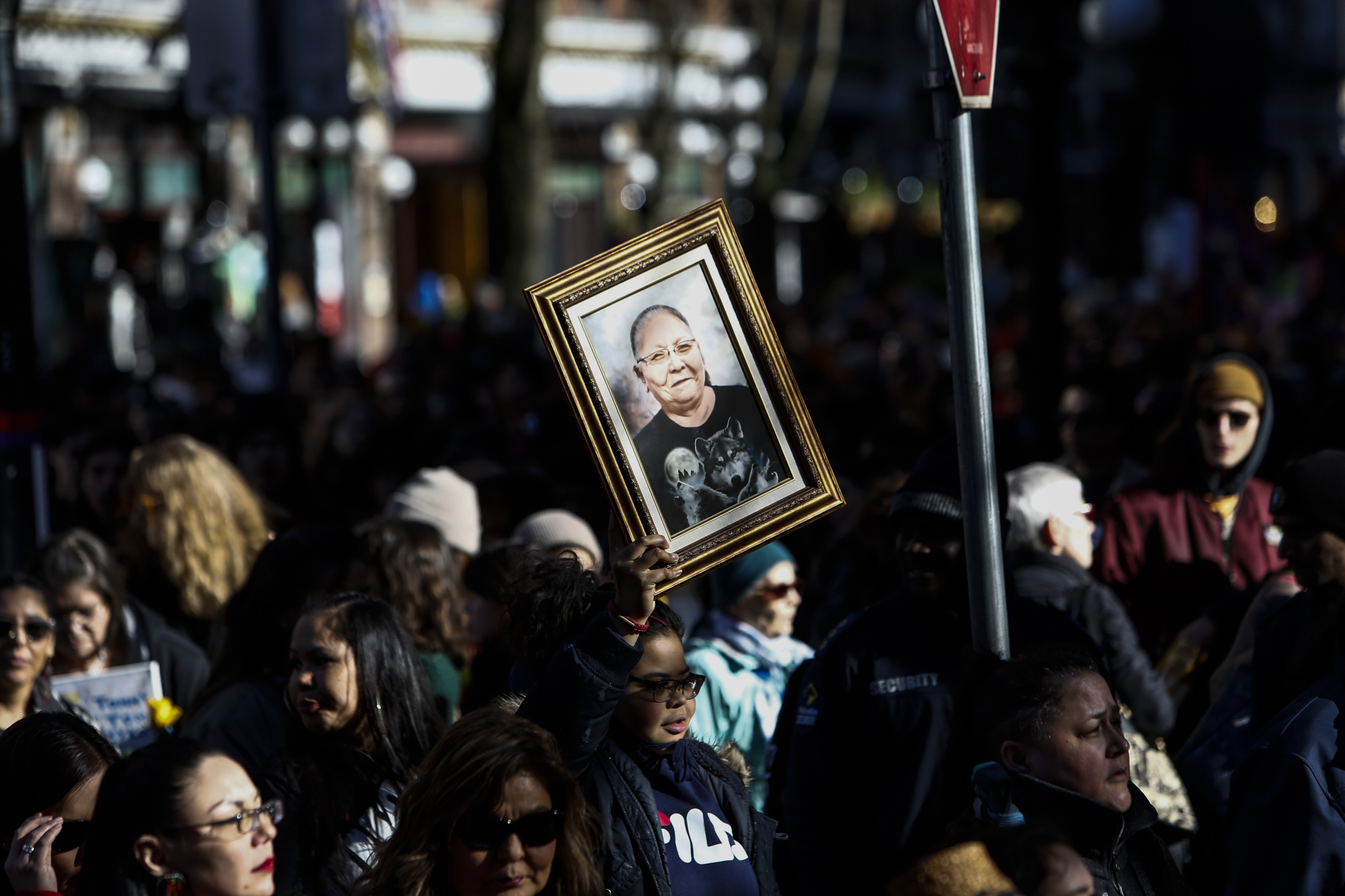 As blockades in support of the Wet’suwet’en hereditary chiefs grind on across Canada, crippling the country’s rail infrastructure, things in Vancouver returned to a semblance of normal Friday.

But in Vancouver, in the heart of the Downtown Eastside, returning to normal meant the annual honouring of Canada’s thousands of missing and murdered Indigenous women and girls.

The Wet’suwet’en supporters who blocked the rail line Thursday night said they agreed to remove the blockade Friday morning out of respect for those victims, and their families. 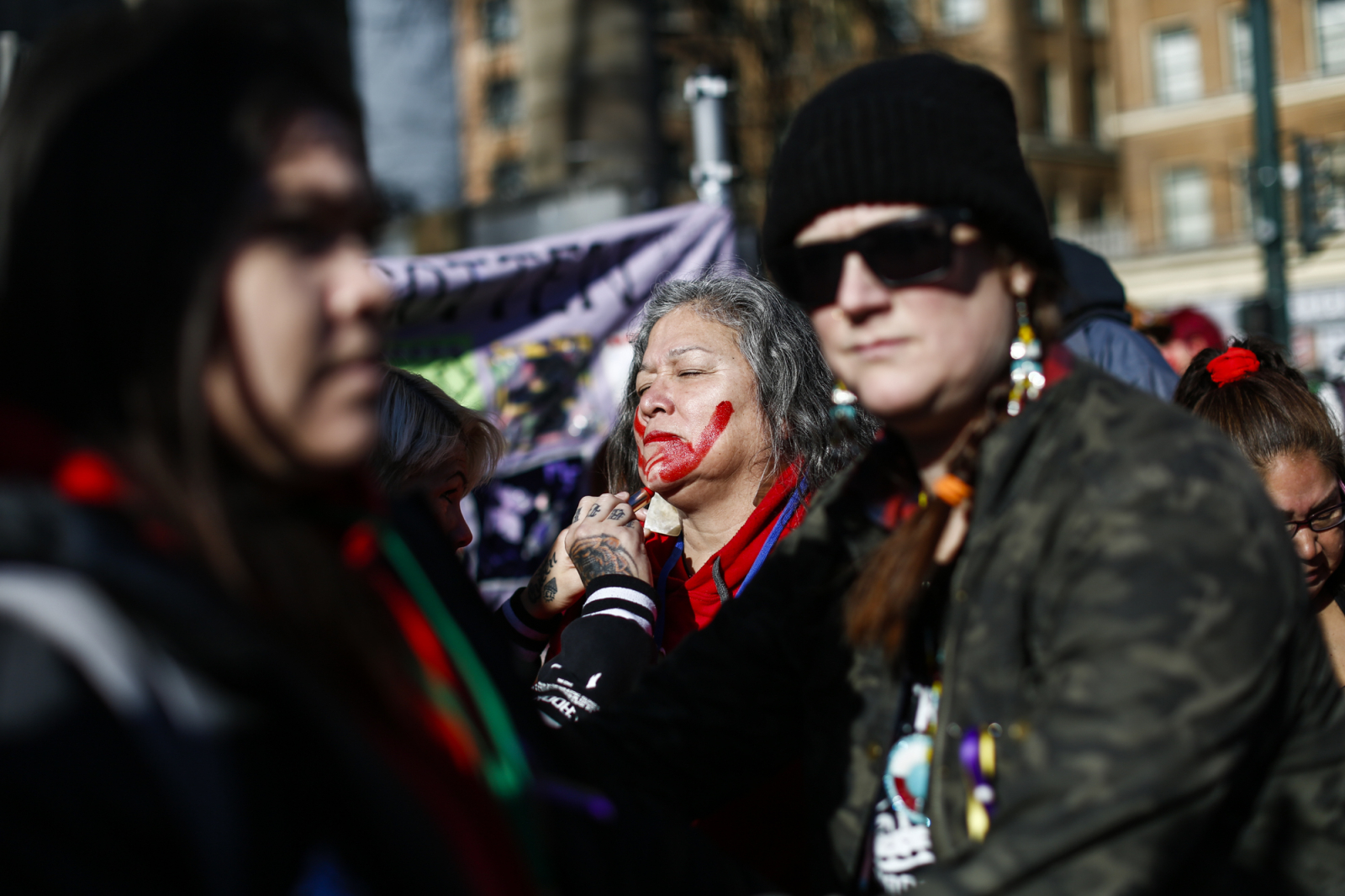 “We came to a decision collectively,” said Isabel Krupp, one of the blockade supporters. “We’re choosing to leave the site so we can be present at the 28th annual march for missing and murdered Indigenous women, girls and two-spirit people.”

The rail-line blockade ended after a tense afternoon and evening, with local politicians accusing Wet’suwet’en supporters of targeting the wrong people with their rail shutdown, inconveniencing thousands of commuters who rely on the rail service.

On Twitter, B.C. Public Safety Minister Mike Farnworth, who is also the city’s MLA, called it “unacceptable and a disgrace.” 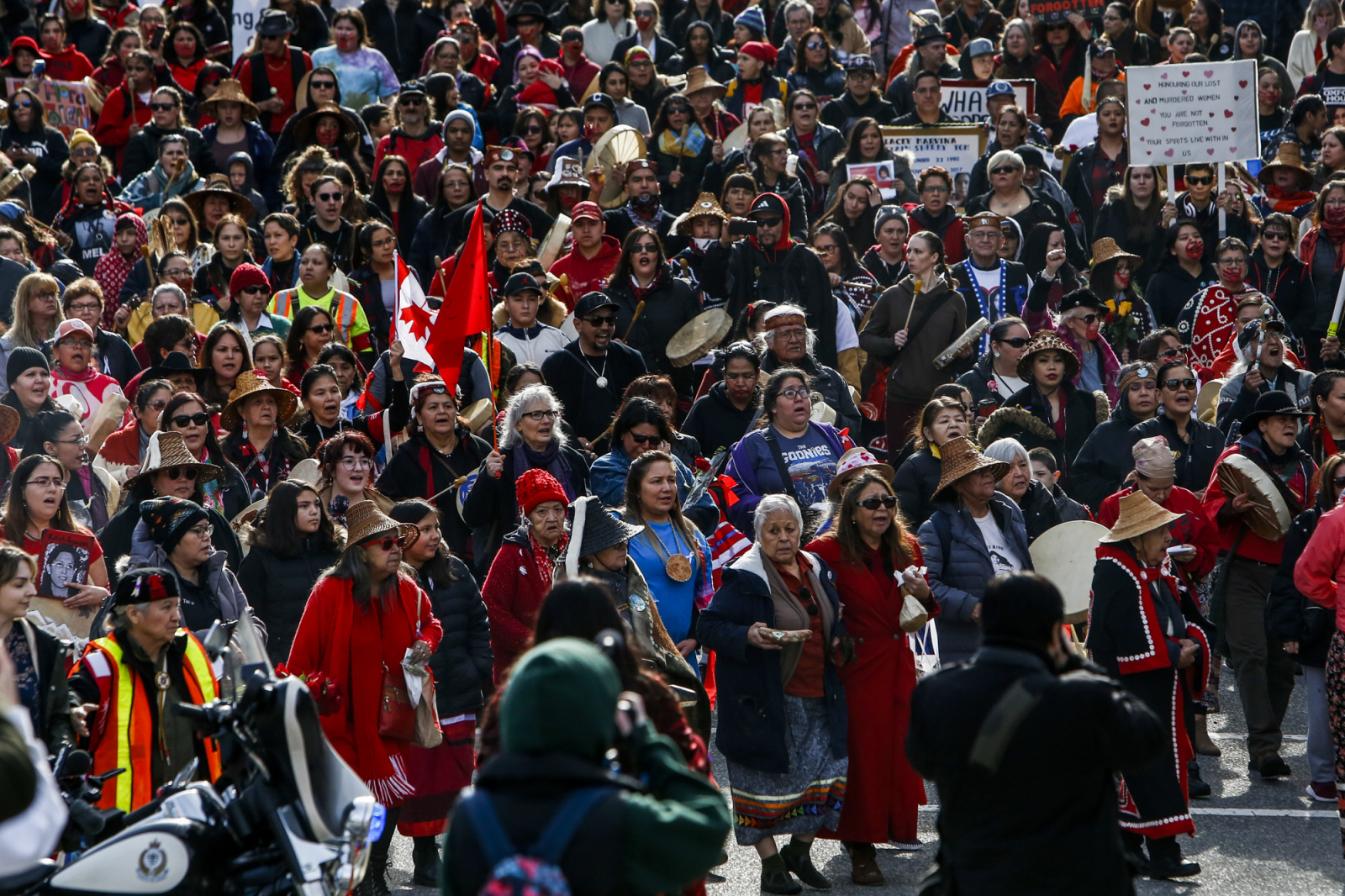 “This action has been aimed squarely at the working people of Port Coquitlam who depend on the West Coast Express to get to and from work,” West said Thursday afternoon on Twitter. “They’re the ones who are suffering, not a govt, company or politician.”

After removing their tents and other blockade equipment around 8:30 a.m., the Wet’suwet’en supporters returned to their vehicles to find someone had deflated their car tires overnight.

Wet’suwet’en supporter Skyler Murray said the decision to stand down the rail-line blockade was out of respect for the families dealing with the trauma that Friday’s annual march resurfaces.

“This in an effort to uphold the protocol and respect the people who are dealing with the significance of this day,” Murray said.

The march takes place every year in Vancouver, leaving after a medicine ceremony at the corner of Main and Hastings streets and winding its way through the heart of the city’s Downtown Eastside. It’s ground zero for the movement, and the area where for years police did little to investigate the disproportionate disappearances of Indigenous women and girls.

While Friday’s march was not part of the Wet’suwet’en solidarity movements, many see them as connected. 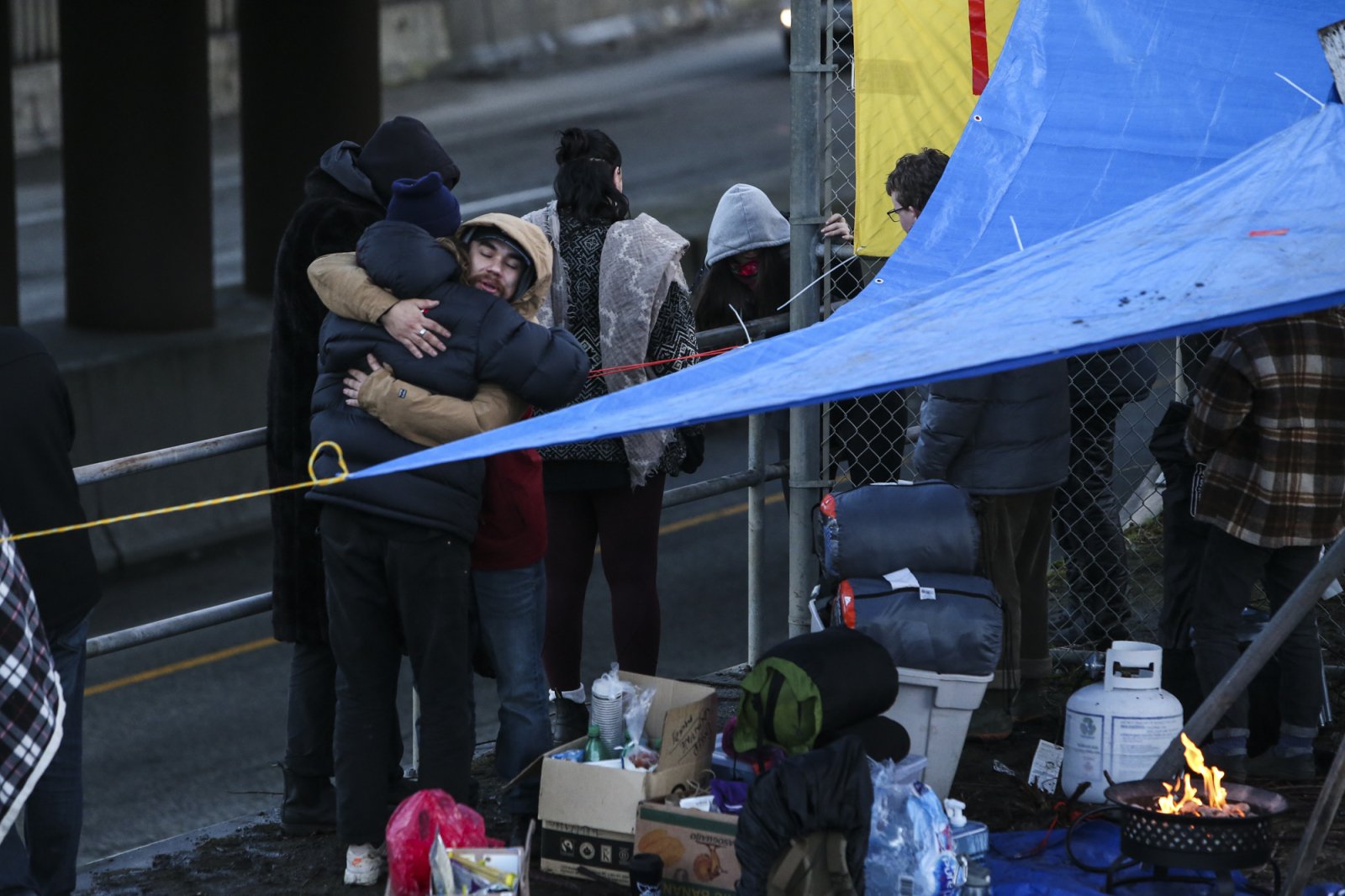 The National Inquiry into Missing and Murdered Indigenous Women and Girls found “substantial evidence” large resource camps full of mostly male workers can increase the risk of violence against Indigenous women and girls.

The presence of resource camps, or “man camps,” on Wet’suwet’en territory during construction of the $6-billion Coastal GasLink pipeline is a key concern of the hereditary chiefs who oppose the project.

Last week, as RCMP members advanced through Wet’suwet’en territory, they passed red dresses hung in trees and around land-defender camps along the roadway — each one a symbol of a missing or murdered Indigenous woman or girl.

The region around Wet’suwet’en territory in northern B.C. is also split by the notorious Highway of Tears, where many Indigenous women and girls have disappeared while hitchhiking.

At Friday’s march in Vancouver, Sut’Lut Antone — a Squamish Nation woman who said her daughter is one of the thousands who have disappeared — spoke about what she said is the need to oppose resource projects as a way of keeping Indigenous women and girls safe.

“We are pushed to do this, because we keep telling you we’re in trouble — our planet is in trouble,” Antone told a crowd gathered at Main and Hastings for the march.

“Hey-hey, ho-ho, man camps have got to go,” she cried, as hundreds of people in attendance echoed her.

Someone in the crowd shouted back that Friday was about missing women and girls, not pipelines.

“It’s the pipelines, too! It’s all related,” multiple people shouted back.

Heading into the weekend, things were relatively quiet in B.C.’s capital, Victoria, on Friday as well. Picket lines set up by Wet’suwet’en supporters around dozens of government buildings unfolded largely without incident.

With meetings expected between Wet’suwet’en hereditary chiefs, their neighbours the Gitxsan and the federal and provincial governments, the weekend presents a moment of rest in the pipeline crisis.

So Horgan mealy-mouthedly sidesteps UNDRIP ... that's got to be cynical and dishonest at the least.
Trudeau invokes "rule of law" despite himself having broken the law and claimed he "did nothing wrong."
The company "consulted" the neighbours of the people the pipeline went through.
I wonder what Messrs. H & T would think if the neighbours agreed the homes of the said Messrs. H & T should be demolished, having been personally paid by a demolition company to do so.
So one wonders, who is the RCMP taking orders from? I'd like to know why taxpayers are now on the hook for all the police presence?
Mr. T should get back to governing his country, and spill the beans about:
1. How the purchase price was arrived at;
2. Why the same buffoons are now building the pipeline, who couldn't see their way to do so before ...
3. How and why he decided to have taxpayers foot the bill for pipeline building delays caused entirely by the company's neglect and/or refusal to meet the conditions set by the old NEB.
4. Who in heaven's name told him that doing so was a good idea;
5. How much his party realized in campaign funding, from CAPP and its members.

Then Mr. Morneau shouild tell us exactly how much we've paid so far, for the old pipeline and the money it took to buy it (as in interest), how much the accumulated materials already purchased and labor costs for TMX have been expended to date, and most importantly, how much profit the people of Canada have realized from the purchase of the old pipeline.

I think they've misread the mood of the public. If they ever cared about it outside the pre-election period.