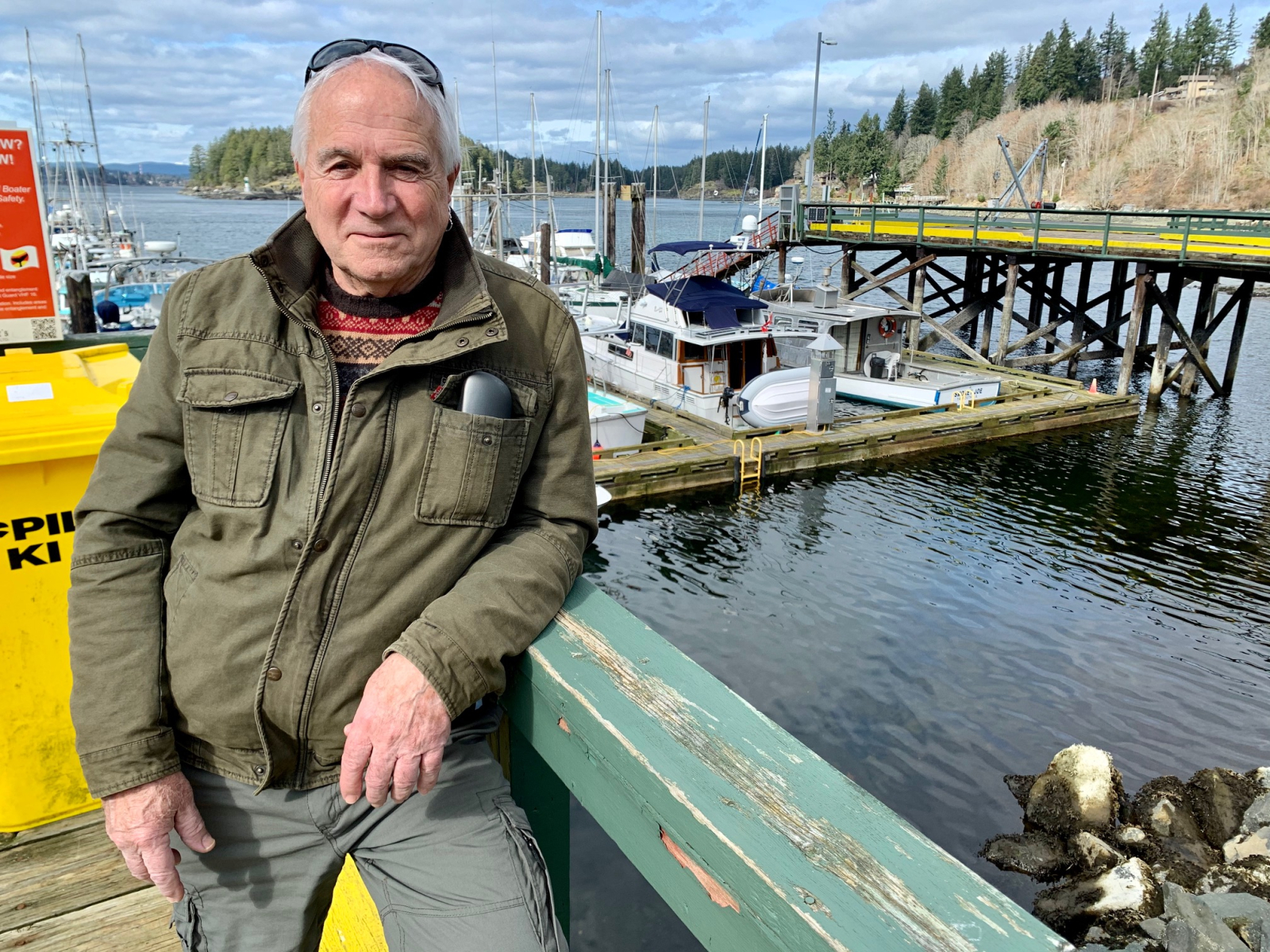 Jim Abram, Quadra's regional district representative, along with other community groups, is asking visitors not to come to the island. Photo: Rochelle Baker
Previous story
Next story

Quadra Island, a tourist haven off the eastern coast of Vancouver Island, B.C., is making a request to the visitors that usually flock there: please stay home.

Abram, the Discovery Islands Chamber of Commerce (DICC) and a We Wai Kai First Nation representative made the request in a statement issued Thursday. All the community groups and residents he conferred with supported the move, Abram said.

“I did lots of consultation with community leaders and the chamber of commerce,” Abram said, adding he received numerous emails calling for the move. “And they all said this is exactly what we need to do.”

“We need to limit the number of people on Quadra, and the people here to limit their stays, because (coronavirus) is extremely virulent.”

Despite the financial hardships on the island’s tourism sector and operators, it was wiser for visitors to defer their visits to a safer time, DICC president Lynden McMartin said.

“Quadra is a lovely place to visit, but just not right now,” McMartin said.

Quadra is a small island with only one resident doctor, limited RCMP officers and limited food, he noted.

“There’s enough of a strain on our infrastructure that we don’t need to be adding to it at this point.”

The decision to issue the plea to tourists was made in the interests of everyone’s safety, he said. Most chamber members were on board with the statement, save one who opposed due to the financial hit they would take, he said.

Quadra resident Kevin Elke respects the motivations behind the announcement, but doesn’t think it represents the viewpoint of everybody on the island.

“We need to limit the number of people on Quadra, and the people here to limit their stays because [coronavirus] is extremely virulent,” says Jim Abram, Quadra Island's regional district representative.

“I’m not questioning their good intentions. I just think they are assuming everybody feels the same way,” he said.

Elke has a short-term rental on the island, but says it’s vacant and likely to stay that way.

“It’s not a good time to do tourism, but I don’t think that decision was made by consulting a large percentage of the population on the island,” he said. He’s not on board with the call to ask visitors not to come to Quadra.

“It’s not just tourism you are discouraging, there are other situations that require travel to Quadra,” Elke said.

One example might be adult kids coming to live with their parents because they have lost their jobs, he said.

“Some people may have a compelling need to leave where they are, and are better served in coming to Quadra,” he said.

Philip Stone, owner of the Discovery Islander newspaper on Quadra, said he supported the call and was consulted.

Stone set up a Facebook poll on an island group site on Thursday morning, asking: should the Quadra Island community issue a public request asking visitors to avoid coming to the island?

By Friday morning, the poll indicated 150 people in favour and 34 against making the request.

“I did that (poll) of my own volition just to test the waters in the wider community,” Stone said.

“And I think the (press) release you see this morning is the result of that and wider conversations,” Stone said.

Elke voted against the idea of asking visitors not to come to the island, but nobody reached out to discuss it with him before issuing the public statement, he said.

“Of those folks who said on Facebook that they didn't agree … were any of them consulted to ask why they felt that way prior to issuing a statement on their behalf?” he asked.

“The aim is to reinforce what we’re hearing from Health Canada and the B.C. health officer, which is to adopt social-distancing and self-isolation strategies."

There’s concern some visitors believe it’s safer to be on Quadra rather than in larger centres, Stone said. But people are potentially endangering the community by coming from areas with higher rates of COVID-19 transmission.

“My concern is that our risk is amplified because people are coming from so many different places,” he said. “There’s a gap in awareness and that’s what we’re trying to address.”

“I think it’s evident throughout the world that everybody is taking these measures to minimize the impacts of this virus,” Duncan said. “We are a small island, and the obvious concerns are the impact it would have on our community.”

Other First Nations communities such as the Haida Nation on Haida Gwaii have already issued similar requests, he said, adding the public statement reflects what health authorities have been advising.

“That’s what we’re hearing and advocating. To only go out for the necessities,” Duncan said. “We just need to be prudent.”