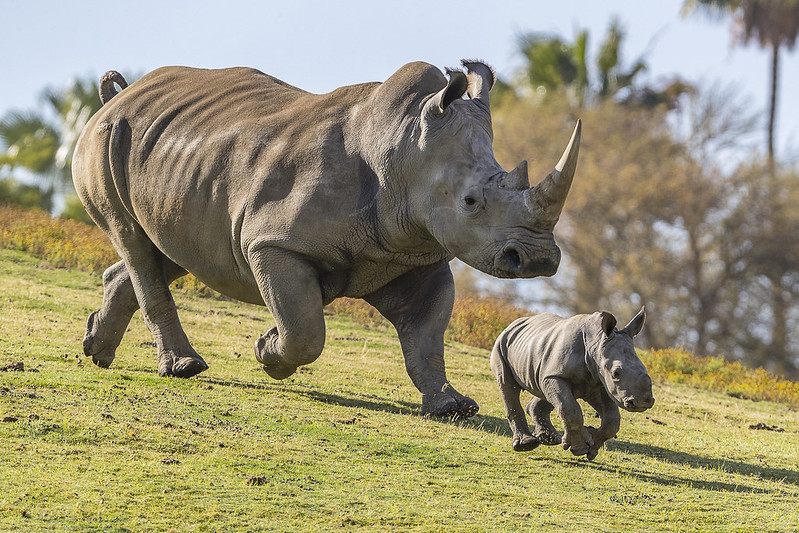 A female southern white rhino calf, gets all of her adorable four feet off the ground while romping in her field enclosure at the San Diego Zoo Safari Park, under the watchful eye of her attentive mother. Photo:Flickr/GPA Photo Archive (CC BY 2.0)
Previous story
Next story

It’s a trope from any movie about the end of humanity: Vegetation slowly reclaims cities, while deer and foxes roam the streets. Probably the closest we’ll ever get to this scenario without an actual apocalypse is happening right now in locked-down metropolises across the world. In San Francisco, coyotes—normally scared away by cars— are traipsing across the desolate Golden Gate Bridge. In the Welsh town of Llandudno, mountain goats are moving in. In Barcelona, wild boar have infiltrated the city center.

But while you might think a world without people would be great for animals, whether a species suffers or benefits from our absence depends on how dependent they are on human conservation efforts or upkeep of their habitat. The plucky coyotes and wild boar of the world will thrive in the absence of humans, for example. “We would consider a coyote a ‘generalist,’ meaning that they are adaptable and can eat a wide variety of things in a wide variety of places,” says conservation biologist David Steen, reptile and amphibian research leader at the Fish and Wildlife Research Institute. “This doesn’t describe all species, however. ‘Specialists’ require specific foods or environmental conditions, and the specialists are the species that are generally of conservation concern.”

So for example, a honeybee is a generalist that visits a wide variety of flowers for food, while a sunflower bee is more of a specialist. Honeybees are comfortable all over the world, while the Gulf Coast solitary bee sticks to dune habitats. But a restricted range or food source—or both—makes life precarious in the age of widespread human meddling: Lose your habitat, and you have nowhere else to go. And this is a particular danger when the people who used to protect your habitat are no longer able to go outdoors.

This is often the case in Africa, where a massive ecotourism industry funds conservation efforts. In Namibia, tourism accounts for 16 percent of employment; in Tanzania, which is home to Mount Kilimanjaro, protected lands cover over a quarter of the country’s total area. But nearly overnight, those tourism industries have declined, and will likely stay shuttered through September at least, according to the Nature Conservancy. With them go the salaries for the security guards who protect animals from poachers. Facing massive unemployment, people in the tourism industry may themselves turn to poaching to feed their families.

“Anything with a horn right now, like rhinos, is at risk of being poached,” says Matt Brown, Africa regional managing director for the Nature Conservancy. “The concern is that we're going to lose the last 10 years of good conservation work—and an increase in animal numbers—quickly because of this.”

It’s not just the cratering of the ecotourism market that could exacerbate poaching. In Kenya, a big industry that provides flowers to the Amsterdam flower market just went under, taking with it 7,000 jobs. “Those 7,000 people, they're going to be hungry. They're going to be looking for things, and there's rhinos right next door,” says Brown.

A similar problem is about to confront island habitats around the world that also depend on human conservation efforts. When humans arrived on islands, they brought with them invasive menaces like rats, which can wreak havoc on native species that often aren’t adapted to dealing with mammals. Ground-nesting seabirds, for instance, are particularly vulnerable to rats hungry for eggs. “Some species, particularly those on islands, are now reliant on ongoing efforts to remove invasive species,” says Steen, of the Fish and Wildlife Research Institute. “If we disappeared, you might expect populations of things like rats to explode on various islands, to the detriment of seabirds.”

Conservation groups have gone so far as to lock down certain islands to restore them—no people in and out other than scientists. But without humans available to patrol the islands during this pandemic, this could again be the opportunity poachers were waiting for. Alternatively, any sailor who takes advantage of the lack of security to land on these islands to explore might unwittingly bring rats with them in their vessel.

Not being able to go to the lab, too, is hobbling conservation work. Island conservation often requires genetic analyses to determine if, say, two kinds of birds are genetically distinct, or if they’re actually the same species. If they’re the same, a conservation group might repopulate an island with birds transported from another island. “We go out, we collect samples, and then we bring them back to the laboratory where we can do genetic analysis, trying to figure out how to manage populations,” says Jack Dumbacher, curator of ornithology and mammalogy at the California Academy of Sciences. “When you can't get in the lab, it just takes longer to get your answers.”

The Coronavirus Lockdown Is a Threat for Many Animals, Not a Blessing

It’s also making it harder for conservationists to do field work. In the fall, Dumbacher and his colleagues monitored controlled burns in a long-term study to see how California’s wildfires might affect bird populations. “So this is a really critical year, because we've had three years of pre-fire data,” says Dumbacher. “And now is when we need to get out there to see how animals are responding to the fire.” But now the team is trapped at home. Other bird scientists elsewhere are seeing their research crippled at a terrible time: This is the time of year when migratory birds return from their winter away.

The California Academy of Sciences also works along the coast to monitor the number of dead whales, seals, and other marine mammals that wash ashore in Northern California, which helps them track diseases like the bacterial infection leptospirosis, which sickened hundreds of sea lions in 2018. They rely in large part on volunteers to roam beaches and report initial, basic data about the carcasses like which species are being affected, and if there’s any noticeable cause of death, like a wound from a ship strike. Academy scientists then arrive and do necropsies to confirm the cause of death.

“Our ability to kind of take the pulse of the health of the oceans basically comes from what we see washing up dead on the beaches,” says Dumbacher. “That’s how we study what diseases are going through populations.” That data also informs how officials might modify shipping routes in and out of the Bay Area to protect these giants. But that data has now dried up.

Wildlife conservation efforts are often urgent, and rely on seasonal timing. But if the pandemic ends up lasting 18 months or longer, as experts are now warning, that might be much longer than the animals can wait.