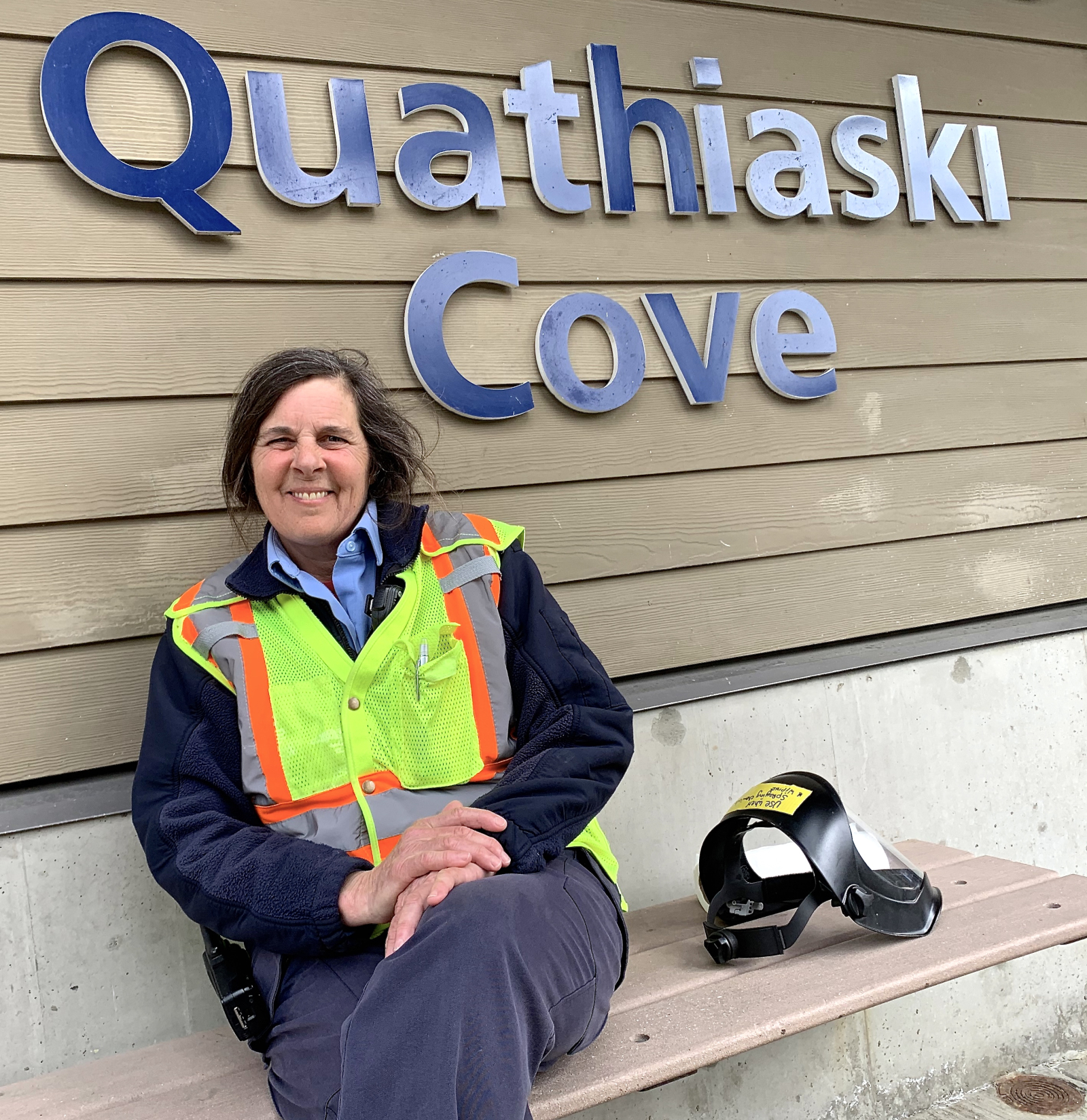 BC Ferries employee Helene Lepage is one of the essential workers keeping coastal communities supplied during the COVID-19 pandemic. Photo Rochelle Baker
Previous story
Next story

Besides being on alert and feverishly working to stem the spread of germs, COVID-19 is cramping BC Ferries worker Helene Lepage’s style.

“I can’t sing at work anymore,” Lepage said with a wistful laugh. “I’m in theatre. And, no kidding, you can throw spit 25 feet away, easily, with a passionate soliloquy.”

The outgoing, gregarious terminal attendant on Quadra Island has had to rein it in during this new era of physical-distancing.

“It’s difficult for me to withdraw and not interact as much as I would like to with people,” she said.

Lepage — and all BC Ferries workers in public service at terminals and on vessels — have abruptly found themselves as front-line workers in this global pandemic.

For Quadra and Cortes islands ­— and many other isolated coastal communities in British Columbia — a ferry is often the sole practical link to the outside world and a driver of the local economy. BC Ferries operates 25 routes with 35 vessels that cover 1,600 kilometres of coastline and 47 ports.

Ferry-dependent communities like Quadra and Cortes rely on the vessels to transport essential goods, services and people more than ever, Lepage said.

“It’s the lifeblood of these islands. Without it, we would crash out,” said Lepage, a longtime Quadra resident. “Traffic goes both ways. Doctors and nurses come on and off the islands, and some people (on Quadra) work in nursing homes in Campbell River.”

“We are part of a machine that keeps the islands fed and supplied," says essential worker terminal attendant Helene Lepage of BC Ferries during the COVID-19 pandemic.

During the summer season, up to six attendants oversee the two BC Ferries terminals at Heriot Bay and Quathiaski Cove.

It’s probably no surprise to any islander that local ferry employees are deemed essential workers by the province during the COVID-19 crisis.

“We are part of a machine that keeps the islands fed and supplied," said Lepage.

In addition to helping keep the islands connected, Lepage is now in constant motion to curb the spread of the virus at the terminal, as are her co-workers on the vessels.

The moment cars are loaded and the vessel departs, Lepage dons a shielded helmet, pulls on blue latex gloves and gets to work cleaning washrooms, the waiting room, and any other high-contact touch points at the Quathiaski Cove terminal.

“It’s just all about sanitizing all day. That’s what we do,” Lepage said.

​​​​​New cleaning protocols are in place to protect the public as much as possible, but they’re a self-preservation measure for BC Ferries workers, too, Lepage said. It’s imperative that staff members don’t get sick and endanger the ferries’ ability to run, she added.

Yet workers are still facing some resistance to the measures being put in place to stem the virus, she said.

“It’s a small percentage of people. Most people are conscientious and give us the 'thumbs up' and thank us for being here,” Lepage said.

“But some argue with us if we ask people to maintain social distancing.”

She said that some people respond that they don’t think the virus is that big a problem, that everybody is overreacting, or they don’t like people telling them what to do.

People spitting in the waiting room, washrooms or on terminal grounds is probably the most egregious example of disregarding the dangers of COVID-19, Lepage said.

“At this point, how someone could not take (the virus) seriously is amazing to me,” she said. “We have to act like it’s everywhere.”

Vancouver Island had its first two deaths recorded from COVID-19 in hospital in the Victoria area, on Thursday.

On Friday, another four COVID-19 deaths are confirmed, for a total of 35 deaths in B.C., said provincial health officer Dr. Bonnie Henry.

A total of 1,174 cases of COVID-19 are now confirmed in the province, with 641 people recovered, Henry said.

Twin dangers of COVID-19 and lay-offs

On Friday, BC Ferries announced major rollbacks in service due to COVID-19.

Capacity levels will be cut by half across the fleet, CEO Mark Collins said Friday.

Most of the service cuts affect major routes connected to B.C.’s Lower Mainland and will start Saturday for 60 days.

For Quadra and Cortes islands, and other northern and mid-coast communities, ferry service will continue to at the current winter service levels for the time being.

Before Friday’s announcement, on March 24, BC Ferries issued a call for people to avoid non-essential travel.

Across the fleet, there has been a 70 per cent to 80 per cent drop in passenger and vehicle traffic due to COVID-19, BC Ferries spokesperson Deborah Marshall said Thursday.

On minor routes, such as Quadra and Cortes, passenger traffic is down about 60 per cent and vehicles traffic is running at 50 per cent, she said.

The reduction in sailings also means some BC Ferries workers will lose their jobs.

There will be layoffs for hundreds of dedicated and loyal employees, said Collins.

“Our goal is to keep the temporary layoffs to as short as possible,” he said. “We need all these skilled people back as soon as possible to help restore ferry services when traffic returns.”

Lepage anticipates there will run reductions and layoffs for smaller routes like Quadra and Cortes, too.

Lepage is confident BC Ferries will maintain service levels that will keep the islands supplied.

“They’re mandated to maintain a certain level. They won’t cut (the islands) off.”

Any local layoffs would be temporary, Lepage thinks.

“They’ll do what it takes to weather us through this,” she said. “Especially in the summer, they’ll bring us back on when things get back to normal.”

Despite the fear of layoffs, Lepage is still encouraging people to avoid travelling unless it was really necessary.

“We’re all just really trying to minimize the spread of the virus and could use the assistance of the public ... to only travel if it’s truly essential.”