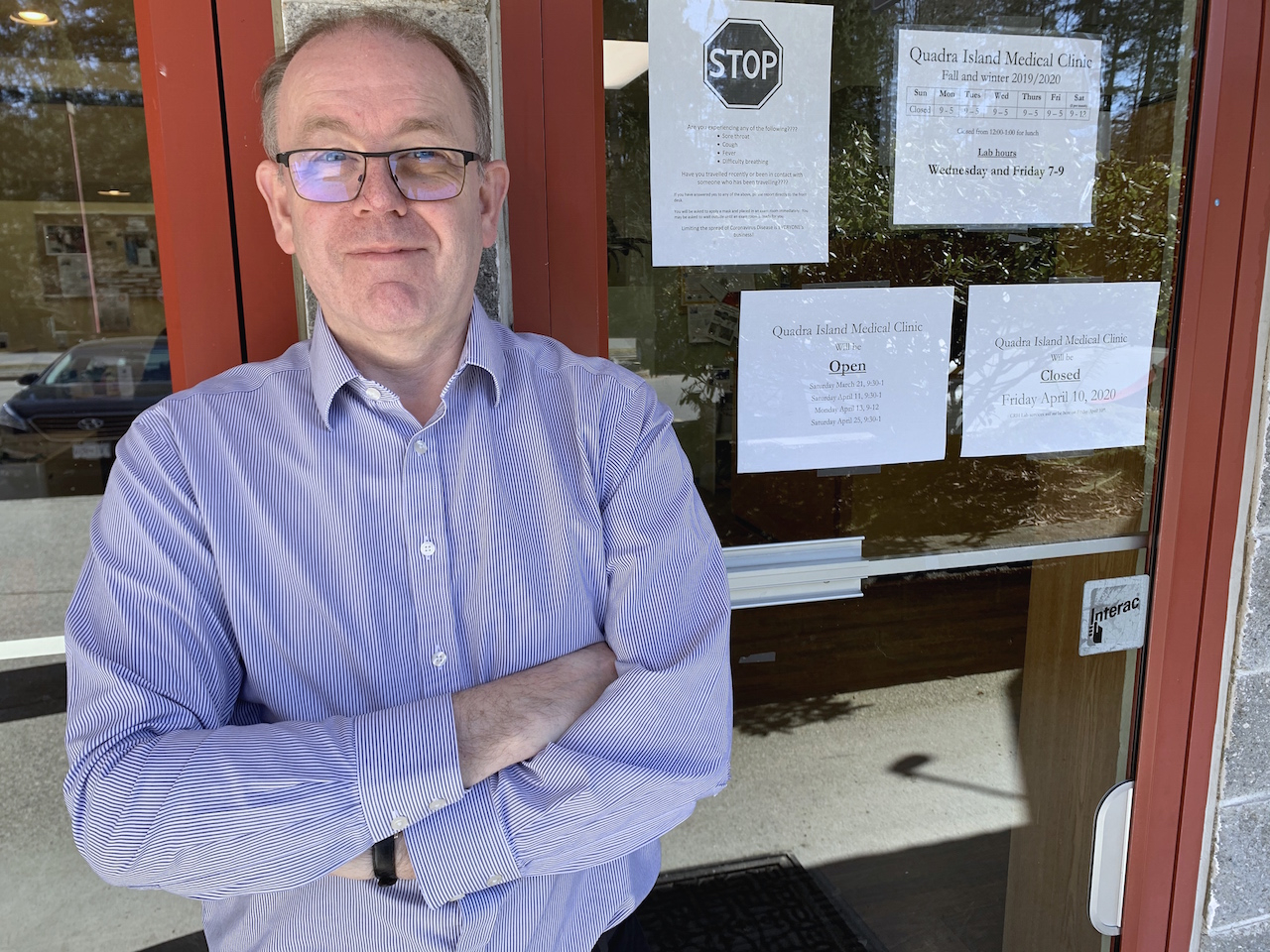 Island residents with cold or flu symptoms can now be tested for COVID-19 as B.C. health authorities shift their focus to fighting community spread of the virus and identifying and investigating new clusters.

The province’s testing strategy has expanded to include anyone with cold or influenza-like symptoms, however mild, the Island Health authority announced Tuesday.

Island Health, one of five regional health authorities in B.C., covers Vancouver Island, adjacent island communities, such as Quadra and Cortes islands, as well as a section of B.C.’s central coast.

Previously, testing in the province was limited to health-care workers, residents and staff at long-term care facilities, people who were seriously ill with respiratory symptoms and people who were involved in a cluster of cases.

“I think it’s a good step. Countries that have done well against the virus did widespread testing, but the problem in B.C. previously has been having the resources to do it,” said Hughes.

“But, hopefully, now we’ll have a clear idea of who has got it in the community.”

B.C. has conducted a total of 83,425 tests, for a per capita testing rate of 14,042 per million people, according to figures as of Wednesday afternoon.

That was significantly below the reported national per capita rate of 20,176 per million people.

Within the Island Health region, there have been 12,259 total tests to date, with 433 new tests reported on Wednesday.

​“I want to reiterate, we are changing and modifying ... based on the circumstances we have in British Columbia and our testing strategy will continue to evolve," B.C. health officer Bonnie Henry on easing limits to those getting COVID-19 testing.

The B.C. testing regime has shifted as the pandemic progressed in the province.

In March, during the initial weeks of the crisis, provincial health authorities, in part to conserve limited testing supplies and resources, focused on source transmission by testing travellers returning from countries with known outbreaks.

As community transmission of the virus began, B.C. began prioritizing tests for people at highest risk, such as health-care workers and people with underlying health conditions.

​“I want to reiterate, we are changing and modifying ... based on the circumstances we have in British Columbia and our testing strategy will continue to evolve.

“We have taken an approach of having very broad testing in those types of environments to make sure we catch everybody, even people who have very mild or no symptoms at all.”

However, Henry stressed widespread testing in general is not a reliable mechanism to understand what is happening in the wider community.

“Random testing in the community of anybody with no symptoms is of very little value to us with the current tests that we have,” Henry said. “In fact, that type of testing leads to both false positives and false negatives.”

As such, with the new protocols, people won’t be tested unless they demonstrate COVID-19 symptoms similar to the cold or flu, such as chills, sore throat, runny nose, nasal congestion, pain when swallowing, loss of the sense of smell, headache, muscle aches, fatigue and loss of appetite.

“If people don’t have any symptoms, they don’t need a test,” stressed Hughes. “It’s only for people who are ill.”

Individuals who are tested but who get negative results shouldn’t think they are immune from having to follow pandemic protocols, said Hughes.

It’s not uncommon to get a false negative with a test, he noted.

“I’m always a bit wary of negative swabs,” Hughes said. “You can’t always rule out infection … if someone has got symptoms with a negative swab, they still need to keep social distance.”

Quadra and Cortes residents must get referrals for testing through their doctor, said Hughes, or failing that, contact Island Health’s Call Centre at 1-844-901-8442 to be assessed.

People cannot just show up at medical clinics or collections centres to get swabbed without appointments, Hugh stressed.

Testing centres across the Island Health region vary by community. Some are drive-through centres, others are based in trailers or in repurposed buildings.

The nearest Island Health collection centre for Quadra and Cortes island residents is in Campbell River. The centre is in a tent adjacent to the Campbell River Hospital emergency department and is set up as a drive-through operation.

Anyone with symptoms of illness is being asked to put on a mask before entering any Island Health facility for testing.

Patients can call the clinic to discuss symptoms and book a time to get swabbed in their cars on Wednesdays or Thursdays, so the samples can be taken off island Fridays when the laboratory technician visits.

Cortes Island patients also have some access to testing at the Cortes Health Centre. People must phone the clinic first and speak with a doctor before being allocated an appointment for swabbing outside the clinic on Monday or Wednesday afternoons.

Dr. Keith Graham of Harbourside Medical Clinic on Quadra said patients can call the clinic to be evaluated and referred to the Campbell River collection centre.

However, Graham noted that health-care workers or people who work indirectly in health care, in areas like food preparation or cleaning services, can self-refer and book an appointment through the call centre.

People who are referred to a centre for a test will be given necessary instructions at that time.

Public health authorities will follow up with people and their families to conduct contact tracing if a test comes back positive, Hughes said.

With flu season on the wane and overall indications that the COVID-19 curve is being flattened in the province, Hughes doesn’t anticipate there will be rush by Quadra residents to get tested.

“Hopefully we will see less and less people with symptoms now,” he said.

His clinic has only done one or two swabs since the change in testing protocols took effect, Hughes said. And given prior restrictions around testing, and since Quadra has no reported clusters of the virus, only a handful before that, he added.

On Wednesday, B.C. reported 34 new cases of COVID-19, one of which was reported in the Island Health region, for a total 2,087 cases to date.

Of that total, 120 have been in the Island Health region.

Four new COVID-19 deaths were reported, for a total within the province of 109 fatalities. Four of those confirmed deaths have occurred in Island Health.

Of those who tested positive for the virus, 1,305 people have fully recovered, 90 of them within Island Health.

There are currently five people hospitalized in the region due to the virus, but none are reported to be in intensive care.

But the number of tests and the COVID-19 case tally across the province and in the community do not represent the whole picture about the prevalence of the virus, Hughes cautioned.

“Those numbers are just the tip of the iceberg,” he said.

“The safest thing is to continue assuming everybody is at risk of catching the virus, but not everybody will be terribly unwell.”

People experiencing a medical emergency should call 911 or go to the nearest emergency department.