The strongest movie yet about social media, a Canadian whistleblower, and a good rom-com 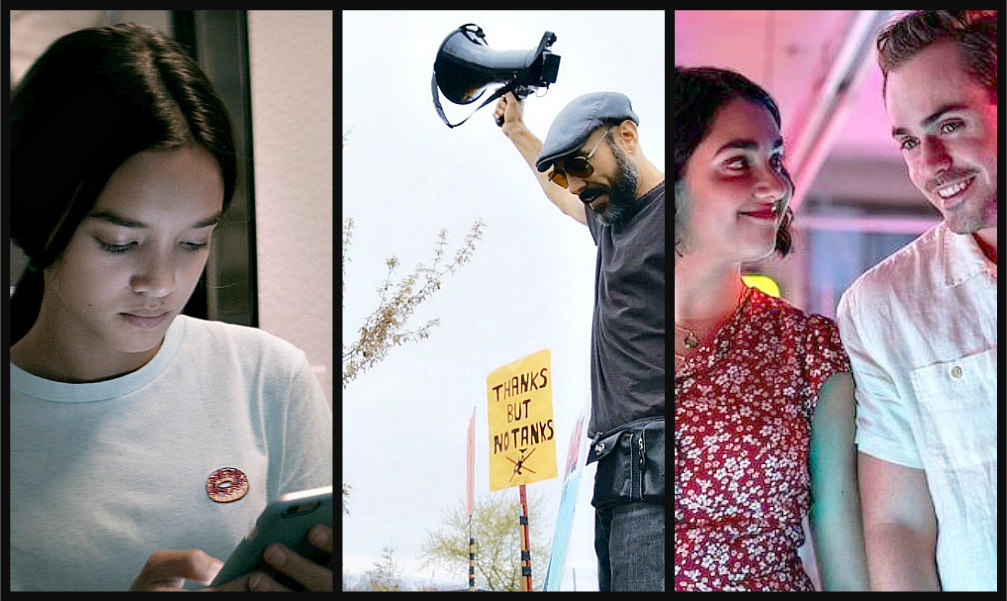 It’s festival time again. Toronto’s is now on and getting lots of newspaper attention. Vancouver’s is still two weeks away, but issuing frequent updates on its films. Most of them will be streaming and available at a good price: just $9 each. Or you can watch an unlimited number if you buy what they call a “subscription” for $60 ($30 for students). That’s a good deal.

There are more details, including descriptions of every film, at https://viff.org

Meanwhile, the much smaller Vancouver Taiwanese Film Festival starts today. It's showing eight films that reflect the culture of that nation. One dates back to 1961; another is new, about an aspiring actress; a third is about sound effects technicians. I haven’t been able to track down the rest. You can try at http://www.twff.ca/2020/

And the new films for this week are:

The Walrus and the Whistleblower: 3

THE SOCIAL DILEMMA: We’ve seen critiques of social media before. Not as strong as this one, though. Facebook, Twitter, Goggle, YouTube, et al., are addictive because they’re designed to be that way. We’re all lab rats to them. Zombies lured to look at more ads. Those are not words from some wild-eyed nutbars, but from people who worked in the industry. The man who invented Facebook’s “like” button is here. People who were in charge of “growth” and “monetization” at various companies. They talk about how the industry was doing good when it started and then built a parallel money machine. “Surveillance capitalism,” they call it, “by the richest companies in the history of humanity.” Scary stuff because by collecting data and watching everything we do online, they know more about us than we do, and they can predict what we’re going to do.

People are addicted to social media and their smartphones. Many are susceptible to depression because of it, as shown in recent studies that the film cites. It goes much further: conspiracy theories, fake news (including about COVID-19), vicious personal attacks are all flourishing. One commentator sees a potential for civil war. That’s one of the more alarmist comments. Most are reasoned and logical from those who left the industry or watch it as academics and authors. The main voice, Tristan Harris, ex-Google now head of the Center for Humane Technology, makes a good case for worrying. (Telus should listen, too. It's moving all its e-mail customers over to Google.) There are animated and dramatized scenes to illustrate some points, including actor Vincent Kartheiser playing the algorithms behind the screen. It’s a gimmick, but does show that they’re not at all neutral and objective. What can we do? The film has suggestions, but not until the very end, beside the closing credits. Worth watching? Absolutely. (Netflix) 4 out of 5

THE WALRUS AND THE WHISTLEBLOWER: Just like the ex-Silicon Valley types who turned against their industry, Phil Demers blew the whistle on whales and other mammals being held in captivity. His target was Marineland in Niagara Falls, where he said animals were being mistreated (there are grainy clips of sad-looking creatures). Even at the best of times, he says, there’s just one technique that’s used to train them: food deprivation. He quit his job there as a trainer and became a campaigner against such places. Eventually, he helped get the Senate to pass a law that bans holding whales and dolphins and such in captivity. The Vancouver Aquarium would have been affected, too, but voluntarily stopped the activity before the law was passed.

The film follows the troubles Demers went through along the way. While he was still at Marineland, a baby walrus “imprinted” on him, in effect thinking he was its mother. After he left, Demers wanted to save the animal and demanded it be given to him. What would he do with a walrus? The film doesn’t question that. The park responded by accusing him of trying to steal it. Lawsuits flew and went on for years. It’s a fascinating story told largely through his own perception and with no apparent challenge from filmmaker Nathalie Bibeau, who has known him since childhood. The cause is good, though, and the film gives the facts and the commitment. (Rio Theatre on Friday and Monday evening.) 3 out of 5

THE BROKEN HEARTS GALLERY: It’s partially Canadian and that qualifies it for a shelf of rarities. A Canadian romantic comedy that’s actually entertaining. Yes, there are a lot of Americans in it, and Selena Gomez is one of the producers, but it was filmed in Toronto, with Telefilm Canada chipping in money, and that’s Sheila McCarthy in a brief role. But the star (and sure to be widely heralded) is Geraldine Viswanathan, Australian born, previously declared a break-out star in the film Blockers and quite a revelation again here. She’s witty and endearing, which is exactly how I hear the dialogue in this movie.

But it is a rom-com, so you have to forgive the premise written and directed by American TV scribe Natalie Krinsky. She imagines a woman so unable to move beyond failed relationships in her past that she has a collection of trinkets from each. A tie or a pin or something. A pair of roommates call her a hoarder and generally act like a Greek chorus throughout the film with wry comments that add to a bouncy feel along the way. The way involves a bumbling speech at the art gallery where she works and a crying escape in an Uber car, which isn’t one at all. It’s a private one driven by a nice guy (Dacre Montgomery), who gives her a ride anyway. They meet again, wouldn’t you know. He’s renovating a small hotel; she convinces him to turn one wall into a gallery of broken heart trinkets like she collects. It gets noticed and takes off. So does their relationship until … well, complications. Like all rom-coms. This one is sunny and sparkles in both its writing and acting. (Scotiabank, Marine Gateway, Park Royal and nine other suburban theatres) 3 out of 5

Note: There’s another new romance out there in several theatres, but After We Collided was not made available for review. That’s never a good sign.

CUTIES: Netflix almost killed this film with a bad advertising move that brought accusations that it sexualizes young girls. Not so. It is a sensitive, but rambunctious, view of growing up today, as experienced by an 11-year-old in Paris. Amy (full name: Aminata) is trying to find her way out of the confines of her immigrant family from Senegal. Her aunt and mom are pious and strict and dad is off and expected back soon with a second wife. (Filmmaker Maïmouna Doucouré is of that ethnicity herself, so presumably this is credible. She won an award at Sundance for directing it).

Amy is trying to get in with the cool kids at school. Through her friendship with a girl in the neighbourhood, she joins a quartette of girls trying to win a dance competition. It’s there that the sexualization charge arises. The girls, calling their group “the cuties,” twerk their performance, obviously mimicking what they’ve seen in videos and such. The film is trying to show how easily they pick up that behaviour without really understanding it. The director thinks young women lose their childhood far too early and gives us several scenes that show how they behave as innocents. Also, how even at that age they already claim to know a lot but how much of it, particularly about sex, is misinformed. It’s an authentic depiction of young girls of that age and features a superbly natural performance by Fathia Youssouf as Amy. It’s a bit too realistic though to show to girls her age. (Netflix) 3½ out of 5

I AM WOMAN: Helen Reddy was no one-hit wonder, though it sometimes seems so. One year, she had three No. 1 songs, but most of us only remember I Am Woman. It was anthemic, a crowd rouser and is often cited as a rallying cry in the women’s movement of the 1970s. Maybe for some. Other women who were involved at the time dispute that. Nevertheless, this biography of the Australian singer is worth your attention for the information it passes on. And for a shining performance by Tilda Cobham-Hervey as Reddy.

Other than that, this is a standard bio-pic with the same story arc most of them have. Reddy comes from Australia to New York, meets and marries a man (Evan Peters) who becomes her agent, gets a career with his help, but has a falling out because of his drug use and trying to claim credit for her success. The best parts show the resistance of record company executives who thought her song sounded “too angry” contrasted with the enthusiasm of women who found it resonated with their own lives. A parallel thread of Reddy not wanting to be limited to a life as a housewife felt too much like pontificating. The final scene, at a women’s march, is emotional and moving, but also not unexpected. (Now available digitally and on demand) 3 out of 5

THE TAX COLLECTOR: There are artistic flourishes to dress it up, but at heart, this is just another display of threat, intimidation and then violence. There’s lots of that. They even throw in the bathroom sink. If that’s what you’re in the mood for right now, come on in. There’s an edgy, jittery ambience and a pretty good story, though at times it’s confusingly told. The director is David Ayer, who wrote about this segment of society before in films like Training Day.

It’s set in the Latino community in Los Angeles. Shia LaBeouf and Bobby Soto play a pair of hoods who work for a boss called The Wizard collecting what they call taxes from criminal gangs. Really it’s protection money, that racket we’ve seen in gangland films for decades. Shia threatens a guy with a power drill and explains he’s a product of evolution. “I terrorize the herd. That’s what I’m good at,” he says. The script likes grand statements like that. The story amps up when an old rival of The Wizard returns to town and tries to take over with tactics that are even more brutal. The film adds in flashback memories, scenes of family life and declarations of noble intentions, even a speech about God and the universe. But we know what it really is. (Video on demand) 2 out of 5