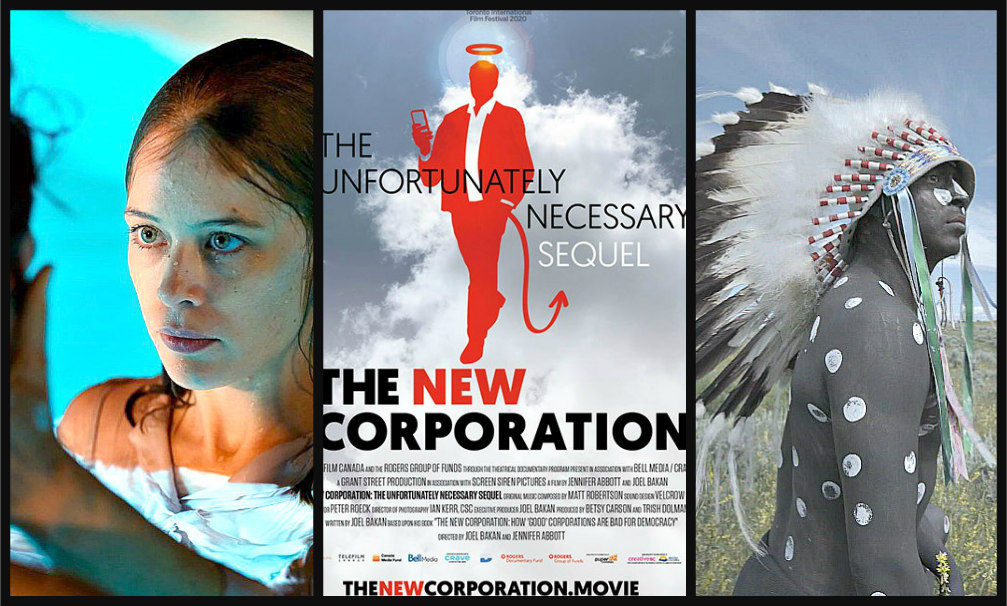 Also another humanistic film from Iran, and genre fun from Vancouver.
Previous story
Next story

Here are my latest picks to call up from the Vancouver International Film Festival. They’re all available for streaming, but watch for the few also getting theatre screenings. They’ll be at the Vancity Theatre and the Cinematheque, both theatres showing them at the same time. For details on that and information on how to stream, check out https://viff.org/

My reviews today are of:

The Curse of Willow Song: 2½

UNDINE: That’s four films in a row now that I’ve liked very much by German director Christian Petzold, although I must admit this one is somewhat vague in what it’s trying to say. Petzold likes to weave current political concerns into his stories. His last one, Transit, was about refugees and migrants. There’s nothing as clear this time as he parallels a version of the old German tale of a water creature’s tragic love affair with the building and rebuilding of the city of Berlin. The metaphor seems to say something about part of the old persisting when you replace it, but that intellectual level is out of step with the love story that’s the heart of this movie.

Paula Beer and Franz Rogowski, the two lovers in Transit, co-star again, having met almost immediately after she was dumped by her boyfriend. True to her Undine-myth character, she had responded with a threat: “If you leave me, I’ll have to kill you, you know that.” She doesn’t, but goes to her job instead lecturing visitors at a scale model of Berlin about the city’s development. We see three or four long sessions of that, a sign that it must be important. The love story develops around it. Her new man is a diver. At their first meeting, an aquarium in a restaurant shatters and splashes all over them. That signifies that she’s a water creature, which the film expects people to understand from their familiarity with the old tale. Most of us may not, and as a result, wish for more explanation. Obscure or not, it’s an exceptionally well-made film, quite mesmerizing and with real chemistry between the lovers. Beer won a best acting award for it at the Berlin Film Festival. (Streaming now by VIFF Connect and also in theatres Sunday, Tuesday and Thursday.) 3½ out of 5

THE NEW CORPORATION: Some 17 years ago, UBC’s Joel Bakan and filmmaker Jennifer Abbott psychoanalyzed the modern corporation and concluded it is a psychopath, concerned only with its own benefit. In this “Unfortunately Necessary Sequel,” they take another look and find things have gotten worse. They add to the pathologies they listed back then and find them doing more damage than ever before. Sometimes it’s under cover of a public image of promoting good. BP oil endorsed the need to fight climate change and then had a huge ocean drilling disaster. JPMorgan claims praise for how it responded to a recession it helped cause. Tax havens continue and income inequality has become extreme for ordinary people.

Some argue that “corporations are conscientious now.” A lineup of high-powered observers like former U.S. labor secretary Robert Reich and journalist Chris Hedges disagree. Serving shareholders first hasn’t changed as the top priority. Accepting Donald Trump’s tax cuts while endorsing more military spending doesn’t seem a contradiction to some CEOs. The film tours interesting examples internationally, such as privatized water systems, private health care, private prisons, potentially also parks and more schools. It brings in COVID-19, but is hazy on how corporations can be blamed there. Surprisingly, after the bleak central focus, it finds some optimism. A young generation of progressives is getting involved. Hope so. The alarming, fervently argued analysis here needs some lightening. (VIFF Connect now and theatres this Thursday and next Friday.) 3½ out of 5

INCONVENIENT INDIAN: In B.C., where Indigenous issues are constantly in the news and on our minds, there’s not much new for you here — if you’ve been paying attention. But the film brings it all to life. It‘s a lively, speedy and passionate overview of the history and bitterness of Canada’s Indigenous people as expounded in Thomas King’s book and now on film by Michelle Latimer.

King occasionally narrates and that’s him you see in a movie theatre watching some old Hollywood representations of Aboriginals. From cowboys and Indians, and even earlier Nanook of the North, to modern scenes at Oka and, I think, Ipperwash, the film has evidence that validates the anger many feel. Sometimes the complaint is about misrepresentation; often it’s about attempts to assimilate them. Residential schools were the most extreme stab at driving the Indian out of them. In answer, the film shows several modern attempts to keep the culture alive — hunting and fishing, for instance, reviving languages, the major importance of connection to the land, contemporary visual artists, even aboriginal rap music with strong messages. A Tribe Called Red appears is one scene and there’s a particularly resonant song at the end written by King and performed by Snotty Nose Rez Kids. The culture lives. (VIFF Connect streaming) 4 out of 5

THERE IS NO EVIL: Here’s another of those supremely humanistic films we’ve been seeing from Iran. This one is made by Mohammad Rasoulof, another director the regime has banned from making movies. For “endangering national security,” they say. To him, that shows “the intolerant and despotic nature of the Iranian government.” Those words were in his written statement when he accepted the top prize at the Berlin Film Festival, which he couldn’t attend in person. The restraints put on him in effect shaped his movie. He had to make it in secret and, the better to be undetected, as four short stories. That makes it uneven, but not lacking at all in power.

The subject is capital punishment, that enters the film as a shock in the first story, which seems to be a bland sequence about a man’s home life and then his drive to work. A bit there and totally in the three stories that follow, the film focuses on the men who have to do the job: the executioners. It seems that in Iran, most of them are army recruits under orders to carry out the mission. Some can do it, some crack. Two try to escape. There are repercussions from one story to another. They’re subtle; not hammered on, but part of the engrossing narrative in this film and a potent moral statement. (VIFF Connect streaming) 4 out of 5

THE CURSE OF WILLOW SONG: Karen Lam, who wrote, directed and co-produced this film, says it is inspired by the “open hostility” she sees here in Vancouver against the Chinese community. She’s referring to rich immigrants who drive high-end cars and bid up the price of real estate. As she writes in the film notes: “Are the welcoming arms of our Western countries only reserved for those Chinese and Asian immigrants who stay in their own lanes?” Good question and relevant subject, but I don’t see it in the film. Maybe in bits of dialogue (“The older generation was happy just to survive. That’s not good enough for me.”), but not as the upfront theme.

This is a genre film more like the horror and sci-fi field that Lam has worked in around here. Valerie Tian plays the title character, a young woman on parole after a stint in prison, living in a grimy SRO and forbidden to have contact at all with her drug-dealer brother, oddly named Mission. Of course, he’ll show up. That’s Screenwriting 101. She’s given a free place to stay, a warehouse in Surrey, has to avoid a man out for revenge, help out a friend, played by local singer Tempest Jade, and elude her brother. The twist is she suffers from delusions, which she’s had since age five, that shadows come alive out of the walls and terrify her. That’s when the genre takes over completely. No real estate talk after that. There is a fine scene early on where a job interviewer leers at her and talks about “pretty Chinese girls.” All in all, an interesting mix and well-directed, but less social commentary than claimed. (VIFF Connect now and in theatres Saturday night.) 2½ out of 5